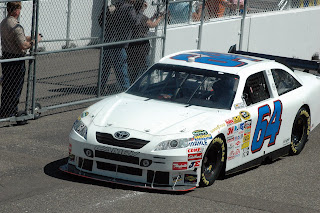 In the shadow of the media blitz about Jeremy Mayfield and his temporary win in court on Tuesday, other small budget NASCAR Sprint Cup teams scramble behind the scenes to get their team to the track. Larry Gunselman and his team are a good example of one of those teams that is celebrating their own good fortune this week … they landed a sponsor for the race.

Gunselman Motorsports has secured a major sponsor with Fred’s Hometown Discount Stores for this weekend’s Coke Zero 400 in Daytona. The Fred’s Inc. logo will adorn the hood and quarter panels of Mike Wallace’s No. 64 Toyota. “Decals are being applied at this very moment and our team is very excited to have Fred’s back on the car, this time, as a major sponsor and partner,” said Larry Gunselman, team owner. “With backing from Fred’s and with veteran racer and speedway specialist, Mike Wallace, behind the wheel, our team is going to attempt to do what Brad Keselowski did in Talladega, our team is going to do every thing in our power to win this weekend!” Fred’s Inc. http://www.fredsinc.com/ is headquartered in Memphis, TN and owns more than 600 stores and 300 pharmacies, which operate in 15 Southeastern states.

Gunselman Motorsports reports that they have been deluged with email from Mike Wallace fans wanting assurance that Gunselman Motorsports is fully committed to Wallace for this weekend’s Coke Zero 400 in Daytona. In an effort to quell rumors, Larry Gunselman, team owner of the No. 64 Sprint Cup Team, went on record this afternoon stating that, “ The major sponsorship deal with Fred’s would not be a reality without Mike Wallace. Frankly, he was instrumental in helping our team put the deal together and his speedway record speaks for itself. I have not entertained the idea of putting any other driver in, because frankly, it was the not only Mike’s record, but his reputation as a speedway driver, that helped our team close the deal with Fred’s. 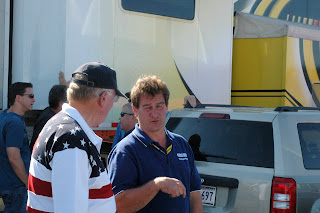 Gunselman, of Snohomish, WA who has been around Nascar for nearly 20 years, dating back to his first run in the NASCAR Camping World West Series (actually, it was the NASCAR Winston West Series back then) On September 30, 1990. Larry showed up at Tri-City Raceway in West Richland, WA with his own Pontiac and managed an 11th place finish. After 9 years, Larry had competed in 52 Winston West and 2 Winston Cup races.

The 64 team started the 2009 season with 3 drivers listed, Gunselman and the two Bodine brothers that started with him at Mach 1, Geoff and Todd. With a lack of sponsorship, the relationship with the Bodine’s faded and Gunselman Motorsports got hooked up with Michael Wallace as the current driver. Mike brings a wealth of experience to the team, having competed in a combined 633 races in Nascar’s top three series, since 1990, with 8 wins, 56 top 5’s and 130 top 10’s.

In 2004, Larry Gunselman founded Mach 1 Motorsports, an underfunded Cup team that made 26 of the 34 races on the schedule and finished 39th in points. Six different drivers drove the 98 car in 2004, including Geoff and Todd Bodine, Gunselman, Chad Chaffin, Derrick Cope and Randy Lajoie. The team dissolved at the end of the year but Gunselman remained in Nascar as a driver. Between 1996 and 2008 Larry competed in 115 races in Nascar’s top three series.