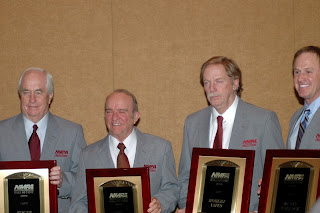 Friday evening January 17, members of the National Motorsports Press Association gathered at the Embassy Suites in Concord, N.C. to induct four members into it’s Hall of Fame. For over twenty years, members have voted to induct people associated with racing that have set the bar for high standards within the industry. The list over the years has included drivers, promoters, owners and members of the press. Some of those elite members have included Ned Jarrett, Harry Gant, the Woods Brothers, Chris Economaki, Barney Hall and Iron man Jack Ingram. 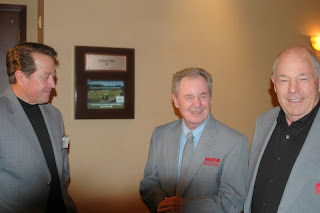 With legends like the above, adding new members to meet the standards is usually a tough job, but this year the voting was pretty easy. The first member, introduced by NASCAR president Mike Helton, was none other than 1989 NASCAR Sprint Cup Champion and now an announcer for ESPN and car owner Rusty Wallace. In the introduction Helton called Rusty “Our Jack Nicholas” referring to Rusty working with several developers on new track designs, most notably Iowa Speedway. Rusty expressed his surprise by the vote and spoke of being in awe of the company he joined. And he never mentioned the word Hot Rod.

The second inductee was introduced by 1999 NASCAR Sprint Cup Champion, Dale Jarrett. Dale talked about his former car owner Robert Yates, and his dedication to the sport. Robert expressed genuine surprise of the vote, even exclaiming, “I never thought you guys liked me, and I didn’t really give the media the attention I should have, so I really am surprised.” Yates talked about his childhood and heaped praise on his sister, a missionary, for helping him get his life together and completing his education. After retiring from racing Robert bought a 600 acre farm that he is working on as he uses his racing engineering skills with his new company developing tools for the farm industry.

Walt Czarnecki, Vice Chairman of Penske Racing took to the podium next to introduce Roger Penske. Czarnecki spoke of his years with Roger and Roger’s many forays into racing as a car owner, builder, track owner and developer. At one point Walt said, “We have worked together so long, Roger’s hair was black, and I actually had some.” As Roger shared some of his memories over the years, one comment shocked a number of people in the room, as he told how he bought Michigan International Speedway for $200,000.00.

Jeff Hammond was next up as he talked about his days working for Jack Roush, and Jacks knowledge and dedication. Jack, like the other inductees shared some of his memories as he told about his experiences in drag racing and how his success there helped him gain the finances to enter NASCAR. He talked about attending a race and being told by a NASCAR executive to stand behind him near the bathroom at a drivers meeting. He felt that was the message that the sanctioning body is in charge, as a result he was invited to enter a car in qualifying for the 1988 Daytona 500. He first asked Bobby Allison to drive for him, but Bobby told him that he wouldn’t drive for a Yankee. (Jack was born in northern Kentucky), so the choice to go with Mark Martin was an easy one. Speaking of his life as a kid, he talked about how he was always fixing things that were broke, and if they weren’t broke, he would break them in order to fix the. “My dad was glad when I left home because all the gadgets in the house had tinkeritis from me tinkering with them.”

At the end of 2010 the membership of the NMPA will once again consider candidates to be inducted for 2011, but this class set such a high mark we may never see such a stellar class.