Most of the teams in NASCAR’s top two tiers of racing are based in the Charlotte, NC area, lending to the nickname ’Race City’. As Bruton Smith says, “No matter what form of Motorsports you are involved with, you must have a connection to Charlotte.” So when you find a team in the top two series that is not based in North Carolina, you have to ask, why?

To answer that question, I took a trip recently to Warsaw, Indiana located in north central Indiana, home of ML Motorsports and the No. 70 Foretravel Motorcoach/Biomet Chevrolet. Warsaw is about a one hour drive from Notre Dame University in South Bend and is known as the ‘Orthopedic Capital of the World’ based on the fact that it is the home of four Orthopedic Device manufacturing facilities. One of those manufacturing companies BIOMET was formed by Dane and Mary Louis Miller, whose love of racing began with their very first date, at the races. After getting their company off the ground and it’s continued success it gave Mary Louis the ability to start her own ARCA team, 11 years ago with a race shop located on the outskirts of Warsaw.

After 7 years in ARCA, (2 of which were part time schedules) ML Motorsports finished in the top three in owners points in three of their five full time seasons, they moved up to a part time NASCAR Nationwide Series team in 2006. Over the previous four years the team had struggled with different drivers, different crew chiefs and a fleet of race cars with a wide variety of parts from several different manufacturers. 2009 was the year of changes, beginning with a new driver, Shelby Howard, some new cars from KHI and finally a new crew chief in Chris Rice. 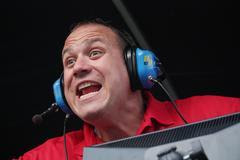 Chris Rice has a solid racing background and came to ML Motorsports after serving as crew chief on the Jay Robinson No.28 car with driver Kenny Wallace. Chris had past experience working with Howard in the USAR Pro Cup and the NASCAR Camping World Truck Series, where they were paired up at ThorSport Racing, so the driver/crew chief chemistry was already established. Rice is the lone Charlotte area link in this team as he travels back and forth between Warsaw and Charlotte. 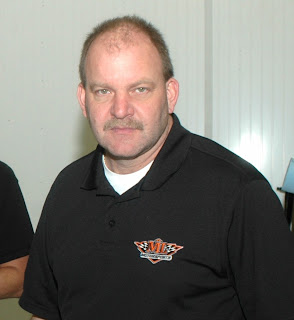 Team manager Tony ‘Toad’ Barnes has been happy with the changes that began last year and has developed a seamless working relationship with Rice. Even when Rice is home in NC, they compare notes on a daily basis and together they have made huge strides in streamlining the Race Shop. The team has all but abandoned the collection of miss-matched cars and parts as they transition over to Kevin Harvick Incorporated cars. As of my visit to the shop, they have one car in service that is not a KHI car, that is their current back up Speedway car, which will be retired after the Talladega Race. Also new for 2010 is the change over to Earnhardt Childress Racing engines, bringing the teams in line with similar equipment being used by Kevin Harvick Racing.

When I spoke with Toad and Chris regarding the pro’s and con’s of the team being outside of Charlotte, the first thing they both agreed on is that the shop help is more secure. With all of the shop employees being local residents, the team does not worry so much about the temptation of employees to move around the sport. They all work as a solid team and they sure seem to be comfortable with that scenario. They also all get to keep that small town family atmosphere. With the standardizing of Chassis and engines it also limit’s the number of out of town vendors that they must deal with. The biggest problem with the location is time lost and extra shipping cost for parts. The small parts are not a real problem, but when it comes to the larger items, it generally means freight cost or sending a company truck to Charlotte. Those trips require careful scheduling and ordering so the truck is able to make all the pickups in one trip.

Driver Shelby Howard is another Indiana native, residing in Greenwood, near Indianapolis, about a 3 hour drive from Warsaw. One big advantage for Howard and the Warsaw based crew is a more central location to the tracks. Of the 16 tracks the team runs, 11 are less than 700 miles from Warsaw, which greatly reduces travel time.

So, aside from the logistics of the team’s location in Indiana, all involved are looking forward to the start of the 2010 season with new cars, new engines and even a new paint scheme. Gone will be the traditional Blue and Orange colors (with the exception of Daytona and Talladega and in comes the new White with red trim and hood paint scheme on the Foretravel Motorcoach / Biomet Chevrolet.

Howard and Rice have recently completed several test sessions working alongside Kevin Harvick at Orlando, FL and before that at the GM proving grounds in Yuma, Az. Howard has been gaining valuable seat time while Rice has been able to work side by side with the KHI crew, comparing set up notes. The team is also looking forward to participating in the four ‘COT’ races beginning with the July Daytona race, and are hopeful that a successful season will mean running the full schedule in 2011.