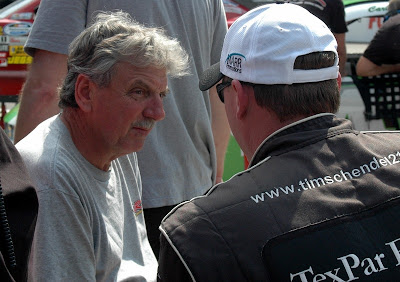 While he’s not necessarily a house-hold name, Jimmy Means has managed over the past 35 years to persevere with limited finances and second-hand equipment. He’s managed to keep himself firmly entrenched in the sport, even as teams with more money and better equipment infiltrate the Nationwide Series. Still, with the odds against him, Means has managed to survive when many other independent teams have fallen by the way-side over the years. Recently, at Bristol Motor Speedway, I had the opportunity to sit down and talk to Mr. Means about his career and what exactly has kept him going when other independent teams such as his have had to close up shop.
“I got my start in racing, running a Late Model car at Huntsville Speedway and decided to go Cup racing back in 1976.” reflected Means. “Back then, there were only about 10 or 11 teams that had the financial resources to run up front, so my goal was to be the best out of all the drivers who didn’t have as much as the big teams.” Eventually, however, owning and driving with limited equipment and little financial resources took its toll on Means. “It got to a point where it was costing way too much money to even be competitive as an independent and toward the end of my career, the only independents left were myself and Dave Marcis.” stated Means. Also, the tragic events of Speedweeks in 1994 when Neil Bonnett and Rodney Orr were fatally injured at Daytona were the last straw for Means. As he related to me “I was clocking Neil Bonnett with a stop-watch when he hit the wall at Daytona and was killed. Then a few days later, Rodney Orr got killed too and at that point, I said I just didn’t have the desire to race anymore.”
A few years later, the opportunity came up for Means to get back into car ownership with Moy Racing. “I worked a few years for Bud Moore until he had to shut down due to a lack of sponsorship. A few businessmen were wanting to start a team and the representative from Ford had me meet with them and we ran for about six or seven years. We ran pretty well. We won a race (at Hickory with Ed Berrier) and had some good qualifying efforts.” explained Means. Over the years, Means’ operation has had to resort to the oft-debated practice of start & parking. “You have to do what you have to do to survive.” explained Means. “Tires cost $2,000 and when you’re spending your whole purse on tires, you’re going to lose money real quick, so we have to do what we have to do to survive.”
Back in 2009 at Daytona, in a little-known fact, Means gave future Daytona 500 winner (and Knoxville, Tennessee’s favorite son) Trevor Bayne his first opportunity in the NASCAR Nationwide Series. “Myself and my former business partner, Bob Jenkins from Front Row Motorsports, put together a deal for Trevor to run here at Bristol. Bob supplied us with a car and sponsorship backing and we came here with Trevor and did pretty well.” Means said. With the advent of the Nationwide COT, Means has found the new car to be a bit of a double-edged sword. “We’ve been lucky with the car in some regards, as the body frame is basically a first-generation Cup COT and we have been able to find hand-me-down parts at a reduced rate. But by the same token, it’s just causing the costs to run in the series to sky-rocket and in the last few years, I’ve about gone broke just trying to stay afloat.”
Things were at their bleakest back at Speedweeks this year when Bobby Santos III had a ferocious accident that destroyed the only car Means’ team had. “We spent all winter preparing that car for Daytona, and through a mistake I made, we destroyed the car. At that point, I was ready to say “I’m done” because I didn’t have the money to rebuild another car.” But the team found an unlikely savior of sorts in Dale Earnhardt Jr. “Dale came up to me after the accident happened and said “You guys need a car?” So we worked out a deal with Dale Jr. to use his back-up car that week-end and he said that he wanted us to race it because he said you can’t make any money by parking it. TaxSlayer stepped up and sponsored us that week-end and we did pretty well at that race. That deal meant so much for us because Jr. didn’t have to do that, but that tells you what kind of a person he is.”
As for the rest of 2011, Jimmy Means plans to take things one race at a time. “We plan to run the full-schedule this year, but we still only have one car and if something happens to it, we’re not going to be racing for a while so we’ve got to take things one race at a time.” I’d like to thank Jimmy for taking time out of his busy schedule to do this interview and I wish him nothing but the best of luck in the 2011 season and hope he’s in the sport for many years to come.