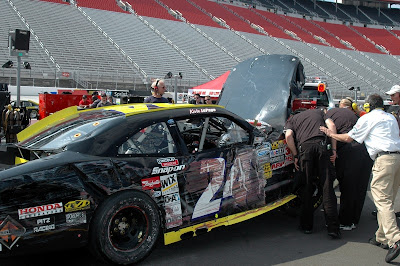 By Joe Dunn
(as seen on Speedwaymedia.com)
(BRISTOL, TN)  Carl Edwards turned in the fastest lap of NASCAR Sprint Cup qualifying to earn the Pole for the Jeff Byrd 500 (presented by Food City).Edwards’ teammate Greg Biffle  secured the #2 spot for an all Ford all Roush Fenway Racing front row but that effort was overshadowed by the tire woes experienced Friday at Bristol Motor Speedway.

From the beginning of the first NASCAR Nationwide Series practice Friday morning, it became obvious that there was a problem with tire wear.  As NNS teams reported excess tire wear Goodyear was quick to acknowledge that something was amiss with the tires brought to the track.

In addition to the excessive wear, another problem also became evident.  The track surface did not ‘Rubber up”, a build up of rubber imbedding into the track surface.  That was obvious to all as the normal blackening of the track was not at all occurring.  That lack of build up effects the long term wear of the tires as, under normal conditions it cushions the tire wear and reduced the ability of the track surface to grind rubber off the tires.

Goodyear was quick to notify NASCAR that it intended to bring an entire compliment of new tires to the track on Saturday.  The scheduled practices continued with the current tires as did the NASCAR Sprint Cup qualifying.  The only major victim of the wear Kevin Lepage in the NNS #24 car who had a right front tire go down putting him into the wall.  The damage to the car was extensive and the crew was working feverishly to read a back up car.

With the new tires arriving Saturday morning, and the Nationwide Series not having any practice on the  new tires, NASCAR decided that it would be best to conduct qualifying on the old tires.  Both the Scotts EZ SEED 300 and the Jeff Byrd 500 will have a NASCAR mandatory competition caution early in the race to check tire wear on the new tires.