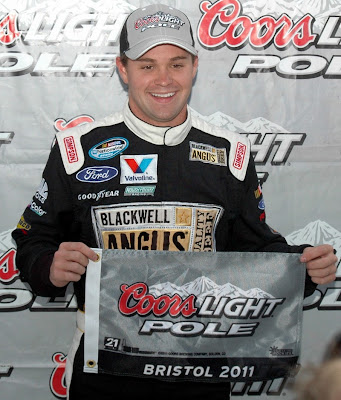 By Joe Dunn
(as seen on Speedwaymedia.com)
Carl Edward’s jumped to the provisional pole as he went out 22nd qualifying for Saturday’s NASCAR Nationwide Series race with a speed of 125.052 mph.  But the idea of Edwards grabbing both poles  was short lived.

Two cars later, Edwards’ teammate Trevor Bayne pushed Carl to the outside as he posted a lap of 125.461 mph, .050 seconds faster.    A few spots later, it was Jason Leffler hitting the top spot with a speed of 125.939, but the very next car out would be Edwards’ and Bayne’s teammate Stenhouse Jr. who took the top spot for the day with a speed of 126.071 mph.  This will be Stenhouse Jr’s second pole of his career, the first one coming at Iowa in 2009.  This will be his third top 10 start in 2011 and his third race at Bristol.

When the qualifying session was complete, Edwards was bumped back to 7th.  Start on the outside of the front row will be Leffler, followed by  last year’s winner Justin Allgaier, Bayne, and Kyle Busch starting 5th. Rounding out the top 10 will be  Elliott Sadler, Edwards, Kevin Harvick, Kasey Kahne and Joey Logano.

Only one car will miss the race, Chris Lawson who crashed during his qualifying run.  It should also be noted that these cars did qualify on the tires from yesterday as they had no practice on the new tires.