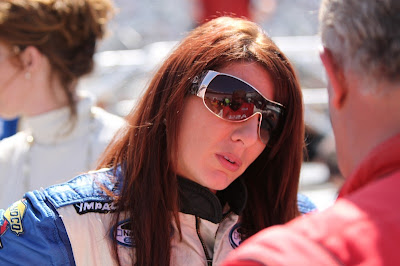 By Joe Dunn
It was a bizarre start to the NASCAR Nationwide series, Scotts EZ Seed 300 Saturday at Bristol Motor Speedway.  During the pace laps, NASCAR announced that the 79 car of Jennifer Jo Cobb was to start at the rear of the field due to a driver change.  It was announced at that time that Charles Lewandowski would start in the car, with no explanation as to why.

As the media scrambled to learn what happened, ESPN’s Dr Jerry Punch talked with Cobb who explained that the owner informed her moments before the start that she was to start and park the car.  Cobb was adamant that it was contrary to her racing ethics and refused to start.

As the 79 car sat behind the hauler with a right rear wheel off, and a driver, reported to be Chris Lawson strapped into the car.  The crew chief, Steve Kuykendall stood several feet away with some of the crew members.  Kuykendall informed this writer that they were Cobb’s crew and that they had been evicted from the hauler.  A local sheriff’s deputy was dispatched to the hauler where he stood by as a crew member was allowed to retrieve the team’s personal items.

.  So as the car sat with no crew, NASCAR officials stood by not letting the car go out until the owner could assemble a crew.  Efforts to speak with the car owner, Rick Russell for his side of the story were spurned.  With over 100 laps completed in the race, a rag tag crew was assembled  and the 79 car was allowed to start the race before parking 4 laps later.

I caught up with Jennifer Jo a few minutes later and she explained her side of the situation.  “ I was told 10 minutes before the race that , that the team owner had the right to have me black flagged and I was going to be forced to start and park.” explained Cobb, “That’s just against my principle and my mission as a race car driver. Jennifer Jo Cobb racing had purchased tires for the race today, so it was really a very ill timed decision for him to make.  It was explained to me that the idea was  so that the car could be in one piece for the race in California next week.  I said that as a business person and a team owner, I could understand that, but I asked him if he could assure me that I would be in the car in California, and he responded, ’No, you are not racing for me in California’.   I had a agreement with him for me to race the car in California, so I felt that we was breaking the contract.”

Cobb’s intention is to begin immediately to negotiate with team owners in hopes of securing a ride for next week in California and for the rest of the season.  The crew are all members of Jennifer Jo Cobb Racing, brought over to this car from her 2010 NASCAR Camping World truck series team