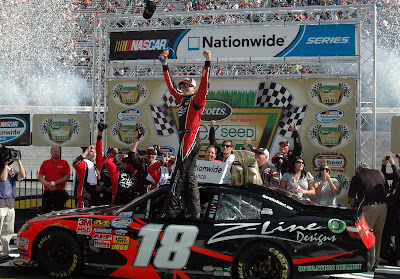 By Joe Dunn
(From Speedwaymedia.com)
The last time NASCAR was at Bristol Motor Speedway, back in August of 2010, it was the Kyle Busch show  as he swept all three top series races in the same weekend.  The spring race at Bristol does not include a Truck series event, so the Nationwide race is the first event.  Could this win could be the start of another sweep?

The 29th annual Scott’s EZ Seed 300 proved to be another event filled race after what looked to be a smooth start.  Other than a competition caution ordered by NASCAR on lap 25 to check for tire wear on the new tires provided Saturday morning, the race remained  green for 68 laps.  It was lap 68 when Robert Richardson Jr. made contact with the outside wall in turn three.  The damage to Richardson’s #23 car resulted in lots of fluid across the track which caught Trevor Bayne and forced contact with the outside wall that spelled trouble for his day, as he finished 3 laps down in 19th place.

The beginning of the race was not without it’s own drama as Jennifer Jo Cobb refused to start the race after being ordered by car owner Rick Russell to ‘start and park’ the car.  The car eventually started and parked after 4 laps, but not before the race had reached the 100 lap marker, with the third announced driver for the car.

The third caution for the day came on lap 183 as reigning Series Champion, Brad Keselowski cut a tire and made contact with the wall in turn 3.  The last 100 laps of the race would bring out five more cautions, slowing the pace of the race. The fourth caution came on lap 201 as Aric Almirola spun the 388 car down the front stretch, while  just 8 laps later the #05 of Willie Allen would crash on the front stretch. Lap 236 saw Bayne and Michael Annett wrecking in turn 2 while on lap 249, Danica Patrick would run into the left rear fender of Ryan Truex.    Although Truex would keep control of his car and drive safely away, Patrick went into a spin and collected the outside wall ending her day with a 33rd place finish.

The win was Busch’s second of 2011 and his third top 10 finish this year.  He also lead the most laps with 268, which set an all time record for the Series with 10,045 laps led.  This is also Busch’s 45th win in the NASCAR Nationwide Series.

Heading to California, Jason Leffler leads the series 2 point ahead of Ricky Stenhouse Jr, with Justin Allgaier, Reed Sorenson and Aric Almirola rounding out the top 5 in points.