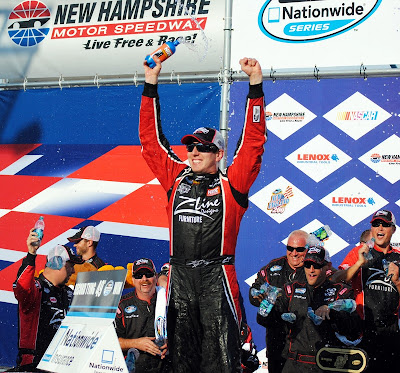 On a very warm and beautiful New England afternoon in Loudon, New Hampsire, Brad Keselowski ,in the Ruby Tuesday Dodge, took the pole for the 22nd New England 200. His lead was short lived, however, as Kevin Harvick took the lead away on the very first lap and held that position for the next 33 laps.

By the 25th lap, it was Kevin Harvick, Kyle Busch and Brad Keselowski pulling away from the pack. On lap Lap 33, Ricky Stenhouse Jr. with a little bit of help spun to the inside of the track off of turn 4 and brought out the first caution of the race.

The leaders pitted to make much needed changes and get new tires with some teams experimenting with two tires and some taking four tires to see what was the magic formula to track position and winning the lobster and trophy at the end of this race. Karl Edwards and Trevor Bayne won the pit road chase and restated 1 and 2 on lap 38.

Lap 102 Aric Almirola nearly wrecked and the 30 of Mikey Kile gets into the outside wall on turn 4 and brought out the caution.

At the drop of the green on lap 104, Jason Leffler in the 38 Great Clips car was hooked into the wall in turn 3 by Steven Wallace in the 5 Hour Energy car. A very unhappy Leffler brought out the caution once again and retired from the race with a badly damaged car.

Lap 111 they went back to green with furious racing on hot tires and even hotter drivers. Lap 116, Derick Cope in the 28 Maxelence.com Chevrolet blew an engine and brought out another caution.

During these pit stops, some teams tried fuel only for a strategy to gain track position. Brad Keselowski’s crew chief said they were good to go to the end of the race on fuel and tires. The cars restarted at lap 125 with the top 4 not pitting during the caution. The leaders, Kenny Wallace, Ricky Stenhouse, Jr. Mikey Kite, Jeremy Clements, Brad Keselowski the first car that pitted, Kevin Harvick, Joey Logano, Kyle Busch, Trevor Bayne, and Elliott Sadler filling out the top 10.

By lap 130, Brad Keselowski, took the lead back for the first time of the race. Jason Leffler returned to the race on lap 133 in the “rambling wreck, from Georgia Tech”. A car that was loose and mostly taped together.

Debris on the front stretch brought out the caution with just 34 laps to go. The top 5 stayed on the track and a lot of the rest of the field pitted to try to find something to help them finish in the lead.

The restart was a crazy 3 wide and some times 4 wide for the next several laps. Surprisingly without a caution. With 26 laps to go, Kyle Busch took the lead and started driving away.

With 15 to go, Steven Wallace was involved in another wreck that took tagged Kasey Kahne as well as several other cars including his uncle Mike Wallace.

With 6 laps to go, Steven Wallace himself was spun and the race ended up under a green white checker. Kyle Busch pushed past Kevin Harvick to take the lead with two laps to go and to finish with his 49th nationwide win to tie Mark Martin for the most wins in the series.