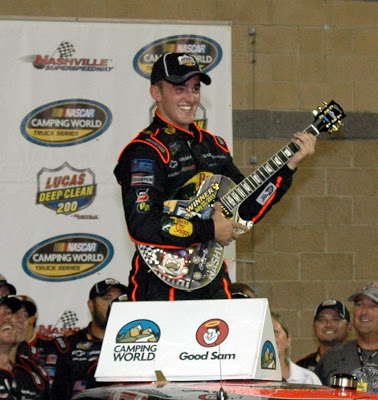 “Pawpaw warned me about the Sophomre slump, but I didn’t believe it until I was in it.” explained Austin Dillon as he addressed the media after his first win of 2011. He was in a slump compared to wins, but he was far from a down and out driver as he consistently runs up front each week.
Young Dillon made his intentions clear as he captured the pole for the Lucas Deep Clean 200 at Nashville Superspeedway on Friday afternoon. When the green flag dropped Friday night, he charged ahead to lead the field for the first 29 laps before giving way to Timothy Peters.
Throughout the night Dillon battled hard with Peters, Johnny Sauter, Ron Hornaday and teammate Joey Coulter to stay up front and in contention for the win. Four times Dillon charged to the lead, but the most important one was when he got past Sauter to lead the final 23 laps, including the checkered flag.
After his burnout on the front stretch Dillon exited his car and ran to the infield grass as he dove into the Camping World Series logo. It wasn’t a pretty slide and he nearly flipped over as his head and shoulders dug into the grass, but it was something different. One would not confuse this for the Carl Edwards back flip, but as he said later, “ I was , pretty good at the ‘Slip and Slide’ when I was a kid and I was looking for some kind of a signature celebration.”
This was Dillons first win and his sixth top 10 of the 2011 season putting within 18 points of series leader Sauter. Finishing behind Dillon were Peters, Sauter, Nelson Piquet Jr, Parker Kligerman (5th), Todd Bodine, James Buescher, David Starr, Elliott Sadler and Joey Coulter rounding out the top 10.
Four drivers from Friday’s Truck race will be on hand for qualifying for Saturday’s federated Auto Parts 300, they are Dillon, Sadler, Jennifer Jo Cobb and Johnny Chapman.