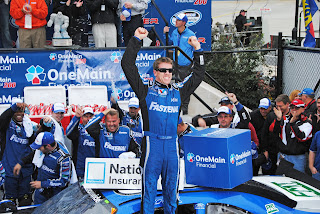 Carl Edwards Pulled off a great charge late in the race to win the Dover Nationwide Race. With 48 laps to go, the field pitted and Brad Keselowski came out in front with Carl Edwards and Kasey Kahne tailing the 22 Dodge.

However, in about 7 laps, Carl Edwards caught up to the 22 car and passed him never relinquishing the lead again till the end.
Unlike last year, there was no last lap crash to mar the race.
Elliott Sadler had won the pole but after a few laps lost the lead and then got pushed back in traffic after a caution for debris.
The top ten finishers were:
Carl Edwards
Brad Keselowski
Clint Boyer
Kasey Kahne
Ricky Stenhouse Jr.
Treavor Bayne
Reed Sorenson
Ryan Truex
Mike Bliss
Justin Allgaier.
The pole sitter, Elliott Sadler finished 14th.