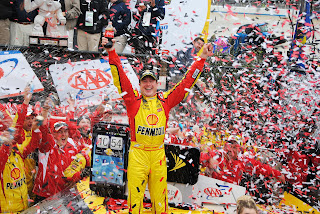 Sunday’s race day started cold and rainy but the rain stopped, sort of, to allow the vortex theory take hold and allow the fall Dover race to run all 400 laps.

The pole sitter, Martin Truex Jr, stole the pole from Kurt Busch by the smallest of margins but after a few laps faded to ultimately finish 30th in the race.
Carl Edwards took over the lead and looked like the strongest car of the field after only a few laps, while Kurt Busch slide back in the pack a bit during the first part of the race. After a series of pit stops with a mistake, Carl Edwards had a speeding penalty on pit road and had a pass through penalty that left him a lap down and Jimmie Johnson assuming the lead and looking like he was going to charge back to the front and win yet another race and championship.
However, after another series of pit stops, Kurt Busch drove his car and made it stick as he passed Jimmie Johnson and kept the lead for the last 24 laps of the race to finish in victory lane.
It was Kurt’s first win at the Monster Mile and left the elder Busch brother in 3rd place and 9 points back from first place in the chase.
The chasers standing and their finishing spot are shown below:
1 Carl Edwards -Finished 3rd
2 Kevin Harvick – Finished 10th
3 Kurt Busch – Finished 1st
4 Tony Stewart- Finished 25th
5 Jimmie Johnson-Finished 2nd
6 Brad Keselowski-Finished 20th
7 Matt Kenseth-Finished 5th
8 Jeff Gordon-Finished 12th
9 Dale Earnhart Jr.-Finished 24th
10 Ryan Newman-Finished 23rd
11 Denny Hamlin-Finished 18th