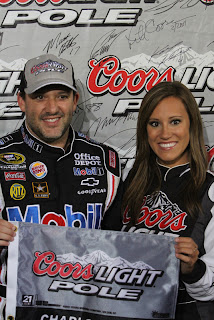 With his fast lap tonight, Stewart has claimed his 13th pole in 459 starts and his first of the 2011 season. This also marks the first time Stewart will start first here at Charlotte Motor Speedway.

The other nine Chasers will start sixth or worse with Ryan Newman (6th) and Jimmie Johnson (9th) the only other drivers in The Chase starting in the Top-10.

Kevin Harvick will start 14th, sitting one-point behind points leader Carl Edwards. Dale Jr had a run at the pole for a few drivers, but was bumped back to 15th when the fast cars hit the track. Denny Hamlin starts 17th, and Kurt Busch will go 20th. The No. 24 Drive to End Hunger Chevy of Jeff Gordon was shown 23rd when the dust settled and Kyle Busch managed to lock up a 25th starting position. Bad Brad Keselowski will start last out of all the Chase drivers in 26th.

Be sure to follow me on Twitter @ML_B_Lo for up to the minute news this weekend at Charlotte Motor Speedway. I am overly excited for all the racing action this weekend and look forward to the mayhem that will ensue on Saturday Night.