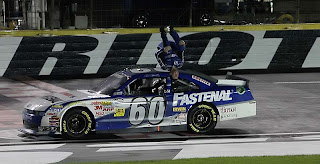 Carl Edwards has won the 30th Annual DollarGeneral 300 Miles of Courage here at Charlotte Motor Speedway. It was a rockyroad to the backflip tonight, but in the end it was a restart from hell fromKyle Busch that allowed Edwards the win.
Bypassing the first 180 laps of tonight’s 200 lap event, itall boiled down to 3 drivers when the checkered flag flew over the hood of theNo. 60 Fastenal Ford.
Paul Menard won the Coors Light Pole Award earlier today inNASCAR Nationwide Series Qualifying, but led only the first 26 lapsof tonight’s event when points leader, Ricky Stenhouse Jr. threw his hat in themix as possible contenders for the win.
A late race caution was not the issue for then-leader BradKeselowski, it was slowing down off of Turn number four here at Charlotte MotorSpeedway that took Keselowski out of contention for the win tonight. The spinunder caution put Kyle Busch to the lead with around 20 laps left, but theincident would not mark the end of the fireworks in the last 30 miles oftonight’s race.
Fast-forwarding again to the final restart, with just 4 lapsleft, Kyle Busch chose the outside line as his preferred line of restart. Therestart dragged all the way within 30 feet of the pink Start/Finish Line beforethe throttles were hammered. Busch squandered heading into turn number one, andthe fight was on for the win with Stenhouse Jr., Edwards, and Rowdy Busch allin the hunt for the point.
It was Edwards that flexed his muscles by the time the fieldmay their way back to my vantage point off the end of Pit Road here atCharlotte, and it was a 6 car-length lead that Edwards would take with 3 milesleft to run. Kyle Busch made his best efforts to reel in the battered No. 60Fastenal Ford Ford Mustang (the car was seriously trashed, Jack Roush said hewould actually kiss the car later tonight for staying together) but would onlymanage to sneak a peek under Edwards in the final turn.
Kyle Busch blamed the Toyota horsepower for the squanderedattempt to take the win, but it was the Fastenal parts of Carl Edward’s No. 60Ford Fusion that held up after he put a “Charlotte Stripe” on his torn racecar.
Edward’s victory is his 37th in 241 NASCARNationwide Series Starts, and his 8th this season. Trevor Bayne finishedthird as the highest finishing Nationwide Series points contender.
In the points, Elliott Sadler trimmed Ricky Stenhouse Jr.’slead to just 15 as the Nationwide Series takes a two week break from on-trackaction.
As always, be sure to follow me on Twitter @ML_B_Lo for allthe action from the track and a little humor mixed in. Until tomorrow, GoodFight, Good Night.