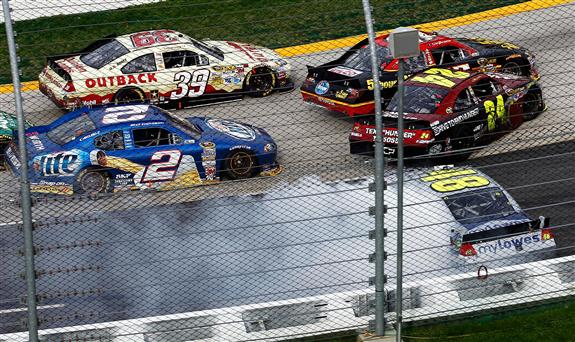 Ryan Newman survived the pair of Green-White-Checkered finishes at Martinsville Speedway to score the 16th victory of his career.

Lap 60 Kurt Busch to pit road with a flat tire

Lap 105 Restart as Gordon keeps the lead over Hamlin though turn one.

Caution Lap 245 Dave Blaney goes for a spin. Kahne goes behind the wall due to a motor issue. Some lead lap cars pit, others decide to stay out.

Caution Lap 264 Juan Pablo Montoya hits the inside wall after contact from Ken Schrader. Newman gets the lucky dog.

Restart Lap 368 and Hamlin leads Gordon off of turn two

3 to go Gordon and Johnson side-by-side for the lead as the caution comes up for Reuitmann being stalled. Stewart gest the lucky dog.

Green-White-Checkered…..Gordon and Johnson stay out as everybody else pits.

Restart……..Bowyer took Gordon and Johnson three-wide, sending all three for a spin……Keselowski just ran out of fuel while running third

Restart…….Newman and Allmendinger are side-by-side for the lead.