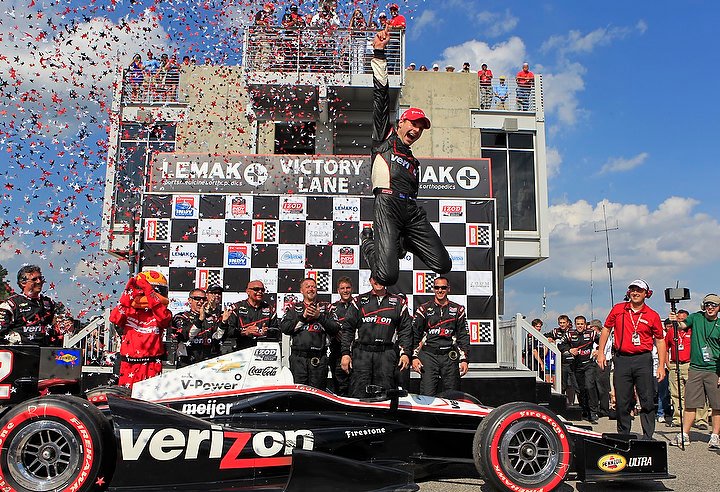 On the final restart with 16 laps to go, Will Power held Scott Dixon off to win the Honda Indy Grand Prix of Alabama for the second year in a row.

This marks the 16th career IndyCar victory for Power and the first of the 2012 season.

“That was an awesome race,” Power says. “(Team Engineer) Tim Cindric kept putting me in such a good position so we could use our speed. That last restart was kind of hairy. I knew Scott (Dixon) was going to be really quick and hounded me for a couple laps there. It’s good to get the Verizon 12 car in victory lane with a Chevy engine. It was awesome.”

Power started the race in the ninth position, making a daring three-wide pass on lap one. He consistently worked his way through the field, getting the lead from Dixon following a round of pit stops.

“(My crew was) on the money today,” he says. “Without these guys, there’s no way we could have won today.”

Power’s win kept the Team Penske seal on Barber Motorsports Park going as Penske has won all three races there. They won the last two years with Power and won in 2010 with Helio Castroneves.

Dixon would come second for his 27th second place finish of all-time after leading the most laps.

“I think today we did a good job,” Dixon says. “We got caught up there in some traffic in the pit, the pit sequence kind of got us there. All in all, Team Target did a fantastic job with Honda, I think we’re starting to get on something with this car, so hopefully in the next few races we might be looking at the top spot on the podium.”

“First I want to thank AAA, Shell/Pennzoil, Verizon, SKF—those guys give us great support,” Castroneves says. “To be honest it was very difficult. Those are my tires from qualifying. Unfortunately, I locked a little bit too much, I used them a little bit too much. I mean it paid off starting from the pole position, but certainly hurt me a little bit, actually a lot, in the race. That’s why (Scott Dixon) was able to go off of Turn 2, good run but I was just staying in the middle and not do too much. But in the end, I thought it was a great battle, I think that’s what [racing’s about], and I want to apologize as well to (James) Hinchcliffe. My car was already bad with those reds and as soon as we restarted the race it pushed so bad that we kind of squeezed him and I felt terrible. We were having a great race, hopefully we’ll have a better one next time”

Graham Rahal would finish fourth for his first top five finish this year, while Simon Pagenaud finished fifth for his best IndyCar finish since a fourth place finish at Edmonton in 2007. Pagenaud now leads the Sonoco Rookie of the Year Standings, 26 points over Josef Newgarden. Newgarden finished the race in 17th.

With back-to-back wins to start the season, Chevrolet leads the Manufactures Championships six points over Honda.