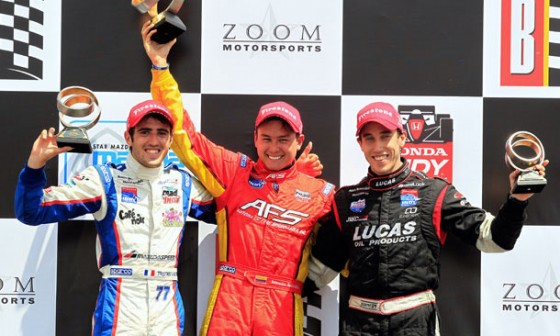 After starting on pole, Sebastian Saavedra remained strong throughout the day to win the 40-lap Grand Prix of America at Barber Motorsports Park. It marks his fourth victory in the series, his first on the season.

“I think we did an incredible job,” Saavedra says. “The car was great in the beginning, we were able to manage a very good gap on Tristan (Vautier), and at some point we started saving tires. It didn’t work very well. I think when I needed the tires to help me out when Tristan was getting close to me, they were not there. Fortunately it was only five laps to go. They threw me a curveball over there with that restart but I think we kept a very cool head, very calm, and we did it perfectly.”

“I’m quite satisfied about the race,” he says. “Second is very good, of course, you love to win, but the Andretti guys were very strong in the open testing, we knew they were the ones to beat and we got very close at the end of the race. I tried at the start, when I saw Sebastian pulling away, to save my tires and try to do a move at the end and catch him at the end and it almost worked. Then we got the yellow flag, which cost us a few laps and it was quite close between us three on the restart, but then another yellow flag. So it was just you know, I have to thank the Sam Schmidt guys, it was a consistent car today.”