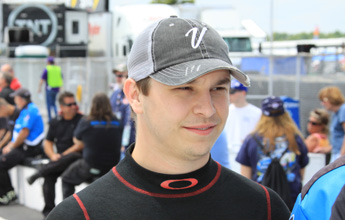 After winning the previous two ARCA Racing Series events with Brennan Poole, Venturini Motorsports looks to continue their streak through Michigan International Speedway as Kevin Swindell led the practice session. It marked the first practice on the newly-repaved track for the ARCA cars.

Swindell, the three-time defending Chili Bowl Champion, topped the charts with a best lap of 37.278 seconds. If Swindell is able to lay down that lap during Friday’s qualifying session, he will be beat Cale Gale’s track record by 3.5 mph. In total, five drivers beat the track record in the practice session.

Coulter Motorsports teammates Joey Coulter and Matt Lofton were second and third on the charts. Coulter was excited about the racing this weekend, knowing it’d be exciting after the re-pave.

“It’ll definitely be fast, which we saw in the test session last month, but it’ll allow us to run multiple grooves with less tire ware,” Coulter commented. “If we keep our Chevy out of trouble, I know we’ll be in contention at the end to win.”

There were several incidents during the 95-minute practice session, but nothing too serious.

Menards Pole Qualifying presented by Ansell begins on Friday at 10 a.m. with the 100-lap, 200-mile race at 5 p.m. The race will be aired live on SPEED. ARCARacing.com featuring live timing and scoring coverage for both the qualifying session and the race.