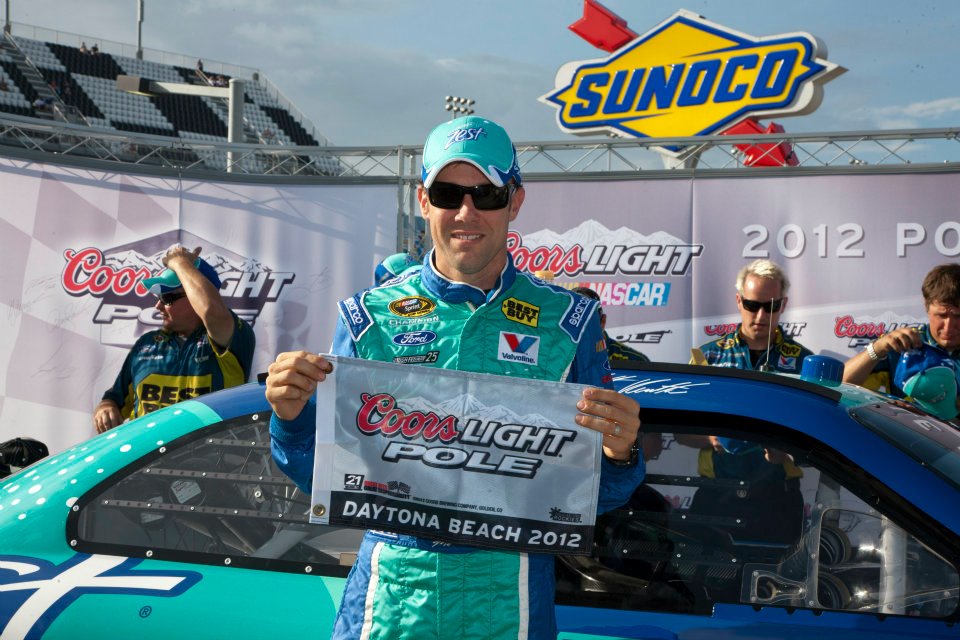 Just like February, a Ford is on the pole for a Sprint Cup race at Daytona.

For the first time in his career, Matt Kenseth will start a Cup race at Daytona on the pole after winning the pole for Saturday night’s Coke Zero 400.

Kenseth’s lap of 192.386 mph outlasted the final 12 qualifiers—which included both of is Roush Fenway Racing teammates, Greg Biffle and Carl Edwards—for the eighth pole of his Cup Series career.

“It feels good, but I really had nothing to do with this,” said Kenseth to Speed after qualifying had been completed. “It’s really all these guys behind me at Roush Fenway Racing that prepare these really fast race cars.”

After winning the season opening Daytona 500 back in February, Kenseth will attempt to become only the fifth driver to win both the Daytona 500 and the Coke Zero 400 in the same season.

“In impound configuration[where crews are not allowed to work on the cars after the qualifying session is completed] it certainly tells you your car has enough speed.

“This car ran terrific at Talladega for us. I had a little bit of damage, and I didn’t do a good job on that last restart keeping Greg[Biffle] with me. I feel like I lost the race for these guys.

In the first two restrictor plate races of the season(Daytona and Talladega), the Fords have had the upper-hand when it comes to both horse power and cooling engines in the big packs.

With race-time temperatures being in the 80 degree range, keeping engines cool will be a challenge drivers face tomorrow night.

“You never know how the race is going to unfold,” Kenseth continued. “Greg[Biffle] had a really strong car and I was able to work with him at both of them races.

“We were able to get our cars together which made both us fast. Hopefully that’ll happen again.”

Stewart will start the race from the forty-second position.

With 44 cars attempting to qualify for the Coke Zero 400, one driver was forced to head home.

Robert Richardson Jr. was the first driver to qualify in the session and will head home after his lap of record wasn’t fast enough to make Saturday night’s event.