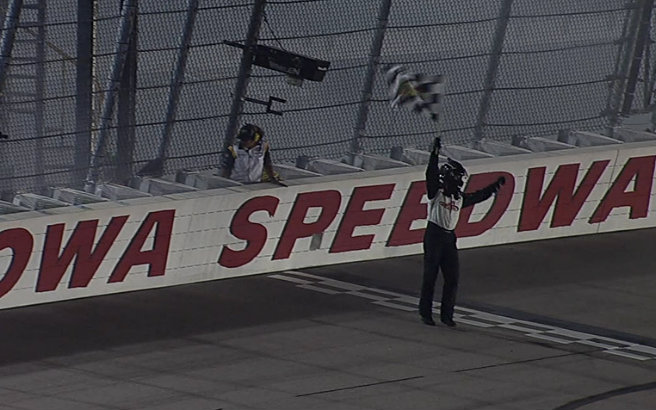 Throughout the 2012 Camping World Truck Series season, consistency was the name of the game for Timothy Peters.

Not winning a race in the opening eight races, Peters started off Saturday night at the Iowa Speedway by taking the pole, getting out to an early lead in the process.

James Buescher would eventually pass Peters, jumping out to lead 91 of the 200 laps before a flat right front tire took him out of the race.

That left Peters in the lead as the race neared the end.

After Ron Hornaday Jr. grabbed the lead on a late race restart, it looked as though Peters would be once again relegated to being the smooth, consistent driver he’s been so far in 2012.

Late cautions however payed dividends for Peters, taking the lead on the final restart of the night to win the American Ethanol 200.

“Man, you don’t get trucks like this often, and man it was dominant,”said Peters in victory lane after his first win of the 2012 season. “This is for my dad. It’ll be 11 years on Tuesday I lost my dad, so this is for him.”

Even though Peters started on the pole, the majority of the 31-year-old’s race was spent from the second position. It wasn’t until the race hit 10 laps to go when the driver of the No.17 truck flexed his muscle on the 7/8-mile Iowa Speedway.

While the win is a boost for Peters’ season, his Red Horse Racing team now has some new bragging rights when it comes to winning in the Truck Series in 2012

Although Peters has been by far the most consistent of the Red Horse Racing drivers this season, his win at Iowa made him the third driver to win for the team in 2012( John King at Daytona, Todd Bodine at Dover), making the organization the winning-est team so far this season.

“Last year, this race right here was a reset race for Butch Hylton(crew chief) and myself,” said Peters.

“We just made a notebook, and we got on a role over the off-season and implemented a lot of good stuff and our Toyota Tundra’s are fast.”