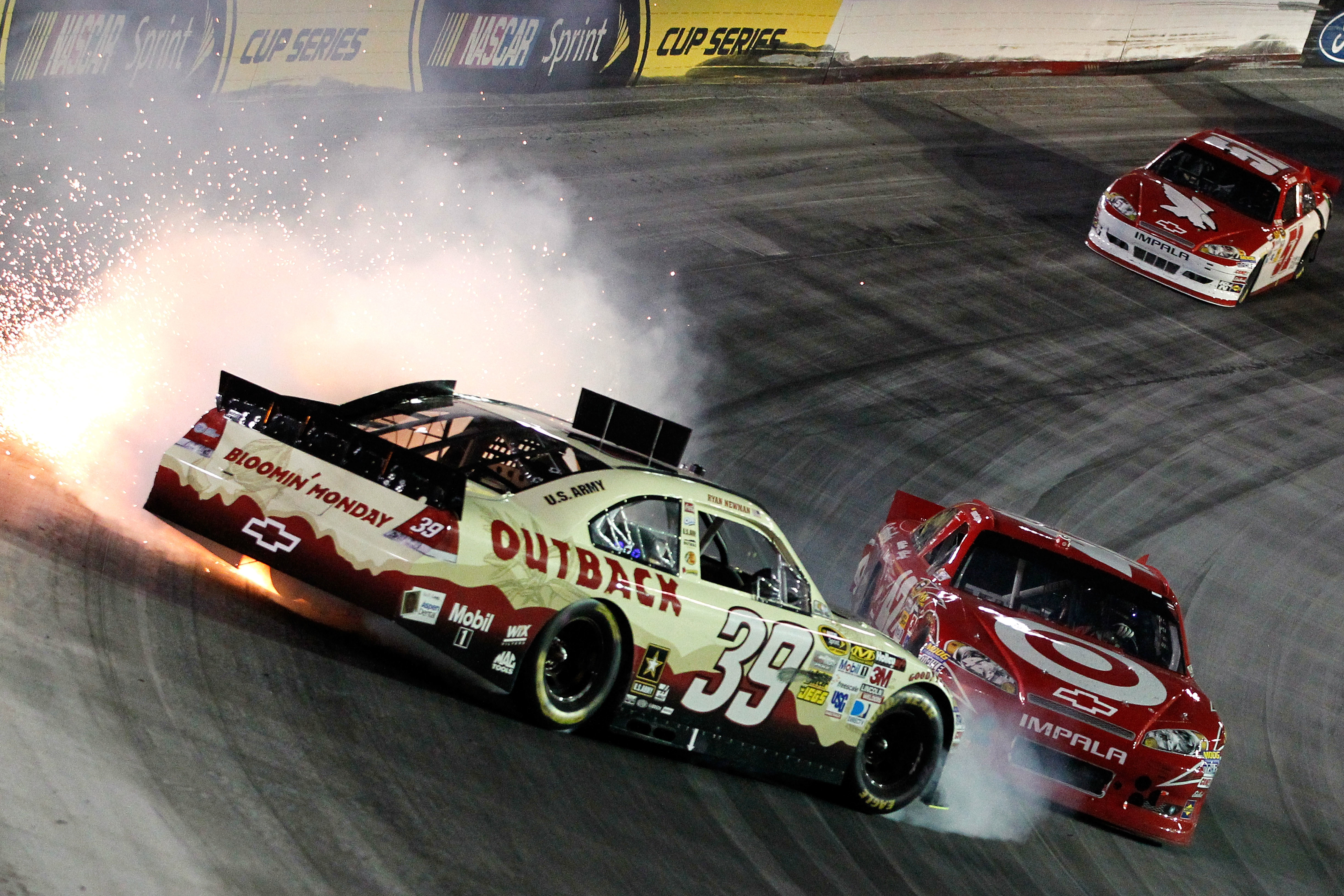 In what may have been the most exciting race of the 2012 season, Denny Hamlin laid claim to his first victory at Bristol Motor Speedway in the Irwin Tools Night race.

“The night race at Bristol, it’s just you talk to a casual race fan and you talk to anyone that doesn’t know a whole lot about NASCAR and they will always ask you, if I want to go see a race where should I go, and everyone says, the Bristol night race,” said Hamlin post-race.

” It’s the most exciting racetrack that we have on our circuit far as competition is concerned, and you know, just this is one of the races that me and my dad and my mom used to just love watching.

“This is one that we could not wait to get home Saturday night to see this race, and so that’s what makes it so special for me is watching this race for so many times.”

While Hamlin was the driver on top, here’s a look at how all 43 drivers fared on Saturday night.

1. Denny Hamlin-  Not the dominant car on the night, but he probably had the strongest car throughout the night. Hamlin was one of the few drivers that could pass on the bottom of the race track, but he didn’t need that to win the race. Using the new version of the bump-and-run, Hamlin took the lead from Carl Edwards to win his first race at Bristol.

2. Jimmie Johnson- After starting the night 37th, Johnson’s team used early race strategy to get the No.48 towards the front of the field. Despite overheating issues early in the race, he was able to take the race lead towards the mid-race point. A late race stop for fuel under caution may have cost him a shot at his second Bristol win.

3. Jeff Gordon-  It wasn’t an ideal night for Jeff Gordon, but it was the type of run he needed to keep him in the wildcard race. Running in the top-10 the majority of the night, Gordon battled for the lead on occasions, hit the wall, fell back, and then charged back to the front through pit strategy to salvage a third place finish.

4. Brian Vickers- For a moment, it looked as though the night for Brian Vickers was over when a flat tire forced him to pit under the green, losing two laps in the process. With a fast race car and good breaks on cautions, Vickers found himself battling for the lead with Carl Edwards late in the race, only to slip while doing so.

5. Marcos Ambrose- The No.9 was another car that had the ability to pass seemingly wherever they wanted to. Ambrose ran towards the front half of the running order throughout the night, fighting his way inside the top-five when Edwards slipped from the lead back on through the pack. Wildcard hopes still alive for the Aussie.

6. Kyle Busch- Starting the night with brake rotor issues, Busch was also charged with an early-race speeding penalty. From there, it was an uphill battle for the five-time Bristol winner with his team never dialing in the handling on his Toyota all race. Truth be told, Busch doesn’t like the new-new Bristol.

7. Clint Bowyer- At the mid-race point, Bowyer quite possibly had the strongest car. While he didn’t lead a lap all night, Bowyer was able to make his way through the field despite track position. When push came to shove, the No.15 restarted mid-pack and raced his way up to a top-10.

8. Joey Logano- Leading the most laps in a single race in his Sprint Cup career, Logano looked to be on his way to a Bristol sweep of Nationwide and Cup races. Track position and pit strategy was the ultimate downfall for the No.20 car, though.

9. Kasey Kahne- Much like Logano, Kahne looked to have one of the strongest cars after pulling out to over a 2 second lead quickly. However, his luck ran dry when he hit an oil slick from the spinning car of David Ragan. Kahne’s car was damaged and fought from 27th to ninth.

10. Paul Menard- It was a quiet night for the Wisconsin native at Bristol, but solid none the less. Menard ran inside the top-15 seemingly the entire race, never having a strong enough car to challenge for the top-five. Highest finishing Richard Childress Racing car.

11. Martin Truex Jr.- After a strong start to the night which looked as though it could result in his fist win sine 2007, Truex Jr.’s car seemed to fade as the race passed the halfway distance. With a finish outside the top-10, it ends Truex Jr.’s streak of top-five finishes at Bristol.

12. Dale Earnhardt Jr.- Much like Johnson, Earnhardt Jr. had overheating issues during the race. Although he cracked the top-five on occasion  his car was never strong enough to challenge for the win. A pit road penalty for pitting too early worsened his result.

13. Juan Pablo Montoya- A call early in the race for two tires, Montoya flexed his muscle inside the top-five early on. A run-in with Ryan Newman soon after was about all the noise making the No.42 did from there.

14. Bobby Labonte- His contact with Brad Keseslowski was about all the mention you heard about from the 2000 Cup champion, but his patient approach to the night proved wise scoring his best finish outside of Daytona this season.

15. Kevin Harvick- For a while, it looked as though Harvick was going to have his best finish in quite some time with Gil Martin back as crew chief. Not even a new crew chief could salvage the night for Harvick who was 25 laps short on fuel and was forced to give up track position.

16. Regan Smith- Solid finish despite being involved in multiple incidents and having a finger waved at him by Danica Patrick after a late race tangle between the two. Smith’s car looked like a classic Bristol machine, damaged and all.

17. Jamie McMurray- Exactly ten spots worse than his result at the track in March, Bristol has been McMurray’s best track of 2012. You didn’t hear much about him all night, but McMurray held serve around the 20th position all night long.

18. Travis Kvapil- After starting 42nd, not much was expected out of the night for Kvapil. But, his 18th place finish marks back-to-back top-20 finishes for his No.93 team. A consistent charge through the pack with pit strategy did the job.

19. Greg Biffle- Although he lead a potion of the race, the No.16 never had the speed or the handling to contend with the front runners. A late race pit stop sealed the fate for Biffle in the rundown, but he did clinch a spot in the Chase through it all.

20. David Gilliland- Finishing exactly where he started, Gilliland was the highest finishing of the Front Row Motorsports entries. He was involved in the lap 230 caution with the No.43, but was able to salvage a top-20 finish through the ordeal.

21. Casey Mears- Starting on the pole and leading the opening 26 laps, Mears fell back through the field faster than a rock through water. Swiping the wall late in the race, Mears was able to finish on the lead lap putting a cap on a solid weekend.

22. Carl Edwards- From leading the race with 50 laps to go, Edwards lost the lead to race winner, Denny Hamlin, after a bump-and-run move forced the No.99 to slide back through the pack. After missing the call to pit under caution, Edwards ran out of fuel with five laps to go.

23. Michael McDowell- After giving the pre-race invocation, McDowell had the rare opportunity to race the entire 500 laps tonight. Keeping his car out of trouble the entire night, he benefited form a “free pass” early on, to finish the night four laps down.

24. Landon Cassill- During an early round of pit stops, Cassill made contact with race winner Hamlin in pit road while he was entering his pit box. A quiet night for the Iowa native, he overcame the early race damage to finish the night ten laps down.

25. Matt Kenseth- Brake issues early in the race turned out to be the least of Kenseth’s worries on the night. Battling with Tony Stewart for the lead, the two crashed on the front-stretch, damaging their cars and shots to win. Kenseth was also victim to a helmet throwing contest starring Stewart.

26. Dave Blaney- Running as high as twelfth, the night looked promising for Blaney. After making an incredible move to avoid the spinning car of Kurt Busch, Blaney’s night was soon cut short after a crash.

27. Tony Stewart- Falling a lap down early, Smoke battled his way up to the second position due to pit strategy, only to crash while taking the race lead from Matt Kenseth. On top of a damaged race car, Smoke lost his helmet after hurling it at the Kenseth car. Expect no breaks for Kenseth from Smoke over the next few weeks.

28. Kurt Busch- By night’s end, Busch may have had the ugliest car in the race. With his deck-lid sticking up towards the sky, Busch found himself in a mid-race crash with Regan Smith, sending him behind the wall for repairs. He finished 60 laps down after resuming on the track.

29. Danica Patrick- For some time, it looked as though she would be the top-placing Stewart Haas car before contact with Regan Smith ended her night. Running as high as 19th, Patrick had her best run in her four Sprint Cup starts thus far.

30. Brad Keselowski- Entering as the pre-race favorite, his night was cut short quickly after contact with the wall, then was hit by the No.47 of Bobby Labonte. After an visit to the media center, Keselowski resumed to finish the night 66 laps down.

31. Jason Leffler- With enough sponsorship to run the full race, Leffler got his night started off with a bang after contact with Ken Schrader on lap 10, something Schrader wasn’t pleased with. Leffler was 83 laps down.

32. David Ragan- In a blaze of fire, Ragan’s spin after cutting an oil line sent him behind the wall for his team to make repairs to the No.34 Ford. Ragan would resume competition, but he looked like he as in the modified race from Wednesday.

33. Jeff Burton- This No.31 team can’t catch a break. Running what may have been his best race of the season, Burton was collected in the crash that claimed Ryan Newman after locking up the brakes and sliding into the parked No.39 car.

34. Sam Hornish Jr.- Hornish Jr. looked more like “Sideways Sam” than the driver we saw the past two races. Tagging the wall early in the race, Hornish was involved in the third caution of the night. He would only complete 343 of the 500 laps.

35. Aric Almirola- In the races early stages, it looked like the No.43 would be a threat for the race win. But, colliding with David Gilliland put and end to his promising night.

36. Ryan Newman- Starting off the night with a fast car, Newman’s night was cut short after contact with the No.42 of Juan Pablo Montoya. With the “frame in the motor”, the No.39 never resumed action.

37. David Stremme- The Inception Motorsports team only completed 187 of the 500 laps before retiring with what’s classified as a rear gear problem.

38. Josh Wise- The lowest finishing Front Row Motorsports car, Wise parked his No.26 for the night after completing 150 laps with brake issues.

39. Joe Nemechek- Apparent electrical issues ended the night early for Nemechek’s Toyota after only racing 130 of the 500 laps.

40. Stephen Leicht- After fuel pressure issues got the best of the No.33, Leicht parked Joe Faulk’s Chevrolet after only 56 laps.

41. Scott Riggs- Making only 20 laps in his Chevrolet, Riggs retired from the race with brake issues.

42. Ken Schrader- Although he had sponsorship to run the full race, the No.32 only completed 10 laps after contact with Jason Leffler ended his night.