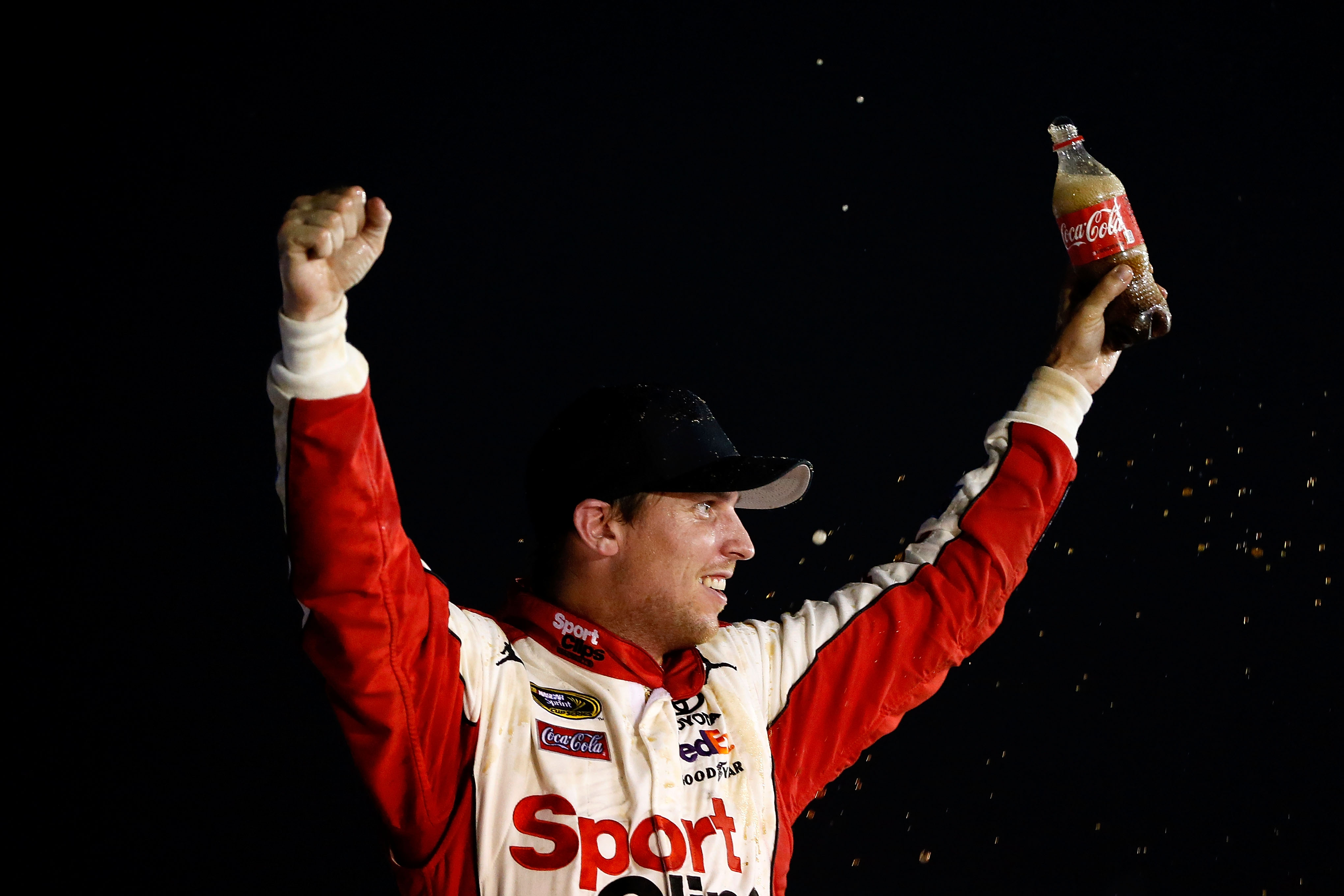 Denny Hamlin has the momentum factor in his favor.

After starting the night out with one of the fastest cars on the track, Hamlin took the lead for the first time on lap 35 from teammate Kyle Busch.

From there, Hamlin kept his No.11 Toyota among the front runners, taking the lead on four different occasions from lap 82 to 221.

As the night went on however, it appeared as though the rest of the field was on the same level as Hamlin, falling to the back-half of the top-five as Kevin Harvick paced the field.

As more and more laps pilling up on the leader board, Martin Truex Jr. was sailing away to potentially his first win since Dover in June,2007, a streak of 191 races.

The caution flag came out for the final time with 6 laps to go, it looked to be a break for Jeff Gordon, who was closing the lead Truex Jr. had over him as the laps wound down.

With tires meaning everything on Atlanta’s worn-out surface, all 13 cars on the lead lap went to pit road, taking four tires for the green-white-checkered finish with Hamlin beating Truex Jr. off pit road by half the length of his Toyota.

Coming to the restart, Hamlin chose the inside line which had proved superior the entire night with Truex Jr. on his outside and Gordon on his bumper.

Getting the all important jump, Hamlin rocketed away from the No.56 of Truex Jr., with Gordon pushing Hamlin into the first corner.

Making one final run at Hamlin in the third turn, Gordon pulled to the outside looking for his second win of the season.

After a slip, Gordon’s momentum through the corner was lost and Hamlin took the checkered flag in Sunday night’s AdvoCare 500 at Atlanta Motor Speedway.

“This is a race I had circled on my calender for a long time. Anywhere there’s tire wear, I feel like that’s my strong suite,” said Hamlin after  the race in victory lane.

“I feel like I’m really good at saving tires and I knew that at this race track wins had slipped from me the last two or three years.

“This was a championship team today. Once the splitter started wearing off the car from running the bottom, our car started fading towards the end and obviously the pit crew picked up when we started to fade.

“This is what it takes to win championships. When one person falls, the other is there to pick you up.”

Sunday’s win marks back-to-back victories for Hamlin in the Sprint Cup Series, his 21st career victory in Sprint Cup, and his fourth win this season which leads all drivers in 2012.

Those four victories assure Hamlin of at least tying for the No.1 points position after they reset the field for the Chase based on the amount of wins for the top-10 drivers in the standings.

“We went through a little bit of a rough stretch. We had like four or five DNF’s (Did Not Finishes) in like seven or eight races.

“That’s very uncharacteristic of this race team. But, through wrecks and mechanical failures, things like that, we got those bugs worked out.

“I knew this stretch of races was going to be opportunities for us to gather up some bonus points.”

Heading into Richmond next weekend to finalize the field for the Chase—a track which Hamlin has two victories at—Hamlin has yet another chance to win at the track which he calls his favorite.

Tonight’s race played a big role in deciding who would lock into the Chase for the Sprint Cup.