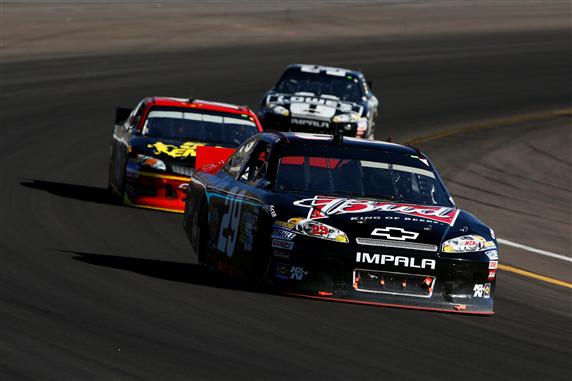 It was quite the weekend for Kevin Harvick at Phoenix.

On Friday, rumors surfaced of his departure from Richard Childress Racing at the end of the 2013 Sprint Cup season and move to the team owned by his friend, Tony Stewart.

Among all of the talk, there was still a race to be run. A race that Harvick very much had a shot of winning.

Running inside the top-10 for most of the day, Harvick was able to move up into the top-five on a round of pit stops, placing him in contention with the leaders for the first time in the race.

While Harvick was near in the front on the leader board, he wasn’t quite able to contend with the front runners, Kyle Busch, Denny Hamlin and Brad Keselowski.

But when Jimmie Johnson hit the turn four wall with 76 laps to go, the championship battle and the race turned upside down.

Looking to have the race well in hand, Busch checked out to a large lead and was surely on his way to his second win of the 2012 season.

However, a caution when Sam Hornish Jr. hit the turn three wall created an eight-lap dash to the finish to decide Sunday’s AdvoCare 500.

Taking the lead on the outside, Harvick passed Busch and began to pull away. Behind him, however, a mess ensued when Jeff Gordon turned into the No.15 of Clint Bowyer, collecting Joey Logano and Aric Almirola in the process.

After NASCAR and security at Phoenix International Raceway took control of the incident, the race resumed with Harvick and Busch back on the front row with Harvick, once again, getting the jump on the No.18.

Coming to the white flag behind the leaders, the Chevrolet’s of Danica Patrick and Jeff Burton made contact entering turn tree, sending Patrick in the wall in a cloud of smoke which left fluid dripping on the track.

Despite this, NASCAR opted not to throw the caution flag and have the field race back to the checkered flag while the smoking No.10 of Patrick moved vulnerably down the front stretch, still leaking fluid.

As the leaders made their way back to the front stretch, Harvick was able to cross the line first to win the AdvoCare 500, but a crash after Greg Biffle slid in the fluid left by the Patrick car sent him into the Chevrolet of Kurt Busch, creating a pileup as more cars continued to race to the start/finish line.

“We just got a good restart at the end and I just told myself, ‘heck with it, whatever happens, happens,'” said Harvick post-race.

“Our guys just did a good job with keeping track position and saved fuel a lot of the day to be able to put ourselves in a position to be in the right windows as we got towards the end.”

Sunday’s win his Harvick’s first time in victory lane in the Sprint Cup Series since he won at Richmond International Raceway in September, 2011. A span of 44 races between wins.

Although being in victory lane for the first time after a frustrating season surely is something to be happy about, Harvick was non too pleased with the way the end of the race was handled by the NASCAR officials.

“There was more oil then there was asphalt,” said Harvick regarding the run to the finish.

His car owner, Richard Childress, echoed the thoughts of his victorious driver after picking up his team’s first win of the season.

“It was very dangerous,” Childress added to his driver’s comments.

But as always, there are two sides to every story and that was no different today regarding the finish of the race.

“At the time, she came around and she was out of harms way,” said NASCAR’s Director of Competition, Robin Pemberton. “We didn’t see any fluid or anything. She rode around on the apron.

“When she pulled up on the race track, there was smoke that looked like tire smoke.

“It’s easy to look back on it obviously and wish that maybe you did something different, but at the time, it didn’t appear that there was any fluid coming out of the car.”

While the end of the race certainly sparked discussion as to whether the right or wrong call was made and whether penalties should or should not be assessed to drivers and teams, there’s one thing that is certain. Keselowski is back atop the point standings heading into the season finale at Homestead after Johnson’s late-race crash.

“My initial thought was that I heard he blew a right-front tire and I was thinking ‘What conspiracy theorist was going to come up with a theory on this one,” said Keselowski.

“But then you realize the same thing can happen to you and you try not to let that get into you too much and focus on what you got and make sure you don’t have the same problem.

Keselowski now leads the standings by 20-points with just one race remaining in the Chase for the championship.