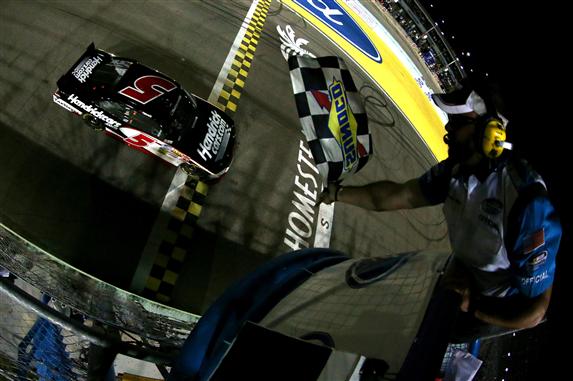 The past month has been quite the whirlwind for Regan Smith.

Following the Sprint Cup race at Talladega, he found himself out of a ride as Kurt Busch was set to takeover his ride for the remainder of the season and into 2013.

That left Smith without a ride, until a text message from Steve Letarte brought him to arguably the best opportunity of his racing career, a chance to fill in for the injured Dale Earnhardt Jr.

In those races, Smith showed he was capable of running well in big-time equipment. Running strong at Charlotte, his night was ended early after his Chevrolet lost an engine. And at Kansas, he scored a top-10 finish on a track which proved to be treacherous.

Afterwards, Smith was praised by Letarte and the entire No.88 team for his service filling in during a difficult time.

It was announced soon there after that Smith would drive for Earnhardt Jr. in NASCAR’s Nationwide Series and compete for the 2013 championship and would make his first start to team in the season finale at Homestead-Miami Speedway. In that race, Smith would be accompanied by the crew and the crew chief that gave him praise, Letarte and the No.88 team.

Starting the night from the tenth position, it was obvious from the start of the race that Smith would play a factor in the outcome of the race if everything went to plan.

Running inside the top-five for most of the night, Smith took the lead for the first time on lap 94 just before a caution came out.

Losing the lead through pit strategy,Smith would regain the lead but it wouldn’t come until under 50 laps to go in the race.

On the restart with 22 laps to go, Smith was part of the four-wide battle into turn one. A battle in which he came out with the lead.

The challenge wasn’t quite over, however, for Smith. He had one more restart with 15 laps remaining, but took command early after getting the jump when the green flag flew.

Leading the remainder of the race, Smith went on to win Saturday night’s Ford EcoBoost 300 at Homestead-Miami Speedway.

“That was a strong race car there, that’s what just happened,” said Smith in victory lane for the first time in his Nationwide Series career in his 103rd start.

Smith’s win comes in his first start in the Nationwide Series since July,2007 and it’s the first win for the JR Motorsports team since Jamie McMurray won at Atlanta Motor Speedway in September,2010.

“Regan drove a great race,” said Letarte. “I’m really proud of JR Motorsports. It’s been a long year and they’ve dug their heels in really, really deep all year long and it’s really, really good to get them to victory lane.”

If tonight is any indication of things to come in 2013, watch out for the No.5 team with Smith behind the wheel.