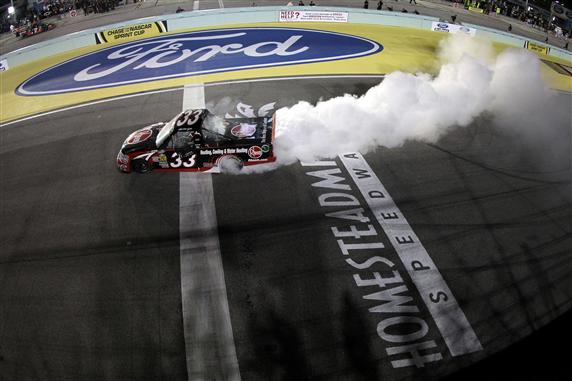 It’s hard to believe that Kyle Busch entered Friday’s race at Homestead-Miami Speedway without a win to his name in the Truck Series in 2012. But, that was the case.

After being parked in the truck race at Texas Motor Speedway last November, seeing Busch race in the Truck Series looked to be a thing of the past when he hired Jason Leffler to pilot his No.18 truck in 2012.

But, when the Leffler deal didn’t play out like either had hoped, it opened the door for Busch to return to the series at Atlanta.

In that race, Busch dominated and held the lead in the closing stages. But as the handling and the tires went away on his truck, he was passed for the lead by Ty Dillon who went on to take his first win.

Many thought that would be the last we saw of Busch in a truck for 2012, but he returned at Texas Motor Speedway and scored a top-five finish. But it still wasn’t a win, and Busch wanted a win. That’s why he entered himself in the season finale at Homstead-Miami Speedway.

Running in the top-five for most of the race, Busch took the lead on a restart with 26 laps to go after another Kyle (Larson) lead most of the middle portion of the race.

Battling for the lead with Matt Crafton, their battle was temporarily put on hold when a caution came out with 10 laps to go after Max Gresham’s truck pounded the wall, setting up restart with five laps to go.

Getting a jump on the restart, Busch sailed off with the lead, but the real action was behind him.

Trying to win his first championship in NASCAR, Ty Dillon tried to race his way into the points lead by climbing up to the second position while James Buescher struggled to reach the top-10. But his title hopes were dashed when he and Larson went side-by-side into turn three as the two made contact and crashed into the wall, collecting Ryan Blaney in the process.

The wreck brought out the red flag, setting up a green-white-checkered finish to end the 2012 Truck Series season where Busch would lineup alongside Cale Gale

But on the restart, it all fell apart for Busch despite getting another great jump.

On the white flag lap, the No.33 truck of Gale came into the picture for seemingly the first time all night long, racing side-by-side with Busch down the backstretch.

Entering the third and fourth turn, Busch and Gale remained side-by-side and stayed that way all the way to the start/finish line as the two rubbed fenders battling for the win.

Looking to get his first career win, Gale edged out Busch coming to the line to win Friday night’s Ford EcoBoost 200 at Homestead-Miami Speedway by 0.014 seconds.

“I can tell you right now—coming off of (turn) four—that’s not my driving style. But, it’s my first chance to taste NASCAR victory,” said an exuberant Gale in victory lane.

“I know it’s Kyle Busch, but I don’t get opportunities like this very often. I had a great opportunity this year, don’t know what’s in store for me next year, but I had to take it while I could.”

Gale’s win moves him into twelfth in the series points, and delivers team owner Eddie Sharp his second victory of the 2012 season, putting both of his trucks in victory lane.

Both of Sharp’s drivers (Gale and Lofton) contributed to the  record-setting season by the Truck Series in 2012 by showing nine first-time winners over the course of the season.

“We’ve been good at times and should have had better results,” said Gale when reflecting back on his 2012 season. “Honestly, short tracks are my cup of tea. I had never seen this place before today.

“I told them (crew) about five laps into it that I liked this place, it reminds me of old Birmingham Fairgrounds track. Run right up against the wall and just a lot of fun.”

The win on Friday night made Gale the sixteenth different winner in 22 Truck Series races in the 2012 season, capping off one of the most competitive seasons in the history of the series.