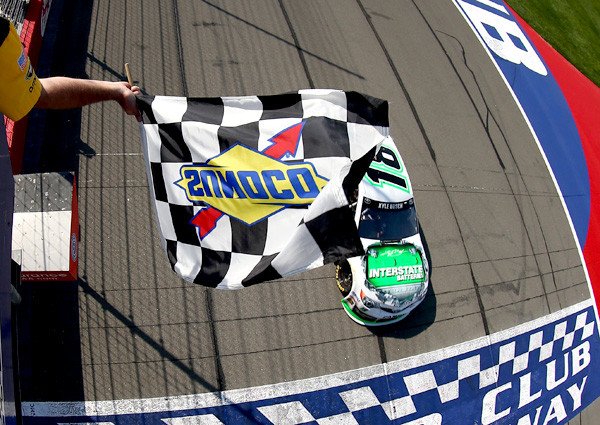 Thrilling finish, tempers flaring and punches being thrown after the race.

Typically, that’s not what you would expect from a race at the usually mild-mannered Auto Club Speedway.

But, that’s exactly what happened in the final laps of Sunday’s Auto Club 400.

After grabbing the lead on the final restart, Joey Logano was driving away and looked to have his first victory of the 2013 season all wrapped up.

With the laps winding down the No.11 of Denny Hamlin, the same driver Logano had a dust-up with one week prior at Bristol Motor Speedway, was closing the gap with his fresher tires.

Getting closer and closer, Hamlin was putting the pressure on the 22-year-old Logano and it didn’t look as though he was going to budge for his former teammate.

He didn’t. Despite having water overflowing from the car, Logano continued to push his car to the limits around the slick, two-mile Auto Club Speedway looking for the win.

With two laps to go Hamlin’s push for the win intensified, drawing side-by-side with Logano as the two took the white flag.

Racing side-by-side into turn one, Hamlin used the momentum from the outside lane to edge ahead of Logano off the second corner. But Logano wasn’t going to give it up that easy.

Through their hard racing, Kyle Busch closed the gap on the two lead cars. Positioning himself in a prime place if Logano and Hamlin had another clash.

It happened. Logano drove his Ford deep into turn three, sliding up into Hamlin’s Toyota. That contact forced both cars to slow, and the No.18 of Busch drove  around them for the win.

“They forgot about me. I knew they were gunna,” said Busch in victory lane. “I figured the spotters would say that the 18’s comin’, stop messin’ around.

“When they both went to the bottom side of [turns] three and four, I’m like, ‘Oh man, this is golden. I got enough up here, I can make this happen.’ I put my foot to it and drove around the outside of them before they started crashing, maybe as they were crashing, I’m not sure.

“Feels so good to finally win.”

The win was the second for Busch at Auto Club Speedway, his second of the weekend and first of the 2013 season.

“Jeez, it’s so fun to come out here and perform like this, but to finally win it; It’s been three years in the making. We finished third a couple years ago, second last year, first now this year,” said Busch.

It also marks the first time Joe Gibbs Racing has won at Auto Club Speedway in the Sprint Cup Series, the same track they won their ninth-consectiuve race at in the Nationwide Series on Saturday.

After battling for the win, Logano and Hamlin would drop to finishing third and twenty-fifth respectively.

“Probably shouldn’t have done what he did last week,” said Logano about the incident with Hamlin on the final lap. “That’s what he gets.”

Hamlin was air lifted to a local area hospital for precautionary reasons. He was reported as being awake and alert in the infield care center at Auto Club Speedway before being air lifted.

The Sprint Cup Series takes a week off, but resumes action in two weeks at the Martinsville Speedway where Dale Earnhardt Jr. will enter the race weekend as the points leader.