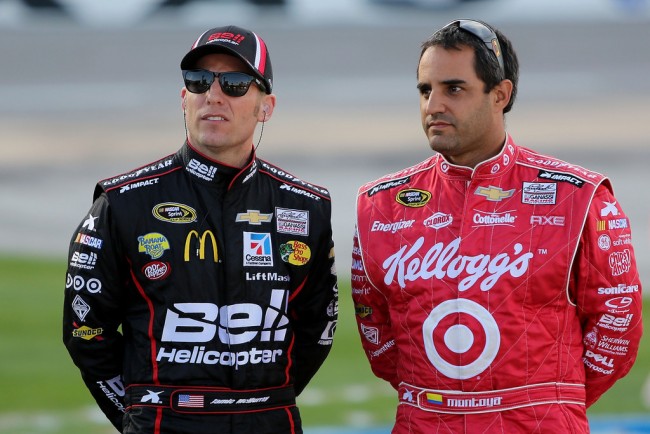 It’s taken the better part of the last three seasons, but it appears as though Earnhardt Ganassi Racing (EGR) has found some of their magic from the past.

The team that won both the Daytona 500 and Brickyard 400 in 2010 with Jamie McMurray hasn’t produced in recent years with either McMurray or Juan Pablo Montoya.

Montoya’s back-to-back poles at Pocono and Watkins Glen in August  and McMurray’s strong effort in the October Talladega race before crashing out were the loan bright-spots for the team last season.

However, throughout the season, both McMurray and Montoya said the team was improving but it was a slow – but steady – process.

Despite the team saying progress was being made within the organization, the results on the track never indicated the effort going into the team behind the scenes.

Prior to the start of the 2013 season, which began the introduction of NASCAR’s Generation-six race car, EGR made a change in engine suppliers; switching from long-time supplier Earnhardt Childress Racing Engines (ECR) to Hendrick.

Since the recent changes from the cars to the engines, EGR’s results have drastically improved.

McMurray has been up front during many of the races thus far in 2013, and won the Sprint Showdown exhibition race at Charlotte Motor Speedway in May.

Montoya, who is still looking for his first oval track victory, has been the closer of the two drivers to achieving the team’s first win since 2010.

At Richmond, Montoya had one of the fastest cars throughout the race but never had the track position to show what kind of car he had.

With less than 100 laps to go, the No.42 Chevrolet took the lead and looked as though it was going to be the night he had been waiting for since his first NASCAR race on an oval.

A late-race caution for Brian Vickers forced the No.42 team to make the trip to pit road, effectively ending their chances at a win.

Montoya would still post a top-five finish, but it wasn’t a win.

But maybe the closest EGR has been to victory was this past Sunday’s race at Dover.

Taking two-tires on the final pit stop of the race, Montoya was lined up next to race leader Jimmie Johnson.

Johnson, who jumped the restart, was black flagged by NASCAR which handed the lead off to Montoya who led for the first time in the 400-lap race with under 20 laps to go.

“That win is coming,” Montoya said after his second-place finish Sunday at Dover where he was passed by race-winner Tony Stewart with three laps to go. “It’s just good to be running this good every week.”

The elusive first victory of the season could be coming up for the EGR team.

With both Pocono and Sonoma Raceway – tracks that both McMurray and Montoya run well at – coming up in the month of June, the team that looked lost for the better part of two seasons could find themselves in victory lane.

3 thoughts on “Earnhardt Ganassi Racing has finally turned the corner”