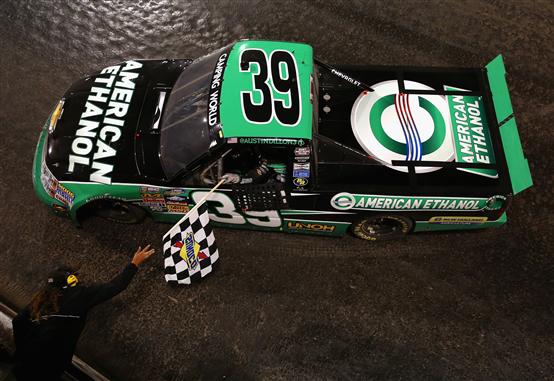 When the decision came down to take the trucks to the dirt track, there were immediate discussions as to who would come out on top and whether a guy who runs dirt regularly would win.

In the end, it was a past series champion, current Nationwide Series regular and a guy who has his own dirt team – Austin Dillon – taking the win.

“It’s amazing,” Dillon said. “I love this dirt racing. It’s so much fun. I want to thank Tony Stewart and NASCAR for coming here and my grandpa and American Ethenol for the opportunity. This is real racing right here – that’s all I have to say. Thanks to everybody back at RCR and ECR Engines.”

Dillon would get by Kyle Larson on lap 97 after Larson got hung up behind the lap truck of German Quiroga.

“We started 19th,” Dillon continued. “Had to come from a long way and got some of them on the bottom. We had good drive off and were able to keep picking them off.”

Larson, who led the majority of the middle of the race after taking the lead from Timothy Peters on lap 39, looked to have the strongest truck throughout the night. However, he came up short as he finished second behind Dillon.

“We had the best truck, for sure,” Larson said. “Our Klorex Chevy was the best truck, I thought. I just got excited in lap traffic and got into the back of a truck and Austin got by me. I got by Ryan there before the caution, but guess I wasn’t by before the scoring loop. Then I kept screwing my restarts and used Ryan up racing there. It would’ve been nice to win here, but he ran a perfect race.”

Ryan Newman would finish third after making his way to the front of the field during the second half of the event.

“My truck was really good on the long runs and I just didn’t have it at the end,” Newman said. “I want Kyle’s mailing address so I can send him the left side of the truck.”

Joey Coulter ran around the 10th place spot for most of the event, though found himself clawing his way through the field in the second half to finish fourth.

“It’s the first race of many,” Coulter said. “There was a lot of bumpin and rubbin because that’s what we needed to do. It was done to me early on so I just waited a little later to start dishin’ it out. Solid job to Tony Stewart on putting this on. it was a solid points race for us.”

“It was a great night,” Gaughan said. “This is a great team effort from RCR. We grabbed guys from the shop that had dirt experience and moved them around. If the fans had fun watching, then that’s great because that was a lot of fun.”

There was only one incident during the course of the event as with 38 laps to go, dirt racer Jared Landers would spin, making contact with Johnny Sauter and Ty Dillon. Ty Dillon would be able to continue, but Sauter was forced to pit road with a broken radiator.