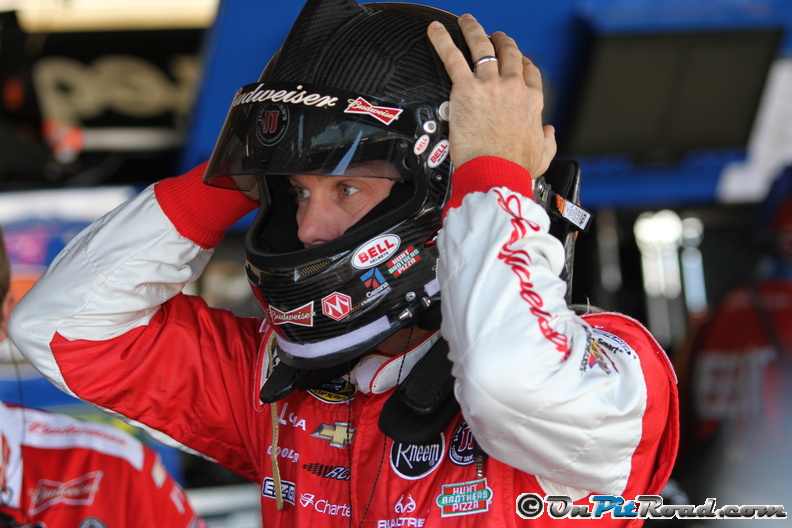 To say New Hampshire went like Kevin Harvick wanted, that’d be negative. After getting his Chase off to a good start at Chicagoland, Harvick went to New Hampshire and finished 20th. As a result, he sits sixth in the points.

The good news is the series is headed to Dover this weekend, a track that Harvick has done well at in the past. In his last five starts at the Monster Mile, he has four top 10s.

“It’s been a good racetrack for us as we’ve gone to Dover the last few years, so obviously we’re looking forward to going back, and hopefully matching that success this weekend,” he commented. “We didn’t run so well at Loudon last weekend, so we need a good weekend going to Dover this week.”

With the Chase for the Championship, being on, the added pressure is there and considering a bad run, you’d think Harvick would be extra anxious about getting things turned around. However, Harvick says when in the Chase, you just have to go out and drive your car as it will go – just keep doing what you did the previous weeks.

“A lot of people think that we change our strategy, but our strategy is to try to win every week, and obviously you can’t do that every week, and you have to try to pull the best finish that you can from that particular weekend,” he explained. “Really that’s our strategy is to go out and try to perform the best that you can, and if you’re having a good day, capitalize on it.  If you’re having a bad day, try to figure out how to create a decent finish for it and gain maximum points.  It’s really the same strategy, Chase or no Chase.”

Harvick added that he hasn’t even looked at the points or paid attention to them, but rather is focused on doing what he can each week.

“Where you fall is where you fall, and that’s the cards that you were dealt,” he added. “At one point we strung together nine weeks in a row there with top 10 finishes and some wins, and I think that’s what you need to do anyway to have a chance at winning the championship.”

He adds that it’ll be hard to gain points on Matt Kenseth and the other front runners if they keep doing what they’re doing. So far this year, Kenseth is two-for-two, having won both races.

Last year, it was announced that Kevin Harvick would move to Stewart-Haas Racing in 2014, but compete with Richard Childress Racing this season. Transitioning through the period has been interesting for the driver of the No. 29 Budweiser Chevrolet, especially on the sponsorship side.

“I couldn’t really be involved in any of the sponsorship stuff that was going on so that I could focus on the racing at hand this year,” he said. “It’s been an interesting time for me because in the past we have been so involved in the things that are going on.  But to see Budweiser and Jimmy John’s and to have Outback come on board next year is pretty satisfying for me, and just for the fact that the sponsors have enough value in the things that we’ve done on and off the racetrack from the past to carry that forward, and to be able to represent the brands Budweiser and Jimmy John’s that we’ve represented in the past is obviously something that I’m used to and I’ll be able to see familiar faces and brands going forward as I go into my new position at Stewart-Haas Racing.”

Harvick added that he’s excited about the sponsor line-up and going to Stewart-Haas Racing, while interesting getting to know those guys.

However, right now, his focus in purely on winning races for RCR before leaving at season’s end. He is not listening to what everybody says about his chances or what he should do, but rather focusing on what he’s done all year so far.