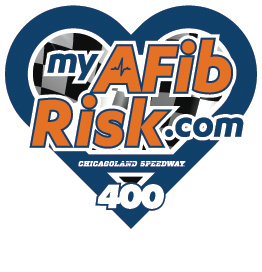 “I tested at Chicago last year, so I do have some laps there. It’s rough. Turns 3 and 4 are just one really large bump. So, the big thing was getting through there without the bump upsetting the car too much. Other than that, it’s a cool racetrack, and I look forward to getting more laps there in our CSX ‘Play It Safe’ Ford. We just want to come down the homestretch strong in these last 10 races and bring home some good finishes.”

JUST THE FACTS: Sunday’s race will be Moffitt’s first race appearance at Chicagoland Speedway … CSX returns as primary sponsor of the No. 34 Ford for the event, promoting the “Play It Safe” railroad safety initiative.

“Chicagoland is pretty cool. There’s nothing really quite like it with how round it is. Everywhere else we go has a distinct straightaway, where Chicago never stops turning. I like the banking and the way the track races. It’s got a lot of different grooves. There’s a huge bump getting into Turn 1 and some huge bumps through Turns 3 and 4. It’s just got a lot of different stuff that you deal with. You can’t just keep the cars down and dirty. You’ve got to get them up off the track a little bit to get over the bumps. That’s one of the mile-and-a-halfs that I really look forward to.”

JUST THE FACTS: Whitt has three Sprint Cup career starts at Chicagoland Speedway … His best finish at the 1.5-mile oval is 30th (2014) … MDS Transport returns as primary sponsor of the No. 35 Ford.

“It’s going to be a great weekend. We’re excited about our trip to Lurie Children’s, one of the Children’s Miracle Network Hospitals, and getting to visit with the kids and seeing them smile a little bit. And we’ve got a little boy named Jack who will be coming to the track. He has an incredible story, a miraculous story actually, overcoming what should’ve been a fatal disease as a baby. The strength and courage that he and his family have are inspiring and I can’t wait to meet him. He’ll have his own driver’s suit, and he’ll get to go to the drivers’ meeting with me and spend the day with me.

“I’m really proud of what Love’s Travel Stops does to help raise money for the Children’s Miracle Network Hospitals. Those donations go a long way, and I get to see that when I visit the hospital and when I see kids like Jack. What they do for those kids is amazing.”

JUST THE FACTS:  Gilliland has eight Sprint Cup starts at Chicagoland Speedway … His best finish at the 1.5-mile oval is 16th (2007) … Love’s Travel Stops returns to the No. 38 team as primary sponsor for the race weekend, highlighting its annual fundraiser for Children’s Miracle Network Hopsitals … The No. 38 Ford Fusion and Gilliland’s helmet will both feature a design by seven-year-old Jack Benjamin, a Children’s Miracle Network Hospitals miracle child … Jack will spend the day as the team’s special guest and will wear a Love’s firesuit like Gilliland’s.

About Front Row Motorsports
Front Row Motorsports is a race-winning organization competing in NASCAR’s premier Sprint Cup Series, fielding the No. 34, the No. 35 and the No. 38 Fords. The team is owned by Bob Jenkins and is headquartered just outside of Charlotte, N.C. FRM was named to INC Magazine’s “INC 5000” list in 2012, recognizing the 5,000 fastest-growing private companies in the U.S. The team’s partnership base is representative of more than $200 billion of the U.S. economy and includes organizations such as Ford Motor Company, Love’s Travel Stops, Colgate-Palmolive, CSX Transportation, Taco Bell and Long John Silver’s. Visit teamfrm.com.