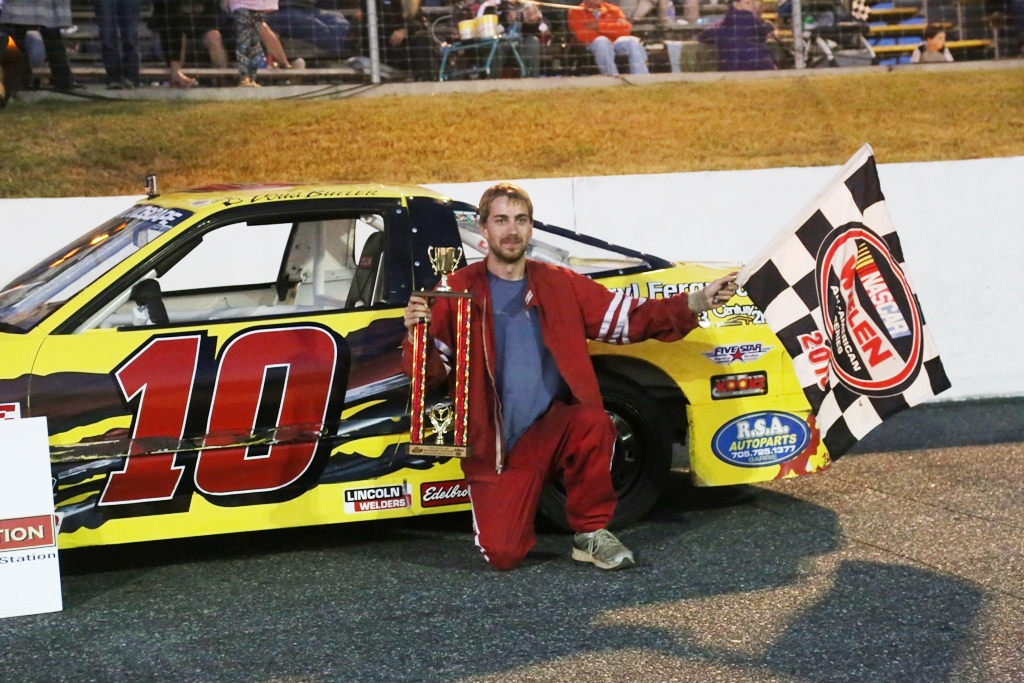 Back in the day – 2009 and 2010 – Sunset Speedway Mini Stock competition had a couple of names that stood out to anybody watching. One of those names was Doug Butler. He was able to win the championship both of those seasons with multiple trips to victory lane. Though with the success behind him, he went on to try other tracks and see if he could repeat the success there. He was able to do so last season at Barrie Speedway, winning their track championship. Though also at season’s end, the speedway would close.

Butler would return to Sunset Speedway this season and found his way back to the top, scoring the 2015 Graham Landscape Mini Stock Championship.

He didn’t win the most features of his competitors, but he was simply able to avoid trouble. While other competitors suffered a couple poor finishes whether due to mechanical issues, flat tires or wrecks, Butler was clean as a whistle each week. Starting from May to the season finale last weekend, Butler finished each of the features in the top-six, including a feature victory on August 1.

Notably, he hasn’t finished outside of the top-five since the sixth place finish on the second night of competition in May. It seemed each week he got stronger, and that was something was reflected when OnPitRoad.com spoke with Butler last month.

“Coming here, I was a little discouraged at the start,” he admitted. “I didn’t think I had a hope. Everybody had just picked it up since I left. I came, worked on the car, got used to the track. About mid-season, it just started working for me. Everything started clicking and we just went from there.”

Though while Butler got better, the competition also continued looking for places to improve, with drivers like Jordan Howse, Eric Yorke and Andy Kamrath getting quicker with each passing week. With six different drivers visiting victory lane this season, Butler says the biggest difference from 2009 to now is the amount of competition.

“People are spending money and I’ve tried to keep up and it’s probably five times harder than when I did win the championship,” he stated. “But hey, just bring on the competition – I’m always welcome to it.”

For this season, Butler welcomed that competition and topped them all with master consistency.