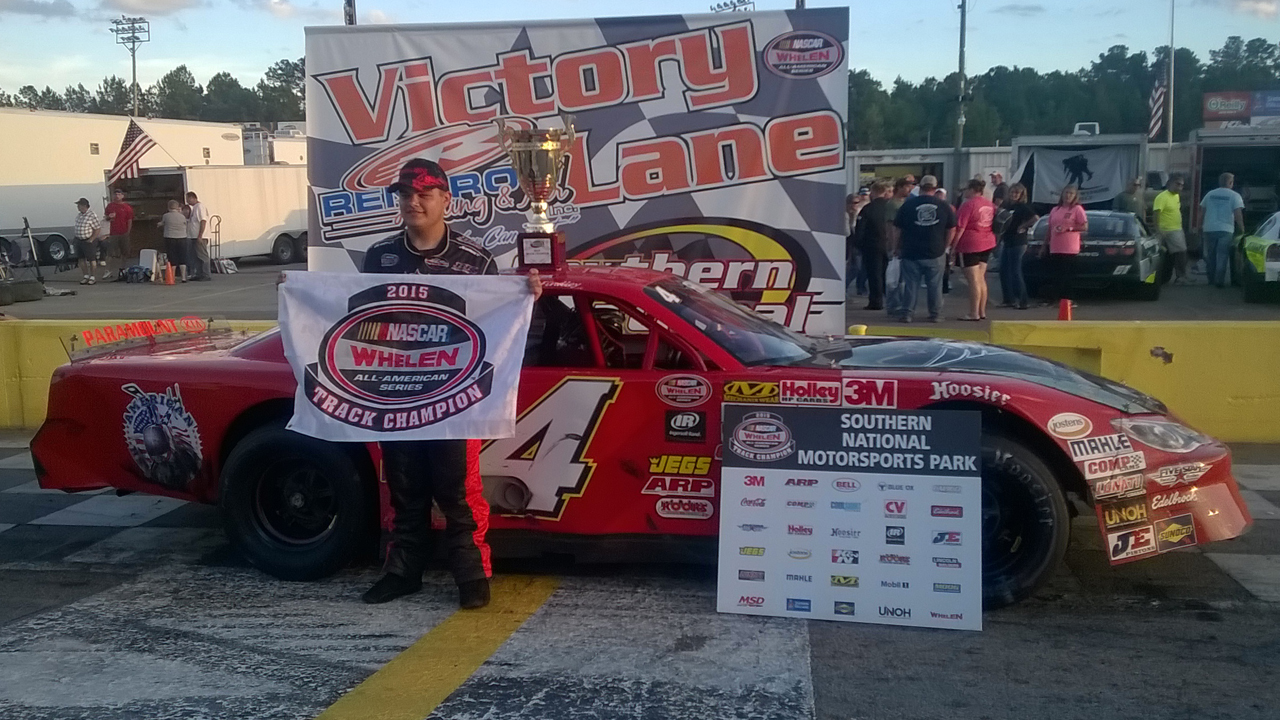 Tied For 11th All-Time For Single-Season Wins With 28

The Semora, North Carolina, driver added three more wins over the weekend to his ledger, pushing his total to 28 victories and all but assuring himself the top honor in North American short-track racing.

Which may be the understatement of the year.

Pulliam finished 13th in the second Late Model race on July 11 at Virginia’s South Boston Speedway, when he broke a track bar mount while leading the race. Since that race, the 27-year-old driver has 15 wins, four runner-up finishes, a third, a fourth and a fifth.

Thomas Tillison Jr. looked to keep pace Saturday night, when he won from the 10th starting spot in the dirt Late Model Division at Oklahoma’s Salina Highbanks Speedway. That gave him a maximum 41 points for the night, and pushed his total to 681. The 41-year-old from Wellston, Oklahoma, also ran second on Friday at Flint Creek in West Siloam, Oklahoma.

Tillison has 15 wins, 24 top fives and 24 top 10s in 28 starts. He is also leading the Jostens Rookie of the Year standings as a first-year Division I license holder.

He would need to win four times in the final weekend to pass Pulliam. Three wins from 10th or worse starting spot would give Tillison 702 points and Pulliam would win the tiebreaker by virtue of more overall wins.

NASCAR Whelen All-American Series Division I drivers are ranked by their best 18 NASCAR points finishes in series-sanctioned events. Drivers receive two points for every car they finish ahead of – up to 18 cars – and three points for a win, with an additional two points available if the driver starts 10th or lower.

Taylor Holdaway completed his first NASCAR championship season by wrapping up the asphalt Late Model title at Ontario’s Sunset Speedway with a win in the 75-lap finale. That also gave the 24 year-old from Orillia, Ontario, his 12th win of the year and pushed him back past New York’s Jimmy Zacharias for third-place in the national standings.

Holdaway has 676 points, leading Zacharias by six and Keith Rocco by 16 for the final podium spot at the NASCAR Whelen All-American Series Awards in December.

Zacharias, who already clinched the asphalt Modified track at New York’s Chemung Speedrome, finished 15th and ninth in twin features Saturday at New London-Waterford Speedbowl in Connecticut. Rocco had a second and a fourth at New London-Waterford, and a fifth at Stafford Motor Speedway, the other Nutmeg State oval in action last week.

Rocco would need to win twice from 10th or back to pass Holdaway on the final weekend, while Zacharias can do it with one win.

The highest finishing driver from Canada in the NASCAR Whelen All-American Series was Steve Robblee, who was sixth in 2009 while racing at Ontario’s Delaware Speedway. Ron Sheriden was eighth that year and 13th in 2010 also racing at Ontario.

Like Flint Creek, Sunset is in its first season as a NASCAR Whelen All-American Series track.

For Pulliam, he’s been through this before. This is the fifth straight season he will finish in the top three in the NASCAR Whelen All-American Series, and he won the national championship in 2012 and ’13.

When Southern National was rained out Saturday and pushed their season finale to Sunday, Pulliam knew it was possible to get an extra pair of races in. The team set up the car between practices Saturday at Motor Mile. And then after they found out Tillison picked up another win, they made the decision to head south.

After clearing post-race technical inspection Saturday night at Motor Mile, Pulliam said they got to bed about 1:30 a.m., and then were up about 5 a.m. to make it to Southern National when gates opened at 9:30 a.m. Sunday morning.

“We hadn’t been there all year, and they’re running a different engine package than we do,” said Pulliam. “I was really nervous it wasn’t going to work out for us. But we were quick right off the trailer.”

Southern National was the fifth different track Pulliam has won at this year. He also picked up his first career wins at Kingsport (Tennessee) Speedway and Langley Speedway in Hampton, Virginia, in addition to collecting wins at Motor Mile, South Boston and Caraway Speedway in Sophia, North Carolina.

The top three in the national standings, as well as state and province champions, track champions, top finishers in the Div. II-V and special award winners, will be honored at the NASCAR Whelen All-American Series Awards on December 11.

Established in 1982, the NASCAR Whelen All-American Series is NASCAR’s national championship program for weekly short track auto racing. In all, 58 paved and dirt tracks throughout the United States and Canada participate.