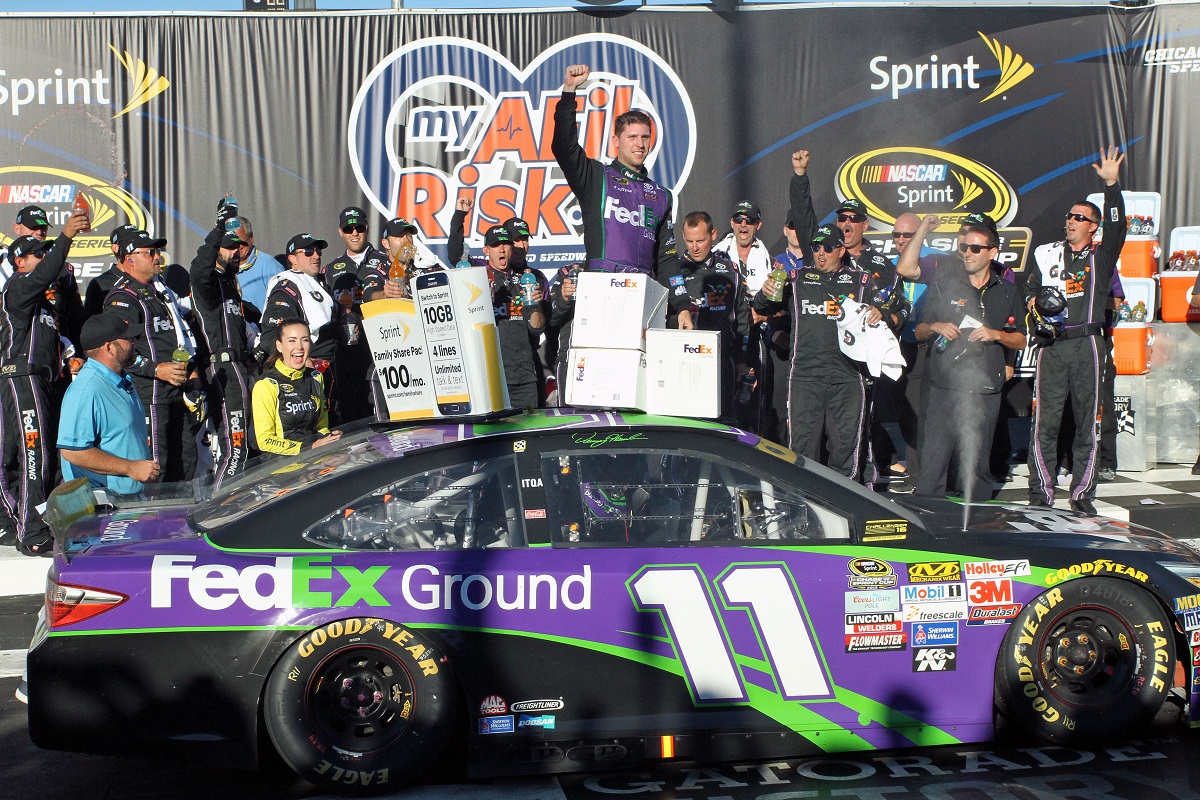 When Denny Hamlin spun on lap five, it seemed as though his day was over. However, a timely question mid-race to get him back on the lead lap and a strategy play at the end would result in the driver of the No. 11 FedEx Ground Toyota making it to victory lane.

Kurt Busch looked to be headed to victory lane, when the caution would fly with nine laps to go after Matt DiBenedetto got into the wall. Busch would choose to stay out on track, along with Gordon and Hamlin. Hamlin would then make it three-wide on the restart, taking the lead through turn one and two. He would then hold off a late race charge from teammate Carl Edwards to score the victory.

“We had a good car and played the right strategy at the end,” he commented. “Coming back from a lap down, we had a fast car. We were just running under green over and over and I never thought we’d get back on the lead lap. It’s a great way to start the Chase.”

Hamlin found himself starting deep in the field after struggling in the first practice on Friday. The field was set by those speeds as qualifying was rained out.

“We started at the back at the beginning,” he continued. “I knew there were going to be a lot of crazy cars. luckily, the caution came out and we were able to get back on the lead lap. It just paid off that we had a fast car.”

Edwards finished second, after fighting back from a speeding penalty on lap 54. Busch would end up third, saying that the caution made a big difference with how the race played out.

“Overall, proud of this team and everyone at SHR,” he commented. “This Chevy was fast, fast enough to win. The caution came out there at the end. I thought we had the right strategy but we didn’t. But this is a points day – its about getting point and going into the next weekend. We can’t just plow through New Hampshire and Dover, we got to race hard and lay it smart. But I felt like we had a winning car.”

“The last restart – some guys got loose and everything went to the top and everything choked up real bad,” Johnson commented. “It just held us up and we dropped back thru the field. I think we could’ve been top two or three.”

Kevin Harvick looked to have a strong enough car to win the race, leading laps early. However, he would fall out of the event after getting into the wall at lap 139 due to a flat left rear tire. Harvick’s tire went flat as a result of a rub, that was caused by contact with Johnson on the lap 135 restart. Logano would push Johnson on the restart, causing Johnson to go below the yellow line. Johnson would then move up the track to get back in line, getting into Harvick and pushing him up. Johnson went to talk to Harvick post-race, with Harvick giving him a shove. Harvick would try to get another shot in, though was held by a team member.

“I saw those guys coming on the apron and he must’ve came up,” he commented. “I just held my ground and he slammed up into me. The spotter said we were four-wide and I guess he figured that he’d come back up anywhere. We jut need to recover and score a win.”