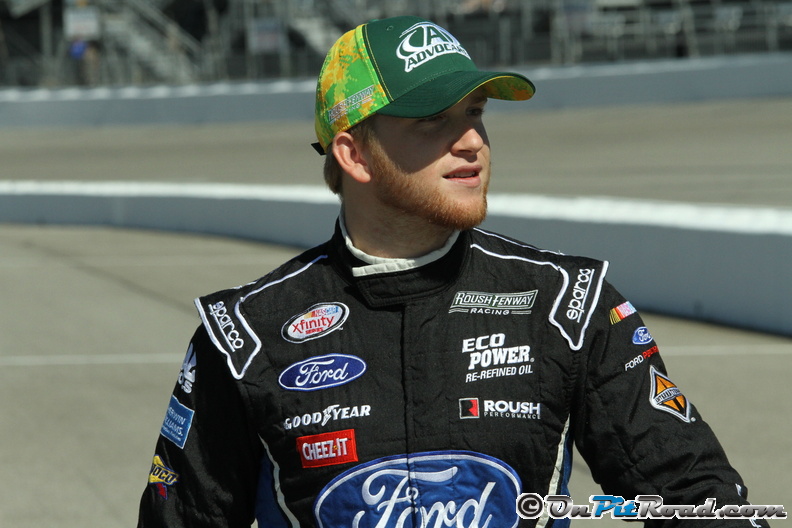 Entering this weekend’s XFINITY Series race at Kentucky Speedway, Chris Buescher currently holds a 25-point advantage over Ty Dillon as he searches for his first career championship. While everyone is focusing on the numbers, Buescher is focusing on one thing – scoring the victory this weekend.

“We have to go out here and win races and if we can do that, then we’re scoring more points than everyone else,” he commented. “That’s the approach that we’ve been taking in scoring the most points possible each time, and we’re going to not try and stray too far from it. We feel good about where we’re at – not comfortable as there’s a lot of racing left to go. This is just another step towards Homestead.”

Buescher has been in this position before, having battled for a championship in 2012 in the ARCA Racing Series. Buescher ended up on top at the end of the season, winning the title by 75 points over Frank Kimmel. He noted during his media availability on Friday that he is certainly using lessons learned from that experience to help him this year.

“It was a tough season and one that we realized just important consistency was,” he noted. “We were able to win several races, but we ran every race and every lap of competition. That was able to get us a lead lap finish every race, which meant we were in the top-10, top-15. We were able to get several wins We had a penalty after a win and lost some points so we had to bounce back the last quarter of the season. Just a lot of lessons that we’re able to apply now.”

Buescher did add that this time seems more stressful, simply because he’s racing in a higher series, and the competitors are closer in competition.

“With each position being one point and not five, it makes you realize just how close it is – especially the way the last 10 races have gone,” he continued. “The points keep moving around. We’ll gain some one week, loose some more the next – it’s been all over the place. Its not going to be easy to Homestead, but we have a lot of lessons from the last championship to apply to this one.”

In the road to the championship, this marks another one of those stand-alone races where the XFINITY Series is at a different track than the Sprint Cup Series, which results in no Sprint Cup Series drivers being in the field. Buescher says that doesn’t change his approach, though, as the cars and teams will be up at the front as usual, just with different drivers behind the wheel.

“It doesn’t change any aspect that the guys that are driving those cars aren’t Cup drivers as they’re still not running for points,” he explained. “They’re other guys that we need to race. It’s something kind of tore down a bit is that we’re running two races when we show up to the track. We’re racing the 3 (Dillon), the 9 (Chase Elliott) and the 7 (Regan Smith) – and then we’re racing everybody else for the overall race. From our internal race for the championship, those guys won’t make much of a difference Just from the race standpoint and trying to win it. We feel good about our chances every week, whether cup drivers or not. But obviously the experience that they bring makes it hard to outrun them.”

This week could present a challenge, though, as the driver of the No. 60 Mustang for Roush Fenway Racing admits that Kentucky hasn’t been one of his better tracks. With only one top-10 finish in three starts – a seventh last season, the statistics back-up his theory. With that in mind, Buescher says that he spent time with his teammates Darrell Wallace Jr. and Ryan Reed going into the weekend, utilizing some of their notes as both driver ran well in the spring; Wallace finished seventh with Reed finishing 14th.

“We’ve shared a lot of notes and been able to over a lot of things to try and make our mustang better this time around,” he commented. “Feel pretty comfortable about it.”

Buescher added that he feels comfortable as his team has been able to capitalize on tracks where grip is a premium due to the asphalt being rough and aged, which Kentucky fits under that category.

“We get a car drives well in practice and usually lends us to a really good race,” he shared. “e’re more looking for drivability than the off the truck speed knowing that has translated more better for us this year as we look back.”