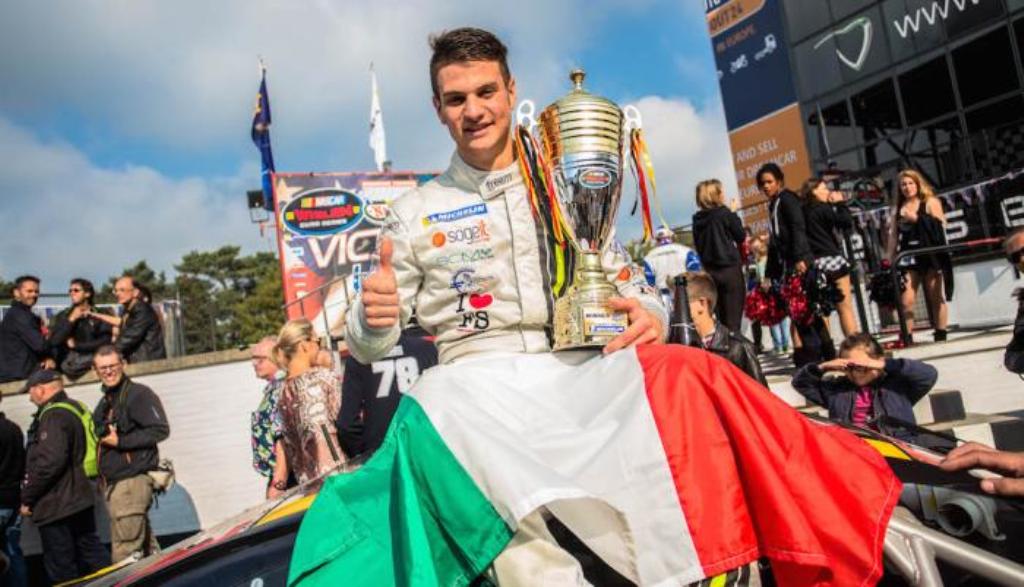 At the end of a perfect weekend that saw him put up an impressive performance and win both races leading from flag to flag, Gianmarco Ercoli (#9 Double T by MRT Nocentini Chevrolet Camaro) took the ELITE 2 Division title in the American Festival Circuit Zolder NASCAR Finals.

“We have been perfect this weekend, we won both races and I’m so happy I’m the champion,” said Ercoli. “I have to thank MRT by Nocentini and all the guys who worked hard to make this possible. I had only one chance coming here in Belgium: Win the races to win the title. It was an amazing weekend.”

With four drivers separated by just eight points, the ELITE 2 Final 2 turned out to be a three-way battle between Ercoli, Salvador Tineo Arroyo (#51 CAAL Racing Toyota Camry) and Stienes Longin (#11 PK Carsport Chevrolet SS). The three drivers sat an outstanding pace, posting fastest lap after fastest lap, until Tineo Arroyo had to stop with a problem on his car on lap 10.

Longin kept pushing hard but hadn’t enough time to fill  the 0.9 seconds gap on Ercoli before the checkered flag and crossed the line in second – winning the Rookie Cup classification for the race and for the season – in front of Race and Win Pole Award winner Florian Renauer (#5 Dexwet Renauer Team Ford Mustang), edging title contender Thomas Ferrando (#37 Knauf Racing Team Ford Mustang) and Philipp Lietz (#67 GDL Racing Ford Mustang) who ended up second in the ELITE 2 general classification, ahead of Ferrando.

Carole Perrin dominated the Lady Cup classification with her sixth position overall while Francesca Linossi (#99 GDL Racing Ford Mustang) brought home the final classification thanks to her ninth place behind Martin Doubek (#15 Dexwet Renauer Team Ford Mustang) and Eric De Doncker (#98 Insulco Motorsport 98 Ford Mustang) – the Belgian won the Legend Trophy both in the race and in the final standings.

Gianmarco Ercoli and the Trophies and Cups winners will be celebrated at Charlotte in December during the week of the NASCAR Night Of Champions Touring Series Awards.