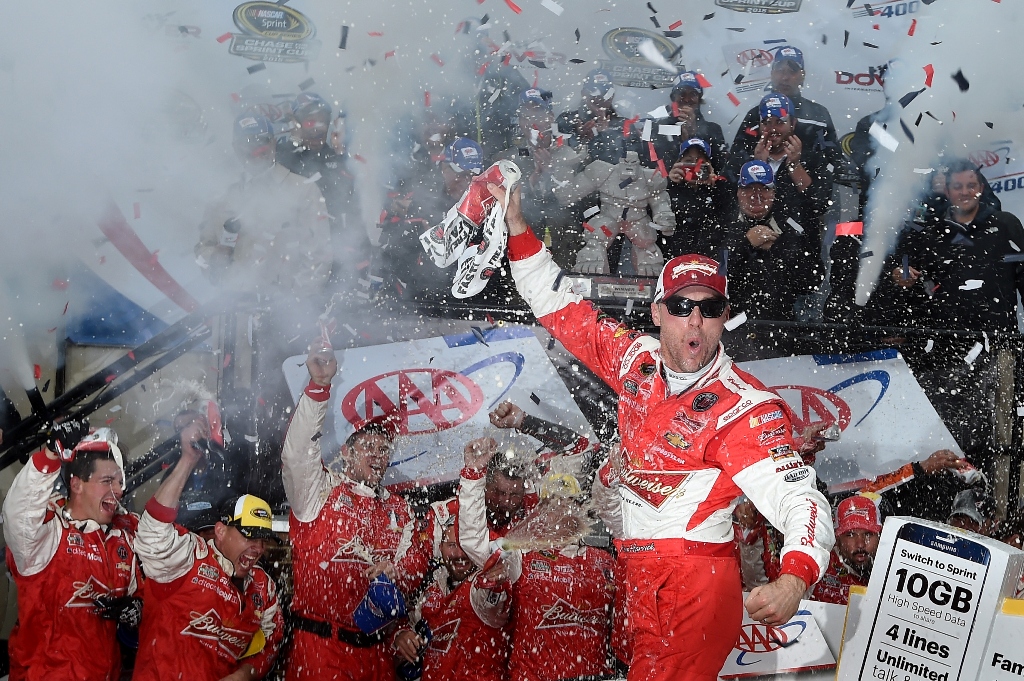 With a pair of bad runs to start off the 2015 Chase for the Championship, Kevin Harvick entered the third and final race of the first round virtually needing a win to move on to the second round to keep his championship hopes alive. He would do just that, dominating on Sunday afternoon in the AAA 400 at Dover International Speedway. For Harvick, it marks his second victory of the 2015 season.

“I’m just so proud of everybody from Stewart-Haas Racing to do what we’ve done the last three weeks,” he commented. “Obviously we weren’t in a great position coming in today and this is what these guys are made of – that’s what we’re all about.”

“It’s just one of those weekends where the car was really good – and there’s the I believe chant,” Harvick added. “I think when we look at everything that’s gone on the past couple of years, it’s been a lot of fun. The never quit attitude – its what Stewart told me going into Homestead that you’re never allowed to do.”

Kyle Busch would finish second to make the Chase virtue of two points over the cut-off mark in the standings. Dale Earnhardt Jr. would finish third to become the 12th and last driver to qualify for the Chase virtue of a tie-breaker with Jamie McMurray. The pair ended off the first round tied with Earnhardt finishing third and McMurray finishing fourth at Dover. Dover marked the highest finish for both drivers throughout the Chase, handing the advantage to Earnhardt to advance.

Earnhardt ran in the top-10 early, though dropped all the way back to 18th when he had to make a second trip down pit road for loose lug nuts at the second round of pit stops. Earnhardt then worked his way back to the front, running in the top-five as the laps started to wind down.

Then, it seemed the loose wheel problems would strike once again as he was feeling a loose wheel, however caught a break when a caution flew with 47 laps to go for Brett Moffitt getting into the wall. Both Earnhardt and McMurray headed down pit road, coming off beside of each other. McMurray was able to get the jump on the restart, getting ahead of Earnhardt and looked to be set to stay there when the caution flew with 29 laps to go for Landon Cassill blowing up. Earnhardt then made a move on the high-side, getting by both Logano and McMurray to move up to third. Though more importantly, ahead of McMurray.

“They just told me that I had to beat Jamie or the 18 (Busch) and we got around him on the last lap,” Earnhardt commented. “He was trying to get in there on the bottom and they rode around there slowly. So I went in there as once you get out there, you can’t really make a lot of passes. I jumped in there and got by him, and was able to advance. We had a strong car today and had a pretty good car and finished third. I thought we had a strong car and deserved to be in the top-five.  We had some issues on pit road with some loose wheels but I think the guys are going to work on that and remedy that. We just need to put these races together and be solid and keep advancing.”

McMurray would finish the race in fourth, which marks a solid finish after getting the lucky dog at lap 192 when Jeb Burton hit the wall.

“Well, it was a great move that he made on the outside,” McMurray commented. “I was waving at Matt hoping that he’d let me in and he just did a really great job and got a run on me. I thought I’d be able to get back by him and I was just driving hard that last run and just couldn’t get back to him. It seemed that we were good on stickers but he was better at taking off on scuffs. It’s frustrating that we can’t get to the next round. Just needed one more point.”

Aric Almirola finished fourth, followed by Kasey Kahne, Matt Kenseth, Ricky Stenhouse Jr., Kyle Larson and Joey Logano. Logano will advance to the next round of the Chase as well, along with Kenseth, who won last weekend. Martin Truex Jr. and Jeff Gordon finished 11th and 12th to advance.

Paul Menard struggled throughout the race en route to being eliminated, while Clint Bowyer finished 14th but finds himself eliminated as a result of the penalty following Chicagoland. Jimmie Johnson was eliminated following the first round after breaking a rear axle seal at lap 104.