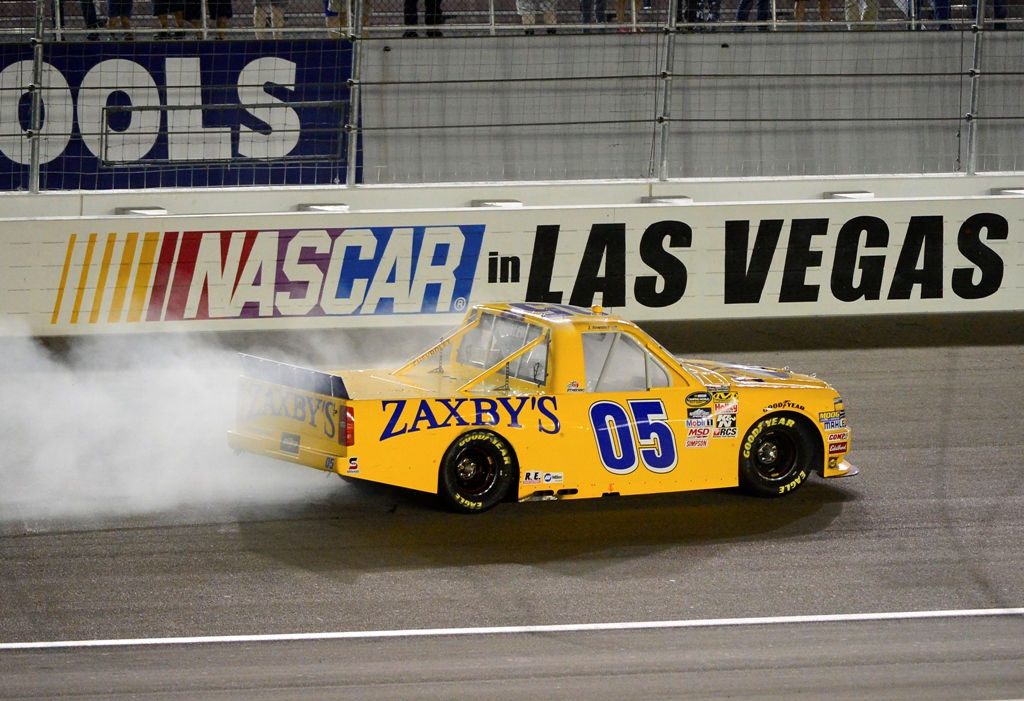 With the last round of pit stops taking place from lap 92 to 100, the question going into the final laps of the 146 lap event at Las Vegas Motor Speedway – who had enough fuel in the tank?

For John Wes Townley, bringing his lap times right down over the final five laps through coaching by his spotter to keep a considerable advantage over the next driver, would result in enough fuel being in the tank to get the checkered flag first. For the man known as ‘Chicken Man’, Saturday night’s Rhino Linings 350(k) marked his first career series victory.

“I would’ve ran myself outta gas if it wasn’t for Terry,” Townley commented post-race. “These guys did an awesome job with this thing. it’s been awesome this year.”

Townley ran up front throughout the whole race, battling side-by-side for the lead with Matt Crafton through the early going. Townley added in victory lane that he knew he had a good truck after seeing how it felt during the early laps.

“It was one of the first times this year that I’ve had the most security on the outside,” he continued. “It gave me confidence. We stayed up there all day. I took care of this thing and it took care of me.”

Red Horse Racing teammates Timothy Peters and Ben Kennedy finished second and third, followed by John Hunter Nemechek and Brandon Jones. Daniel Hemric finished sixth, followed by Tyler Reddick. Reddick had to fight back to the front after getting involved in an early wreck with his Brad Keselowski Racing teammate.

Reddick would get sideways through the middle of the corner on lap 15 and just about had it saved off of corner, when his teammate Austin Theriault would cross right into his path. The pair would make contact, sending Theriault straight up into a non-SAFER barrier outside wall. Theriault was transported to hospital for further observation – reported awake and alert. Meanwhile, for Reddick, it caused some left front fender damage to his truck. He made multiple trips down pit road, getting repairs, before working his way back through the field. Reddick now sits third in points, 16 points behind Erik Jones.

“My guys worked real hard on the truck,” he commented. “It was all tore up after that contact when I tore up a couple of good trucks. Just have to give all the props to my crew. They did all that work and to finish seventh in points ahead of those guys that we’re racing in points. I didn’t do my part – they did do their part and we got a good finish. it’s been shaky on my part lately but I know when I get it right that I have a team behind me.”

Matt Crafton, who leaves Las Vegas sitting second in points only four behind Jones, finished eighth after making a late-race pit stop with four laps to go for a splash of fuel. Crafton dominated the race, leading 69 laps.

“It was alright,” he said of his day. “We had a lot of speed during the day. the track didn’t quite free up as much as we thought it would. The third run we made a big swing at it and I was really happy at it with the end. I went to saving fuel and then they went to adding and said I wouldn’t make it. So we came down pit road and still ran out of fuel in turn one after the checkered. All in all, it was a solid day – could’ve been worse.”

Erik Jones finished right behind Crafton in ninth after running out of fuel going into turn one on the last lap. Jones started the race at the back of the field after changing the motor following qualifying.

“It’s full of ups and downs,” he said of his day. “Started at the back there. Fortunately we put a new motor before the race and it really woke our tundra up and we were able to get up to the top 15, and then the top five and then the top three there at the end. I trying to save as much fuel as I could at the end and I saw the 17 coming and tried to hustle it and unfortunately it ran out. It was a good fight and all we could do to get a good finish out of it. I think it’s the best outcome for us considering how the day started.”