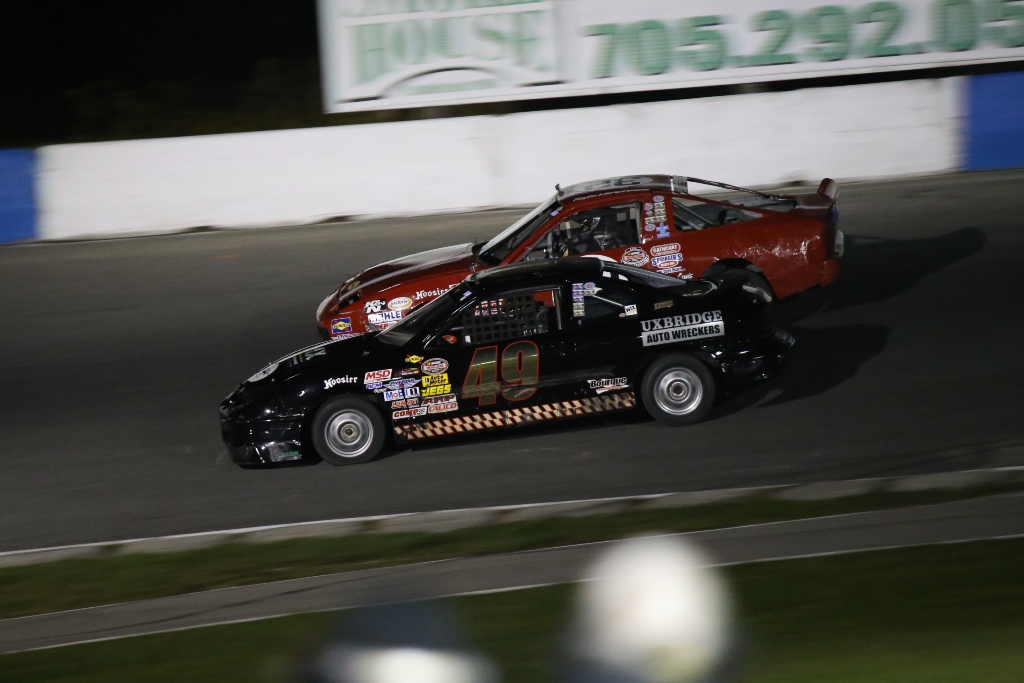 On Friday and Saturday, qualifying took place for the 23rd Annual Autumn Colours Classic with the heats for the Mini Stocks.

Flamboro Speedway regular Chad Corcoran won the first heat in perhaps his final Mini Stock start as he looks to move to Pro Late Model in 2016. The No. 10 finished second ahead of Brandon Hannah, Eric Yorke, Ken Townsend, Nick Clarke and Stefan Semeraro as Stefan Woyslaw failed to finish due to mechanical issues.

The third heat got messy as Bobby Tolton would take Ryan Babin and David Grant three-wide, resulting in contact that sent both Babin and Grant into the outside backstretch wall. Both drivers would be okay, but done for the night with damage. Peterborough regular James Townsend picked up the win ahead of Tolton, Craig Kamrath, John Carr, Danny Benedict, T.J. Edwards, Charlie Smith and Steve McNevin.

The fourth heat was a little messy, as well, with Robert Greenfield getting into the wall, followed by Josh Reed getting turned around in turn three and four virtue of contact. Peterborough regular Kevin Strutt picked up the win ahead of Terry Woodley, Chris Allard, Nolan Gould, Brad Lavalle, Gil Brooks, Mike Nelson and Greenfield.

The sixth heat would see Wakeling spin on lap four, with no caution flown. Peterborough regular Brandon Hannah picked up the win ahead of Yorke, Gibbons, Corcoran, Townsend, Clarke, Semeraro, Woyslaw and Wakeling.

The eighth heat got a little messy with Carr spinning Bobby Tolton, with Grant and Edwards both involved on lap two. James Townsend picked up the victory ahead of Benedict, Craig Kamrath, Carr, Tolton, Smith and McNevin.

The ninth heat also saw a caution as Gil Brooks would get into Allard off of turn four, resulting in Allard making heavy contact with the outside wall. He would be okay, but is done for the weekend with a heavily damaged car. Nolan Gould picked up the win ahead of Strutt, Lavoie, Woodley, McCann, Nelson, Brooks, Greenfield and Reed.

The 10th and final heat would see Tim Tolton, Lapcevich and Andrew Kamrath go three-wide, contact between Tolton and Lapcevich resulting in Tolton in the outside turn three wall. There would also be contact with Kamrath and Demers during the heat on the backstretch. Ryan Oosterholt picked up the win ahead of Kamrath, Scott Brooks and Demers.

The first b-main would see Watchorn and Tim Tolton tangle, resulting in Tolton spinning with Clarke spinning and Scott Brooks climbing the backstretch wall. Brooks and Tolton would be both done as a result, not making the main event.

Once the race got restarted, McCann would get sideways, with Beatty making contact on lap five. The caution would then fly two laps later for Wakeling spinning in turn four. Following the restart, McCann would tag Beatty, but there’d be no issues from the contact.

Nick Clarke scored the victory ahead of Watchorn, Demers and Gil Brooks to transfer to the main event. McNevin, Beatty, Greenfield, Bos and McCann would fail to qualify.

The second b-main would see Josh Inglis hit the turn three wall on lap three. Then on the last lap coming off of the fourth turn, Smith would turn Nagy out of the third spot. Casey Cavanah picked up the win ahead of Nelson, McLean and Semeraro to transfer. Edwards, Phinnemore, Robinson Jr., Woyslaw, Nagy and Smith would fail to qualify.

Following the event, Cavanah announced that he is taking the money to start the event, but not running the full feature on Sunday. As a result, Edwards will moves up to be part of the big show.

The Mini Stocks will return to the track on Sunday for their feature.