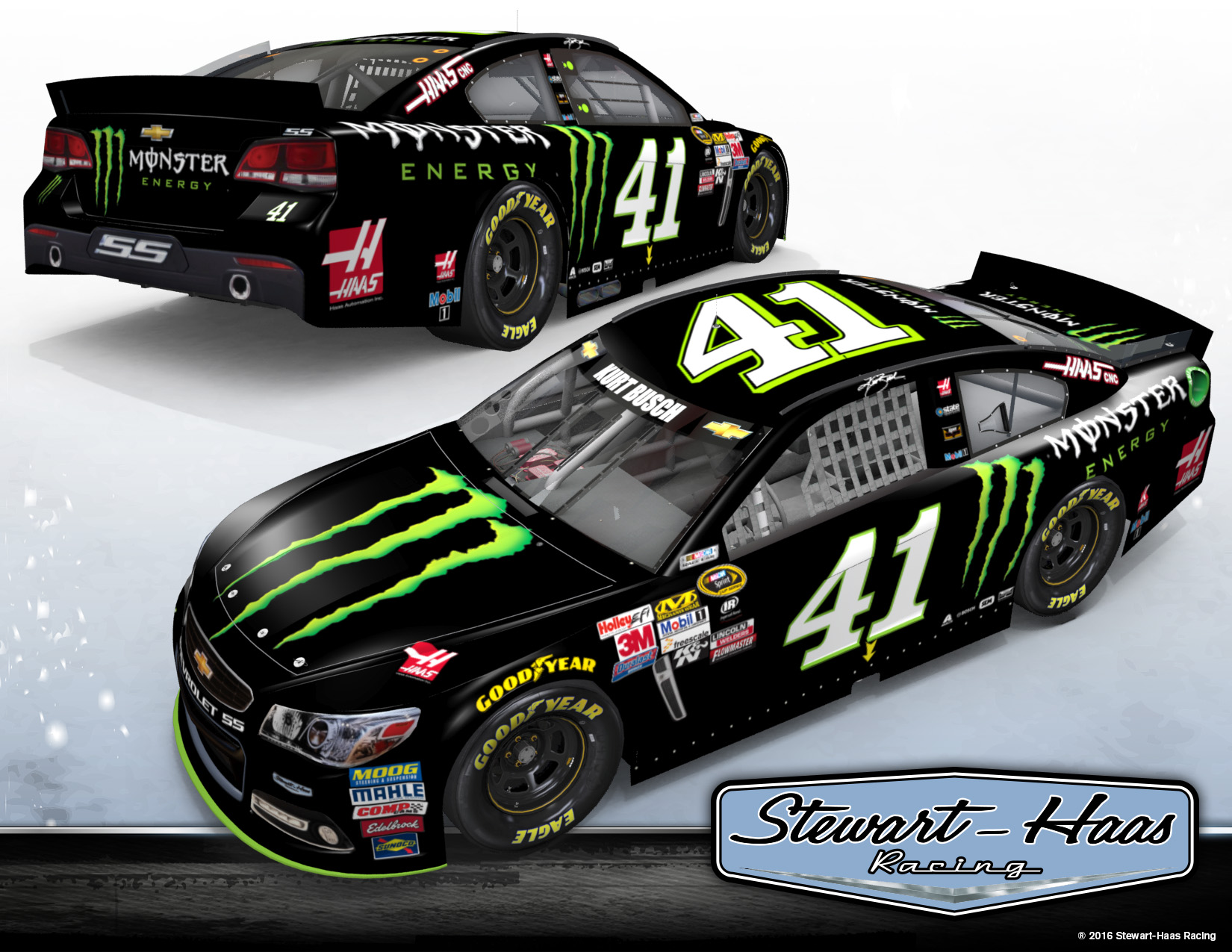 Monster Energy To Serve as Co-Primary Sponsor with Haas Automation of No. 41 Team

KANNAPOLIS, N.C. – Monster Energy is moving to the NASCAR Sprint Cup Series while Kurt Busch is staying at Stewart-Haas Racing (SHR). The energy drink manufacturer has teamed with Busch in a multiyear agreement that will see Monster Energy co-sponsor him and the No. 41 Chevrolet SS with Haas Automation, the largest CNC machine tool builder in North America.

Busch, the 2004 Sprint Cup champion and owner of 27 career victories, will debut this new sponsorship during the Oct. 30-Nov. 1 Sprint Cup race weekend at Martinsville (Va.) Speedway. The No. 41 Monster Energy/Haas Automation Chevrolet SS will then become a fixture beginning with the 2016 season, whereupon Monster Energy will be the alpha sponsor (hood) for 17 races and the bravo sponsor (quarter panel) for 18 races with one full primary race sponsorship.

“I’m very happy to be back with Stewart-Haas Racing and proud to take Monster Energy to the Sprint Cup Series,” said Busch, who has won three races and three poles since joining SHR in 2014. “This is exactly where I want to be and I have two partners who want to win as much as I do.”

Monster Energy passes on traditional forms of advertising and instead earns significant brand exposure through its roster of extreme athletes. Busch, renown for a tenacious driving style that has earned him multiple wins in a Sprint Cup career spanning more than 15 years, fits the bill for Monster Energy.

“Kurt Busch has been a member of the Monster Energy team since 2012 and we’re very happy to take his involvement with us to a whole new level,” said Mitch Covington, vice president of sports marketing, Monster Energy. “The NASCAR Sprint Cup Series is the premiere form of stock-car racing in North America and it’s exactly where we want to be. Kurt and everyone at Stewart-Haas Racing are racers. They walk the walk, just like Monster Energy.”

SHR is the championship-winning Sprint Cup team co-owned by Tony Stewart and Gene Haas. Stewart is a three-time Sprint Cup champion with 48 career victories. Haas is the founder of Haas Automation.Since its inception in 2009, the team has won two titles (2011 and 2014), 30 races and 26 poles. With this new agreement, Monster Energy becomes the official energy drink of SHR.

“I’ve always respected Kurt’s talent and determination, and I’m glad it’s staying at Stewart-Haas Racing,” Stewart said. “Kurt can win at every racetrack we visit, and his feedback and attention to detail make our entire organization better.”

“Kurt Busch gives us the opportunity to win races every week and contend for a championship every year,” Haas added. “This is an organization built on winning, and Haas Automation is a company built on performance. Kurt embodies each of those qualities, and it’s why we invest in his abilities.”

“I can’t thank Gene Haas and Tony Stewart enough for the opportunity to be a part of this team,” Busch said. “We’ve accomplished a lot in our two years together, but there’s so much more I want to do for them, for Haas Automation and for Monster Energy. It’s great knowing we’ll be able to keep the momentum we have and extend it into next year and beyond.”

Stewart-Haas Racing is the title-winning NASCAR Sprint Cup Series team co-owned by three-time Sprint Cup champion Tony Stewart and Gene Haas, founder of Haas Automation – the largest CNC machine tool builder in North America. The team fields four entries in the elite Sprint Cup Series – the No. 14 Bass Pro Shops/Mobil 1 Chevrolet for Stewart, the No. 10 GoDaddy Chevrolet for Danica Patrick, the No. 4 Budweiser/Jimmy John’s Chevrolet for Kevin Harvick and the No. 41 Haas Automation Chevrolet for Kurt Busch. Based in Kannapolis, North Carolina, Stewart-Haas Racing operates out of a 200,000-square-foot facility with approximately 280 employees. For more information, please visit us on the Web at www.StewartHaasRacing.com, on Facebook at www.Facebook.com/StewartHaasRacing, on Twitter @StewartHaasRcng and on Instagram @StewartHaasRacing.