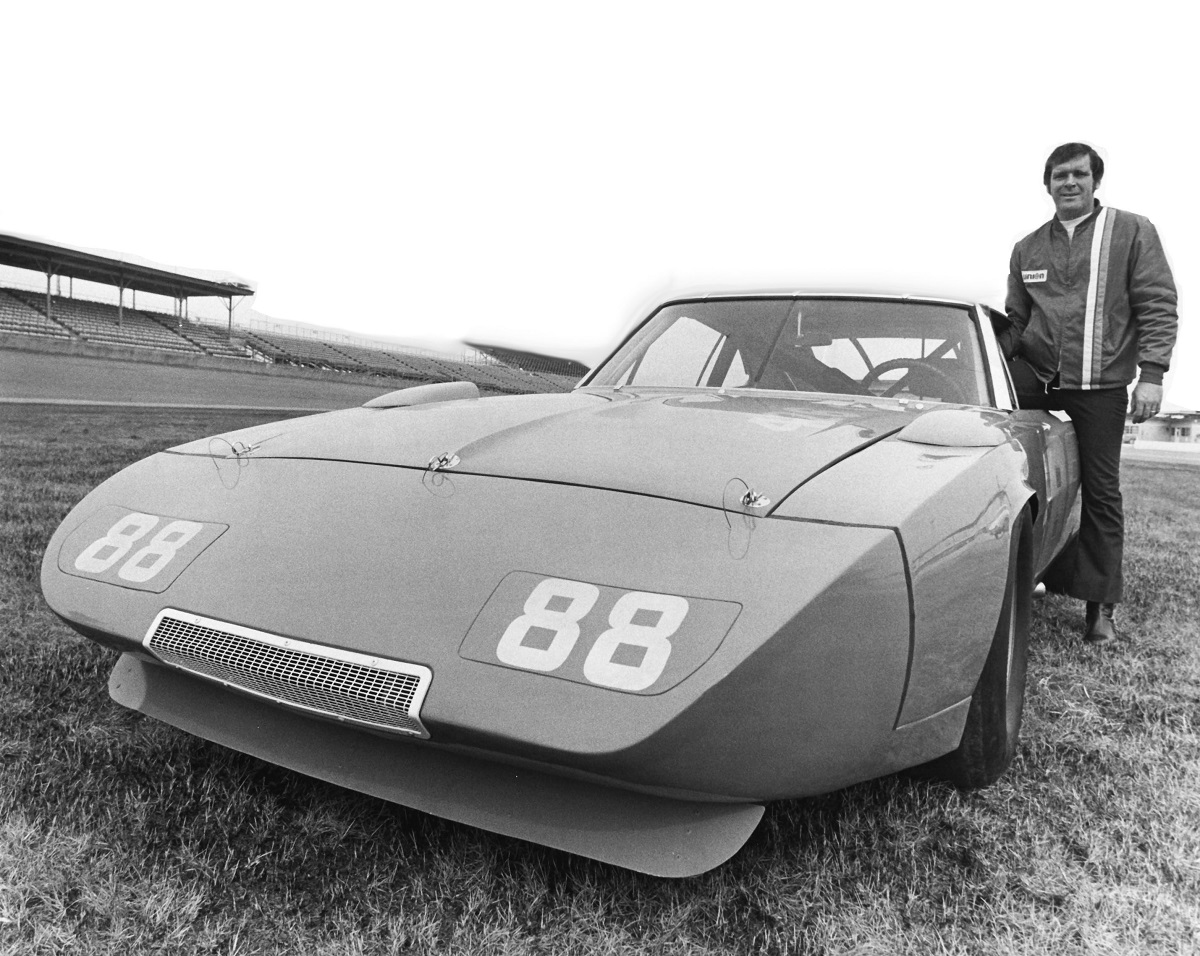 TALLADEGA, AL – In celebration of historic accomplishments by the famous winged cars at Talladega Superspeedway 45 years ago, the track will host more than 75 of the special edition, bold vehicles during the “Aero Warrior Reunion” parade laps around the 2.66-mile mammoth track prior to the start of the CampingWorld.com 500 NASCAR Sprint Cup Series race this Sunday, Oct. 25.

The two parade laps, which will be part of the pre-race festivities prior to the green flag of Sunday’s CampingWorld.com 500, will be a tribute to Buddy Baker, who became the first driver in history to eclipse the 200-mph barrier on a closed course circuit at Talladega Superspeedway on March 24, 1970 while driving the No. 88 winged Dodge Charger Daytona. In addition, the Aero Warrior Reunion at Talladega will be an acknowledgment of Pete Hamilton’s sweep of both 1970 NASCAR Sprint Cup Series races, piloting the No. 40 Plymouth Superbird for Petty Enterprises.

Designed specifically for NASCAR racing, the winged car had a smoothed-out body and a sleek beak-like steel front nosecone while having an iconic, rear aluminum wing that was mounted on tall vertical struts. This wing towered above all other production spoilers, allowing the cars to be superior aerodynamically. Richard Brickhouse actually won the first NASCAR race at Talladega in 1969 piloting a winged Dodge Daytona.

The Aero Warrior’s Reunion consists of street version winged cars as well as a collection of celebrated winged stock cars that competed at Talladega. The stock cars scheduled to be at Talladega include: the 1970 No. 71 Dodge driven by NASCAR and International Motorsports Hall of Famer Bobby Isaac; the famed No. 43 Superbird driven by NASCAR’s “King,” Richard Petty; and the No. 7 Superbird of Ramo Stott, who swept both ARCA races at Talladega in 1970. Other significant race cars are also expected.

Before heading to Talladega, the Aero Warrior’s Reunion will begin on Friday at the Wellborn Musclecar Museum, owned by car enthusiasts’ Tim and Pam Wellborn, in Alexander City, AL. The fun-filled day will feature some of the most legendary names in Aero Warrior history.

On Sunday, however, the attention will be on Baker, known as the Gentle Giant, who passed away in August at the age of 74. Each car in the parade laps will sport a specialized Buddy Baker sticker affixed to the windshield honoring the man known as “Lead foot”. Baker’s monumental official record speed of 200.447 mph in 1974 made him legend, something that he was especially proud of in his career.

“We had the winged cars and the big question was who could get to 200 mph first,” remembered Baker, an International Motorsports Hall of Famer. “Dodge called and asked me if I was interested in going to Talladega to try to accomplish it and I said ‘you bet.’ Bill France (builder of Talladega Superspeedway and President of NASCAR) was there also. I think it was the third lap around the track where we hit 200.447 mph.”

“I came in and said ‘let’s dial this thing up, really set the timing on up, and set a record they will remember.’ The crew said ‘no because the next big criteria would be 300 mph.’ I said ‘put it back on the truck.’ It is one of those records no one can take away from you.”

While he didn’t win in 1970 in a winged car (finished 12th and fifth at TSS), Baker would go on to win four NASCAR Sprint Cup Series races at NASCAR’s biggest and baddest track. He became the first driver in history to win three consecutive events at TSS, sweeping both NASCAR Sprint Cup Series races in 1975 and winning in the spring of 1976. He topped it off with an impressive triumph in 1980, driving his infamous No. 28 “Gray Ghost” paint scheme.

Talladega’s weekend kicks off on Friday (Oct. 23) with practice sessions for both the fred’s 250 Powered by Coca-Cola and the Camping World.com 500. Saturday’s (Oct. 24) slate includes Foodland/Food Giant qualifying for NSCS, as well as qualifying for NCWTS. The drop of the green flag for the fred’s 250 Powered by Coca-Cola NASCAR Camping World Truck Series race (starting at noon CDT) which will feature veterans like Matt Crafton and Johnny Sauter as they try to hold off hard-charging young guns like Erik Jones, Tyler Reddick and others in the NCWTS championship chase. The day concludes in the evening with Talladega Superspeedways traditional infield concert featuring award-winning Mercury Nashville recording artist Easton Corbin. The CampingWorld.com 500 gets the green flag at 1:30 p.m. CDT.

Talladega Superspeedway is NASCAR’s Most Competitive Track (record 88 lead changes in 188 laps), most banked (33 degrees), and longest (2.66 miles), as well as the most fun and fan-friendly, offering up hundreds of acres of free camping, amazing kids ticket prices and special offers for military members and college students. The historic venue, built in 1969, is NASCAR’s “Party Capital” thanks to the track’s infamous infield, which features the traditional Saturday Night concert and the world renowned Talladega Blvd, home of the “Big One on the Blvd” party. It is the site of the most comfortable seats in motorsports, large video viewing boards (a new initiative planned for future implementation at all ISC tracks) lining the frontstretch and endless activities for fans throughout its event weekends. Log on to www.talladegasuperspeedway.comor call 877-Go2-DEGA for more information.