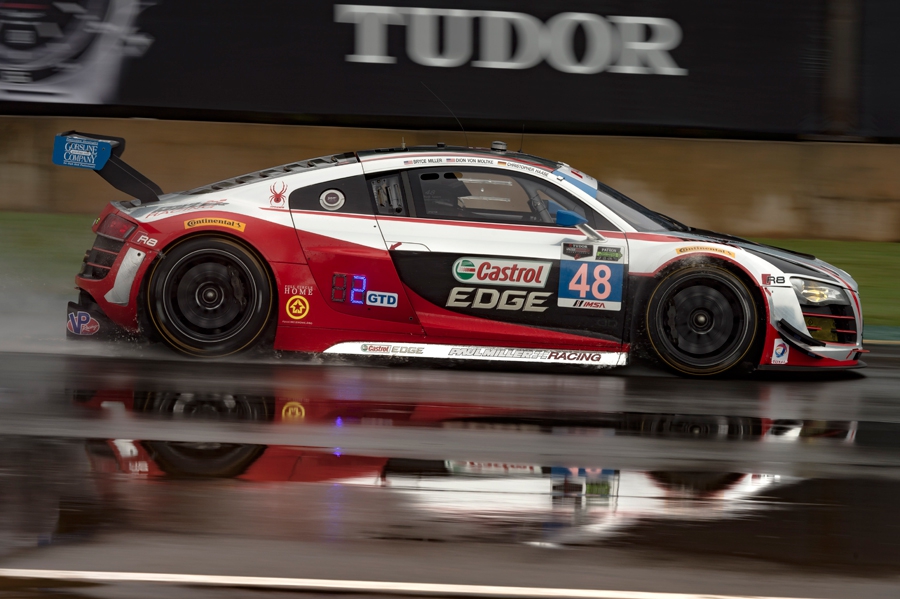 With just one move made this week, the North American debut of the brand new GT3-spec Audi R8 LMS, a car design that has received major fanfare and anticipation in advance of next January’s Rolex 24 at Daytona, is now in doubt.

On Tuesday, Paul Miller Racing announced that they will switch from Audi to the equally praised Lamborghini Huracan for their third season of competition in the GT Daytona class of the IMSA WeatherTech SportsCar Championship. PMR, who featured Audi factory supported professional Christopher Haase and veteran Dion Von Moltke as their full time drivers in 2015, was the only team in IMSA last season to use the Audi R8 LMS in every race last season. Only two other teams, Compass 360 Racing and Flying Lizard Motorsports used the R8 in limited campaigns in 2015.

C360 joined the IMSA fleet at Lime Rock Park and struggled to be competitive whilst having to play catch up against the already established GTD rivals. Flying Lizard, who was a full time runner in 2014, only contested the races tied around the North American Endurance Cup, with the majority of their racing personnel focused on the Pirelli World Challenge championship. Neither team has announced their intentions for 2016 at this time.

With questions raised about companies tied to the struggling Volkswagen group (Audi is among them), the move made by PMR is understandable, considering the team’s desire to stay among the front runners after finishing third on the GTD points table in 2015, finishing third or better in four out of the ten races contested.

The potential loss of a manufacturer’s presence in GTD is in a way odd considering the trend of several different brands potentially joining the fleet in 2016, so much so that rumors of a cap on different car types were brought up during silly season a few months ago, but for now appear to have been extinguished. With Audi’s future in IMSA and North American sports car racing in question, a run that has produced many wins and championships since their entry in 1999, there are other stories that are also gaining steam as the off season continues…

The biggest news so far outside of Audi is tied to the future of the Prototype Challenge division. It appears that the class will continue at least through 2016, if not into the 2017 campaign, as IMSA looks for a viable replacement. After an initial test of the new LMP3 cars at Watkins Glen, New York came back with mostly skeptical reviews, the biggest complaint being a lack of pace when compared to the current ORECA-built PC machine, it appears that the class will continue on, yet with some major modifications to the race cars.

The most significant addition will be the introduction of traction control in the PC division for the first time. Since their debut in the former American Le Mans Series in 2010, the car’s lack of traction control became an increasing concern when the adoption of FIA Driver Ratings became part of the class protocol the following year. With an increased number of amateur and inexperienced drivers joining the division, the lack of TC started to become an issue, especially in wet track conditions as evidenced last month in the season ending Petit Le Mans at Road Atlanta.

Along with the traction control addition, PC engine provider Katech will also supply a slightly smaller, yet more powerful Chevrolet V-8 engine for all the PC runners in 2016. The increase in power came as a necessary addition, as the equally new for 2016 regulations in the GT Le Mans division, will likely produce cars that will run lap times that could meet or even exceed the pace shown by the Prototype Challenge entries in 2015.

With PC’s future now secure, the concern now shifts to car count. At this point, only back to back champions CORE autosport and Performance Tech Motorsports have confirmed a return to the division for 2016. While they are in, PR1-Mathiasen Motorsports may be headed elsewhere. The Bobby Oergel-run operation has looked at a move up to the Prototype division in 2016, as a trial run prior to the debut of the new Daytona Prototype International class for 2017. According to sources, Oergel could acquire the Wirth Research-designed Honda ARX-04b coupe for 2016, a car that competed only once in 2015, at the Rolex 24 at Daytona with Extreme Speed Motorsports.

As always, follow OnPitRoad.com on Twitter (@onpitroad_) and Matt Embury (@MattEmbury) for continued updates during the 2016 IMSA Silly Season.