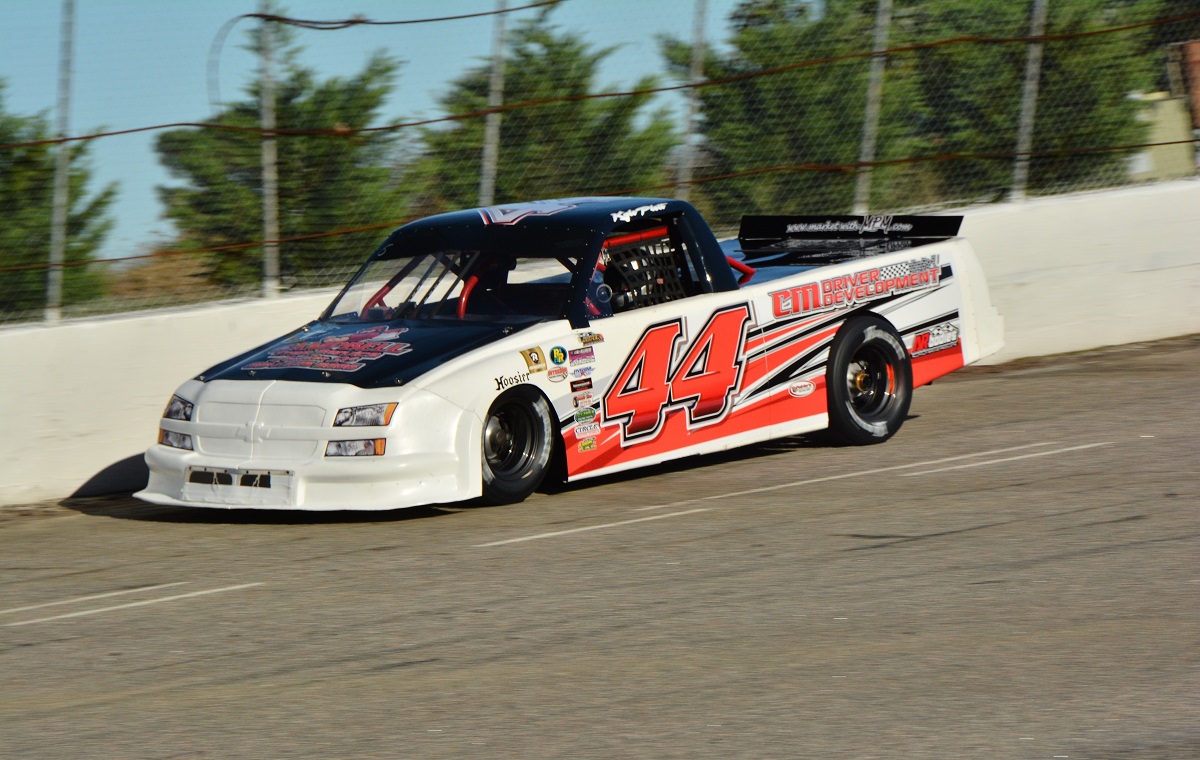 The annual UNOH Myrtle Beach 400 race weekend brings out some of the best racers around the southeast and this was no exception. First up was the Challenger Late Model division. Canadian dirt track standout, Amber Balcaen, piloted the No. 10 CM Driver Development & Leasing Chevrolet for the 50 lap feature. This event was the first asphalt start for the 23-year old driver from Manitoba.

Balcaen was scheduled to make her first asphalt appearance two weeks ago for the team at Tri-County Speedway in Hudson, NC, but lighting malfunctions at the speedway forced cancellation of the event.

Balcaen adjusted well to the tricky layout of the Myrtle Beach Speedway. The .563 mile speedway has very abrasive surface and tire management was the buzzword for the weekend. This provided another huge learning curve for Balcaen, who normally races 410 sprint cars on dirt. The CMDD crew led by racing veterans, Troy Carnes and Billy Poindexter, coached Balcaen throughout practice to prepare her for the 50 lap feature.

Balcaen ran well in the early stages of the event, running consistent lines and conserving tires for a late race push toward the front. Late in the event, however, the handling went away on the No. 10 Chevrolet with Balcaen obviously struggling to hang on to the car.

At the conclusion of the event, it was discovered that the right rear tire had been cut by debris and was the cause of the handling issue. CMDD owner, Troy Carnes, commented on how impressed he was that Balcaen was able to hang on to the car, keep it out of the wall and bring it to the finish with her limited asphalt experience.

She ended the night in 21st, but suffered no damage as a result of the flat right rear. This was a testament to the well prepared car CMDD provided and Balcaen’s talent behind the wheel.

Next up for the CMDD team was the Southeast Super Truck Series event. The team had two trucks competing in the 100 lap feature. Blake Jones, winner in the ARCA series event at Talladega Superspeedway earlier this year drove the No. 11 Chevrolet with Kyle Plott behind the wheel of the No. 44 Campbell Tree Service/CAT Recovery Services Chevrolet. Both trucks performed well in practice and both drivers had tire management at the top of their list. Jones begin working his way through the field and was looking impressive early in the race when the No. 8 truck of Ed Surrett, bounced off the backstretch wall and caught the right front corner of Jones’ truck.

After a quick pit stop by the CMDD crew to repair the right front fender and right side door skin, it was determined that the contact had bent a tie rod and knocked out the toe angle on the truck. Jones, being a veteran driver, was able to keep the truck in competition, but the damage had caused a severe tight condition. Jones managed a respectable 11th place finish. Plott, a 19-year old driver from Marietta, Ga, overcame a huge hurdle on Saturday in the Southeast Super Truck Series event. The 2014 Whelen All American Series Rookie of the Year actually had to make a pit stop on lap 25 for fuel due to a small fuel cell. A task that is usually not needed in 100 lap short track event.

The CMDD crew quickly topped off the fuel cell and Plott returned to action but had the entire field in front of him and only 75 laps to work his way to the front. A feat that would be especially challenging because of the abrasive surface.

Plott answered the challenge, however, methodically working his way through the field, taking care of his tires and keeping the Campbell Tree Service/CAT Recovery Services Chevrolet clean and straight. He ended the night with a very impressive second place finish. Plott credited a well prepared truck and crew for his runner-up finish.

The CMDD team will also participate in week number two of the UNOH Battle at the Beach fielding two NASCAR Late models for the 200 lap feature with bothers, Kyle and Kason Plott, behind the wheel.

CMDD is a driver development and leasing that has a full fleet of race vehicles and offers drivers the opportunity to develop their shills behind the wheel on some of the best short tracks in the country. Drivers are provided driver coaching, tire and equipment management instruction, and one of the most important elements of a successful driver, proper feedback to the crew chief. The team is led by Troy Carnes and Billy Poindexter who together have a combined 53 years of experience in racing, with numerous wins and championships. Carnes and Poindexter have both had success at all levels of motorsports including NASCAR national touring series. If you are interested in partnering with CMDD or becoming a driver for the team, please contact Turn 4 Promotions at info@turnfourpromotions.com Please include CMDD in the subject line.