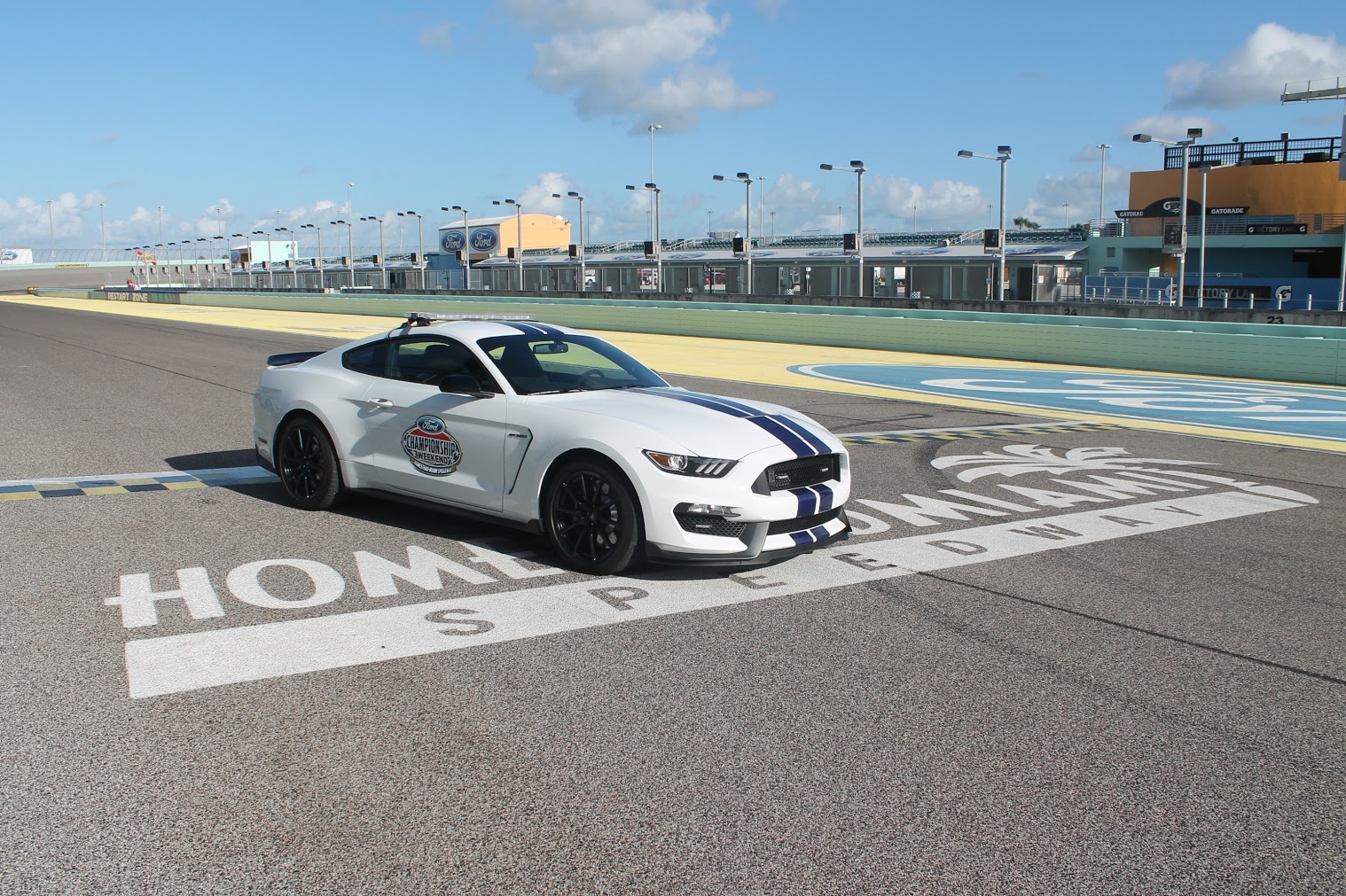 The Shelby GT350 Mustang will lead the field to green ahead of NASCAR’s final race, the Ford EcoBoost 400 which will determine the 2016 NASCAR Sprint Cup Series championship.

The 2015 Ford Championship Weekend marks the 14th year Ford has served as title sponsor of the NASCAR finale.

DEARBORN, Mich. – November 17, 2015 – For the past 13 years, Ford Motor Company has showcased innovative, fun to drive and downright impressive performance vehicles to NASCAR fans around the world as part of the season-ending Ford Championship Weekend at Homestead-Miami Speedway.

Year 14 is no exception as the 2016 Shelby GT350 Mustang will lead the field to green in the season-ending and championship-deciding Ford EcoBoost 400 Sunday (Nov. 22) afternoon with Ford Motor Company Executive Vice President and President, the Americas, Joe Hinrichs behind the wheel.

“The Shelby GT350 Mustang is the most track-capable Mustang ever, making it the perfect pace car for the Ford EcoBoost 400 during Ford Championship Weekend at Homestead-Miami Speedway,” Hinrichs said. “This is a great chance for the fans at Homestead, and millions more watching around the world, to see the new GT350 in action.  Knowing this race will determine NASCAR’s 2015 champion makes it even more special.”

2015 marks the third straight year Mustang has paced the Ford Championship Weekend premier event, joining the 50th Anniversary Edition Mustang in 2014 and the Need for Speed Mustang in 2013.

One of Mustang’s most iconic performance nameplates of all time, the Shelby GT350 builds on the dramatically improved sixth-generation Mustang to create a truly special driving experience.

Under the hood is a high-revving, free-breathing 5.2-liter V8. It is the first-ever Ford production V8 with a flat-plane crankshaft. It is also the most-powerful naturally aspirated Ford production engine ever, generating 526 horsepower and 429 foot-pounds of torque.

The GT350’s ultra-quick responsiveness comes from Ford’s first-ever application of continuously controlled MagneRide shock absorbers. This system electronically monitors and adjusts the suspension thousands of times per second for optimum performance and a dynamic driving experience.

The GT350’s brakes are the biggest and most powerful ever installed on a production Mustang. This Ford-designed system features massive, two-piece cross-drilled iron discs mounted to aluminum hats, which reduces un-sprung weight and reduces heat transfer into the hub and bearing. They are clamped at the front by Brembo six-piston calipers, and four-piston calipers at the rear.

Every component and shape of the GT350, which also will pace the NASCAR XFINITY Series Ford EcoBoost 300 race at Homestead on Saturday (Nov. 21), is optimized to work in harmony resulting in a world-class, street-legal race car with everyday drivability and road manners.

The weekend will kick off with the Ford EcoBoost 200 Truck Series race Friday (Nov. 20) with the 2015 F-150 SuperCrew 4×4 model in Lariat trim level pacing the field. It is painted in White Platinum, and has a Camel leather interior.

This marks the 14th year Ford has served as title sponsor of Ford Championship Weekend.

Ford Motor Company, a global automotive industry leader based in Dearborn, Mich., manufactures or distributes automobiles across six continents. With about 197,000 employees and 67 plants worldwide, the company’s automotive brands include Ford and Lincoln. The company provides financial services through Ford Motor Credit Company. For more information regarding Ford and its products worldwide, please visit www.corporate.ford.com.