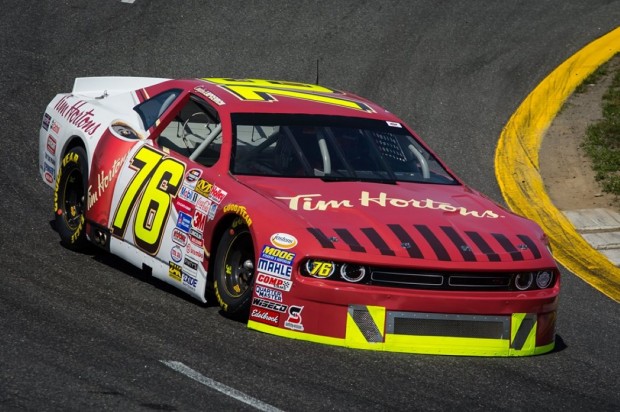 November 30, 2015, GRIMSBY, ON – The Lapcevich family name holds great esteem in Canadian Motorsports. For more than 25 years various Lapceviches have competed successfully in numerous forms of racing – all showcasing Tim Hortons as a marketing partner.

The end of 2015 brings an end to one of Canadian motorsports’ longest partnerships.

“We were told that Tim Hortons would be refocusing their marketing efforts after this year,” said Jeff Lapcevich. “It was difficult to hear, and I get the feeling it was difficult news for them to deliver as well.”

Lapcevich is a veteran of the NASCAR Canadian Tire Series as well as other prestigious racing series and events. He raced as teammate to his brother Jim Lapcevich for many years and to his late brother Joe Lapcevich. They were all preceded behind the wheel by family patriarch and team founder of Fastline Motorsports the late Joe Lapcevich Sr.

More recently Jeff’s children Cayden, Treyten, and Ryden have begun their own racing journeys, and that is something that won’t change.

“We are actively seeking new marketing partners to maintain our high level of competition,” said Lapcevich. “We are grateful for the long and generous support we received from Tim Hortons , and we are ready to provide a new partner with exciting marketing opportunities. Tim Hortons ended numerous marketing relationships this year, and we happened to be one of them.”

The 2015 racing season was one of change and progress for Fastline Motorsports. Jeff Lapcevich announced that he would be stepping away from the driver’s seat to allow his 15-year-old son Cayden to race in Canada’s only national stock car series.

His track championship and stellar results helped earn Cayden NASCAR’s Youth Achievement Award for drivers among all of NASCAR’s weekly racing series. He beat out a huge field of young talent to earn the accolade, and he was also named NASCAR’s Rising Star in 2015. He will attend the NASCAR banquet in Charlotte, North Carolina, to receive his award. The Rising Star Award is given to the driver who shows the most promise based on results among all of NASCAR’s touring series. It is the first time a Canadian has won the award.

The Lapcevich family has plenty to be excited about as the boys catapult through the ranks of motorsports. They plan to continue working with long-standing partners Springers Meats, Cathcart Trucking, Castrol Canada, Troy Cove Marine, and Epic Racewear while seeking new primary partnerships. For more information on Jeff Lapcevich and his racing family, visit www.LapcevichRacing.ca. For interview requests, contact Adam Ross at 519-212-8632 or adamrossenterprises@gmail.com.