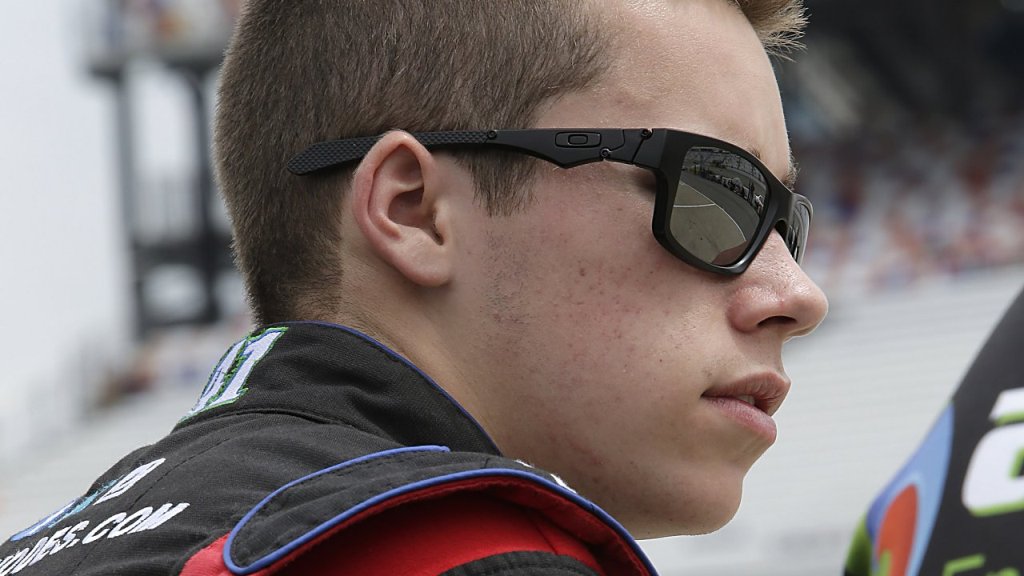 Louisville, KY (December 15, 2015) – 18-year-old Louisville, Kentucky, native and NASCAR K&N Pro Series East (NKNPSE) Champion, Ben Rhodes announced today he has signed with ThorSport Racing for the 2016 NASCAR Camping World Truck Series (NCWTS) season. Rhodes will pilot the No. 41 Alpha Energy Solutions Toyota Tundra as he competes for Sunoco Rookie of the Year honors and the series’ championship title in 2016.
Rhodes, the 2014 NKNPSE Champion, Rookie of the Year, and Most Popular Driver, is looking forward to competing with a championship-caliber organization in 2016.
“I’m grateful for the opportunity to race full time with ThorSport Racing next season,” said Rhodes. “I was excited when I received the phone call. The team as a whole has won two out of the last three Truck Series championship titles, went to victory lane many times this year, and all three trucks were within the top six in points. I feel confident I am joining a team that will be able to produce top-notch Toyota Tundras for me to contend for poles, race wins, Rookie of the Year honors, and the championship.”
After his championship year in the NKNPSE, Rhodes raced a part-time, 10-race schedule in the 2015 NASCAR XFINITY Series, earning his first NASCAR national series pole in just his seventh start at Road America in Elkart Lake, Wisc. (August), and picking up a series-best seventh-place finish in his first series start at Iowa Speedway in Newton (May).
“The 2015 season was a great way to get my feet wet in the upper levels of NASCAR,” said Rhodes. “I gained a lot of knowledge on how things work, and I feel as though I’m ready for a full-time ride.  That is why I’m looking forward to the 2016 season with ThorSport Racing. I will have a crew chief that I can work closely with week to week and a team that knows what driver will be in the seat every race. We can focus on being successful, starting at Daytona and ending at Homestead.”
Based out of Sandusky, Ohio, ThorSport Racing is the longest-tenured NCWTS team, competing annually since 1996, and NASCAR’s only full-time team based in Ohio.
“We are thrilled to have Ben (Rhodes) join our team behind the wheel of the No. 41 Alpha Energy Solutions Toyota Tundra in 2016,” said Matt LaNeve of ThorSport Racing. “Ben’s experience and success in the K&N Pro Series East, coupled with his NASCAR XFINITY Series starts, have produced a fruitful start to his racing career and we are honored to have him competing for ThorSport Racing next season. Ben is an outstanding, hands-on driver, with a ‘go-getter’ attitude, and we look forward to him leading laps, winning races, and contending for a championship title. We are confident he will represent ThorSport Racing, Toyota and Alpha Energy Solutions with pride.”
Rhodes is not new to the NCWTS. The Louisville, Kentucky, native made four starts in the series in 2014, picking up three top-10 finishes, including a series-best fifth-place finish at Phoenix International Raceway in Avondale, AZ (November).
“I’m looking forward to returning to the Truck Series,” explained Rhodes. “With only 10 races in the NASCAR XFINITY Series and four in the NASCAR Camping World Truck Series, this is a huge step forward for me. The Truck Series is extremely competitive, and I am up for the challenge.”
Alpha Energy Solutions, a commercial and industrial mechanical self-performing service provider, based out of Rhodes’ home-town of Louisville, Kentucky, will continue to support Rhodes as the primary sponsor on his Toyota Tundra in 2016. Furthermore, a familiar number will adorn the quarter panels during his rookie season, the No. 41, a number Rhodes utilized in two seasons of NKNPSE and NASCAR Whelen All-American Series Late Model Stock competition, earning eight poles, 11 wins, 27 top-five finishes, and 35 top-10 finishes in 46 starts.
“I have to thank Alpha Energy Solutions for continuing to support my racing career. Also, we will be running the No. 41 on our Toyota Tundra, which is the number I used throughout most of my NASCAR career and the number I used in the K&N Pro Series East when I became the 2014 series champion.
“We have the team, the number, and the sponsor to be successful this year. I am very eagerto get to Daytona with ThorSport Racing and race the No. 41 Alpha Energy Solutions Toyota Tundra.”
Rhodes’ crew chief, additional sponsors, and the paint scheme will be revealed in January.
The 2016 NASCAR Camping World Truck Series season kicks off on Friday, February 19 at Daytona International Speedway in Daytona Beach, FL.
For more information on ThorSport Racing, visit www.thorsport.com.
For more information on Ben Rhodes, visit www.benrhodes.com.
Follow Ben on Twitter at www.twitter.com/benrhodes.
Follow Ben on Facebook at www.fb.com/benrhodesinc.
Follow Ben on Instagram at www.instagram.com/benrhodes.