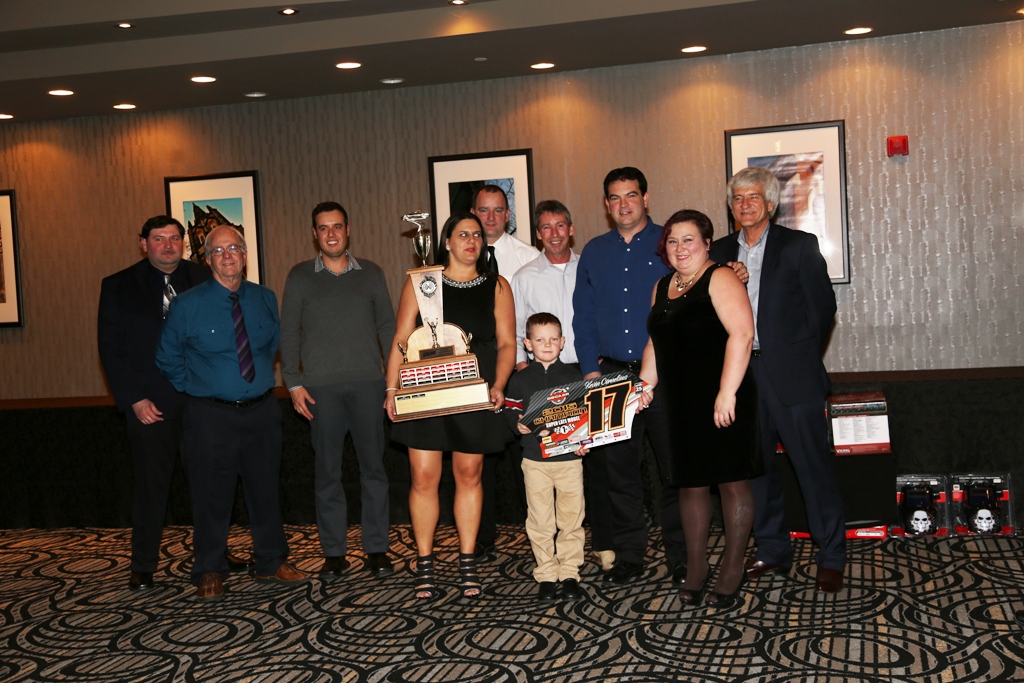 Following a successful season that finished with a new series champion, Dickies OSCAAR Outlaws Presented by London Recreational Racing drivers celebrated their accomplishments on Saturday night at the year-end banquet.

With plenty of drivers in attendance, awards were handed out to some drivers, as well as a plaque for each of the drivers in the top-10.

With seven wins in the nine races across the season, Kevin Cornelius experienced a dominating run en route to scoring his first series championship.

“I’d like to thank Dave Gainforth and the OSCAAR staff, officials, drivers, teams and families for providing us an opportunity to do something that we love to do,” Cornelius said. “Mike McColl – I could’ve spent an hour on this one, but I know he hates that. It’s been an honor and a privilege to drive his cars and can’t thank him enough for turning us into a championship winning team, twice. More importantly, I’m proud to call you a friend. Thanks for what you and your staff have done for us. To all the sponsors over the years, I thank you for your support and generosity. To my family, my children and friends that follow us to each track every year, I thank you for your support.

“Finally, to this group of guys that were still supposed to be up here. It’s been a privilege to the voice of this team for 10 years now. I played a small role in the success of this team. It’s all these guys hard work and determination and passion for the sport that drives the success we’ve been fortunate to experience. I can’t begin to express the admiration and respect that I have for each one of you. Thanks to all your commitment and sacrifices you made. You should be proud to call yourself champions.”

Beyond taking home the championship, Cornelius also picked up the inaugural Inside Track Hard Charger Award, which is given to the driver who advanced the most positions during the course of each feature race throughout the season.

Tyler Hawn would pick up the Hard Luck Award after blowing a motor in the season opener at Sunset Speedway, followed by a hard crash at Peterborough Speedway mid-way through the year.

Shane Gowan picked up a pair of awards on the evening for his accomplishments. He picked up the best appearing car award after sporting a sparkly orange paint scheme throughout the year. He also picked up the inaugural Ironman Award, which is given to the driver who made all of the races throughout the season, despite facing some difficult diversity along the way.

“The Ironman Award was for two things – one for making every race, and the guy who did something spectacular during the year that was a cut above everybody else,” Gary Elliott, the award’s creator, said. “It is for example, if you wrecked your car in the warm-ups and didn’t put it in the trailer and go home, or if you blew your motor in the warm-ups and didn’t give up on the night. That was to me something to me that showed someone who never gave up to the last second.”

Despite suffering some hard wrecks throughout the year, Gowan stayed committed to attending each of the events. That commitment showed during the opening weekend at Sunset Speedway in May as after blowing a motor on the first day of the two-day event, he drove home and brought his back-up car to run on the second day.

Corey Jones received the Most Improved Driver Award after finishing fifth in points with three top-fives and eight top-10s on the season.

Glenn Watson received the Sportsman of the Year Award as he raced each of his competitors cleanly and respectfully throughout the season, as highlighted by a 15-lap side-by-side battle with J.R. Fitzpatrick at one point. The past series champion had a solid season en route to finishing fourth in points with five top-fives and eight top-10s.

Sean Grosman picked up Rookie of the Year after finishing third in points with three top-five and seven top-10 finishes.

“I first off want to thank the guys – they have been with me the past couple of years, some since the start,” Grosman said. “Can’t thank them enough. Thanks to OSCAAR. Thanks to my wife for letting me do this. Kevin set the benchmark this year for a good season – congratulations.”

With a successful season behind them, all of the Outlaw drivers are looking towards the new season ahead, making plans already and putting together their cars. Despite the dynamics for OSCAAR changing in the year ahead, the commitment by OSCAAR’s officials and drivers remains the same.

“We’ve been around for 25 years, and we’ll be around for another 25 years,” series president Dave Gainforth said at the banquet. “There will be racing in 2016, in 2017 and the years after that.”

To see more photos from the banquet, check them out at https://www.facebook.com/ashleymccubbin.media/.