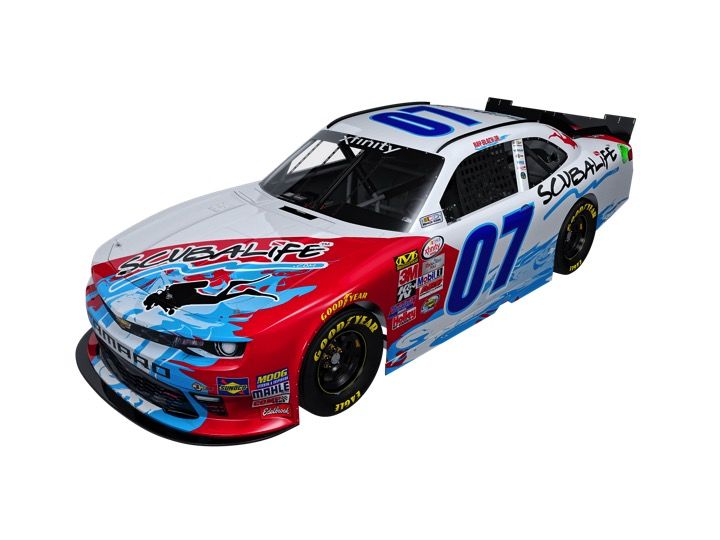 FLAGLER BEACH, Fla. (January 13, 2016) – Ray Black Jr. is thrilled to be taking the next step in his racing career, as the driver will compete in the full season of the 2016 NASCAR XFINITY Series (NXS). Black, who had a breakout year in 2015 while competing in the NASCAR Camping World Truck Series, is ready for the challenge of NASCAR’s second-tier series with the continued support of Bobby Dotter’s SS Green Light Racing and crew chief Jason Miller.

“I’m very eager for this season to start and to take the next step in racing by moving up to the NASCAR XFINITY Series!” said Black. “It’s a much bigger stage with some of the best racing competition in the world. The truck series was a great starting point for me in NASCAR, but it’s always good to keep challenging yourself, and I feel that’s what this move will do for me. It’s a great opportunity for me to show everyone what I can do!”

The move to the NXS also serves as a historic milestone for SS Green Light Racing, as it will be the team’s first full-time season in the series. Owner Bobby Dotter previously focused his team strictly on the truck series but is passionate about the opportunity to challenge his team by moving up to the NXS with Black. The team has since been busy during the offseason prepping cars for the year.

“We ran one XFINITY race with Ray last year, and it went much better than everyone expected,” stated Bobby Dotter, team owner. “Ray really took to the feel of the car! Our goal was always to be in the XFINITY Series with Ray, we’ve just sped up that timeline a little bit. Ray is ready for the step up, and the team is ready to grow with him next year.”

“It’s exciting knowing that I’ll be the first full-time XFINITY team for Bobby. It’s a cool bit of history to be part of and a great opportunity for everyone involved,” Black explained. “The team and I really meshed well together last year! We kept growing and getting better as the season went on. I think we’ll only keep improving as a team with this coming season.”

Black had a standout year in 2015 when he finished 11th in the NASCAR Camping World Truck Series championship standings, earning one top-five and 12 top-15 finishes in 23 races. With an additional 10 races and a bigger field of competition in the NXS, Black will be using the momentum and confidence he gained in 2015 to have an even stronger 2016 season.

“Running the full season last year gave me a lot of confidence that will help me this year,” stated Black. “We know we can run competitively at a high level of performance. We might have a little bit of an adjustment period with the XFINITY cars since we haven’t consistently run them other than the race we did at Texas in the fall last year, so we do have a lot to learn. But once we get a feel for the cars, I think we should be good to go. We really got some solid momentum going in 2015, and I don’t see why we can’t better that in 2016!”

“I think finishing in the Top-15 in the championship standings is a solid goal for the year as a driver,” he continued. “As far as a team goal, we are really looking to log all the laps we can and minimize any mistakes that we can. It should be a fun year, and I can’t wait for it to get started!”

Fans can follow along with Black’s 2016 season in the NXS following him and his sponsor, ScubaLife, on Facebook, Twitter and Instagram at @TeamScubaRacing and @RayBlackJr. Learn more about Ray Black Jr. and Team Scuba by visitingwww.rayblackjr.com and www.teamscuba.com.

Ray Black Jr. mostly grew up in Florida after relocating from Montgomery, Alabama at age 9. It was here that Black Jr. fell in love with deep sea diving after a couple of scuba trips with his father. His passion for motorsports came later at age 14 after playing some racing video games. He began competing in the Florida Mini Cup Racing Association (FMCRA), where finished in the Top-5 in every race and also secured the FMCRA Junior All-Star Championship. In 2013, Black, Jr. moved up to racing pro late models and then into the NASCAR Camping World Truck Series in 2014. During that year, he got his first taste of true NASCAR racing when he competed in seven races for SS Green Light Racing. The 2015 season marks Black Jr.’s first full year in one of NASCAR’s national touring series.

ScubaLife is a social network focused on building an online community for divers of all levels of experience and passion. Its goal is to attract new divers and keep current divers active by creating a space for them to connect and share their experiences online. ScubaLife looks to promote the diving lifestyle as something fun and exciting for people of all ages. Users can connect with other divers, instructors and retailers within the community. Having grown up deep sea diving, Black Jr. and ScubaLife have an easy, natural partnership. ScubaLife will appear on Black Jr.’s No. 07 Chevy Silverado for the entire 2015 season.