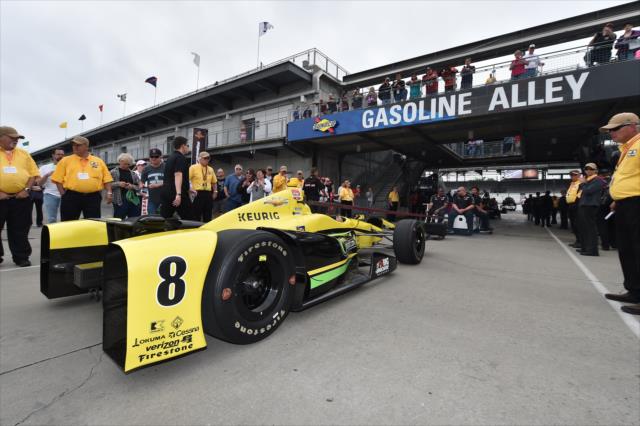 With the Monday announcement that Chip Ganassi Racing will once again run four cars on a full time basis after signing former Formula One and Indy Lights veteran Max Chilton, the focus in terms of full time opportunities is centered now on just one seat alone: the second seat at Dale Coyne Racing.

The most likely candidates mentioned for the final complete tour chance are two-time Cooper Tires Indy Lights Series runner-up Jack Harvey and multi-year IndyCar Series veteran Sebastian Saavedra. Although there are possibly other candidates to fill the opening for the Chicago-based team, both drivers come with some funding in hand, as did Chilton, a major ploy in the Ganassi deal. Harvey has a variety of British backers, while Saavedra continues his pairing with AFS Racing’s Gary Petersen, with whom he has been tied to in both Indy Lights and IndyCar Series competition for several years.

So with those latest announcement and rumors, here is how the full time fleet and Indy 500 field currently shapes up entering the month of February.

With Karam focusing on the Indy 500 and a ride in the IMSA WeatherTech Sports Car Championship with Lexus, the team has chosen to go with the well-funded former Formula One pilot Max Chilton in their fourth full-time entry for 2016. Chilton had initially hinted at running another season in the Indy Lights Series before possibly moving to IndyCar in 2017 with Carlin Racing, but has bumped up the move to join a Ganassi team that already features three drivers who have either won or reached the podium in the Indianapolis 500.

Expect a major bounce back from Andretti, if Honda produces a more competitive aero kit and engine as opposed to 2015. Munoz should be back despite a difficult 2015 tour that lacked high finishes. The team could offer a fourth or even fifth car for the Indy 500. Their full time driver in the FIA Formula E Series Simona de Silvestro is one candidate, as is the aforementioned Kurt Busch.

The rumor of Wink Hartman’s pulling back of support has occurred a year early, after initial reports suggested he would continue to support the team for 2016 before pulling out. Nevertheless, the return to Ed Carpenter Racing has taken on Josef Newgarden for at least a full time effort in 2016. Beyond that, the jury is certainly out. Hartman’s business partner Sarah Fisher is also no longer a team owner, but has been kept by the team to focus on sponsorship developments for ECR. The biggest loser in this situation however, could be Indy 500 veteran J.R. Hildebrand. The reduction in funding may mean the team might not have the money to afford fielding an extra car for the Grand Prix of Indianapolis and the Indianapolis 500 this year, as they have for the American the past two seasons.

After rumors that Jack Harvey was talking with Bryan Herta about a full time seat for 2016, the team will continue with Gabby Chaves as their driver of choice. Harvey could still be in play, however that may only be in the form of a ride only in the Indianapolis 500, assuming he does not get the ride mentioned below.

The persistence of Conor Daly has paid off in the form of a full time ride for the 2016 IndyCar Series season with the Windy City-based runners. A second full time entry is expected with Jack Harvey and Sebastian Saavedra both mentioned as potential candidates. Both drivers would bring much welcomed backing to one of the least funded teams on the IndyCar circuit. The team will also run and/or support for the Indy 500. Coyne will prepare the Jonathan Byrd’s Racing entry for USAC star Bryan Clauson, while Pippa Mann will return for her fourth effort with DCR in the Greatest Spectacle in Racing.

After enjoying their most productive season since 2005, the Ohio-based runners have much more security for this single full time effort for Graham Rahal. Sponsor Steak & Shake restaurants has increased its commitment in the team, while defending Indy Lights champion Spencer Pigot will join Rahal in the season opener at St. Petersburg, Florida and also for the two Indianapolis Motor Speedway events.

Unable to secure a second year with Chip Ganassi, the 21-year old Pennsylvanian has returned to the same team with which he made his IndyCar debut at the Indy 500 two years ago for another one-off shot at the Greatest Spectacle in Racing. Although Dennis Reinbold has hinted at a potential future where the team returns to contest more races, 2016 will not be the year for that quite yet.

The ambitious largely female run and supported effort that was announced last May by former SRT Viper team manager Beth Paretta has continued their preparations for the 100th Indy 500. While the team stated that they would align with another team for their first effort at the Brickyard, the identity of that team has yet to be revealed. Despite that limitation, their presence during the month of May is all but assured, baring unforeseen circumstances. The strong outing by Legge last weekend in the Rolex 24 at Daytona, could draw even more attention to this situation too.