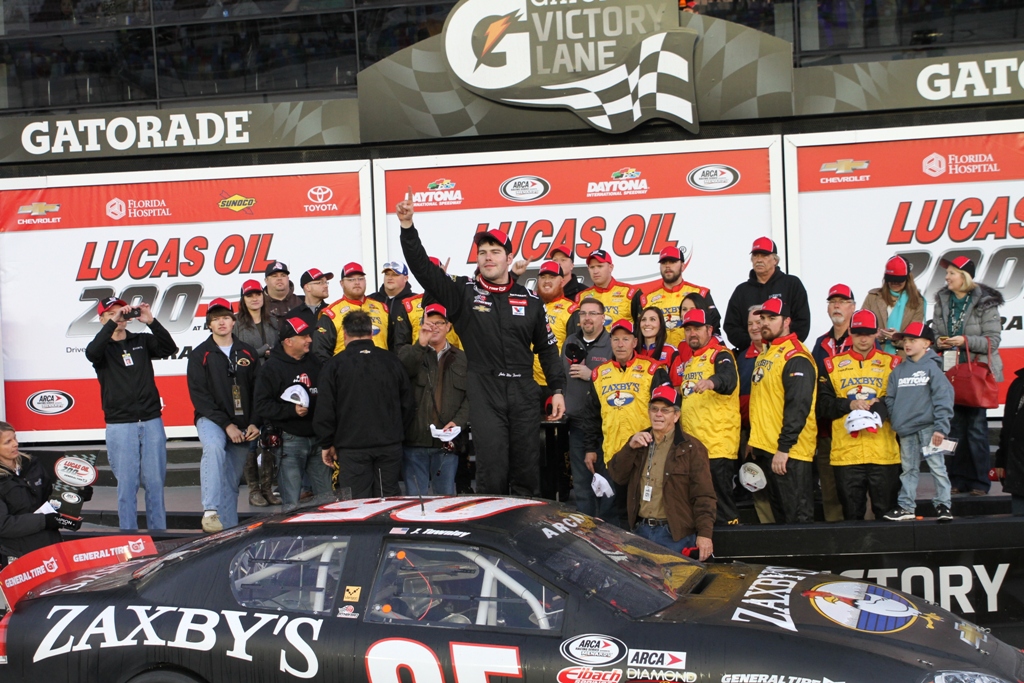 DAYTONA BEACH, Fla. (February 13, 2016) – ARCA Racing Series presented by Menards veteran John Wes Townley has a secret weapon at Daytona; his name is Kevin Reed. Townley, in a brand new Zaxby’s Chevrolet, returned to the Gatorade Victory Lane at Daytona Int’l Speedway with an old friend. Reed who crew-chiefed Townley to Victory Lane in 2013 at Daytona with a different team, reunited with Townley just in time to win the Lucas Oil 200 Driven By General Tire Saturday afternoon.

“This is just awesome,” Townley said. “We had it planned from the beginning, but plans rarely work out at Daytona, but they did today. The calls Kevin Reed made from pit road were spot on. He was with me for my win here in 2013 and it definitely means a lot to have him back. What a way to start the year. This is really special.”

However, Reed wasn’t the only secret weapon Townley had during the 80-lap, 200-mile race.

“It was quite a ride there for a while, running three-wide at times, but my spotter…Terry Cook…he really helped me out. He’s won Camping World Truck Series races and I learned so much from him today. I just want to thank Zaxby’s, ARCA and General Tire…this is really cool to be a part of.”

The win not only reunited Townley with Reed, it was the first win for the new Tony Townley-owned Athenian Motorsports team.

Eighteen-year-old rookie William Byron, in the No. 55 Liberty University Toyota, finished second, three lengths away (.209 seconds/margin of victory) at the final stripe. It was Byron’s career-first start at Daytona.

“I was really looking, watching my mirrors to see what we might be able to do,” said Byron, who tied his career-best ARCA finish. “I came over the radio to see if I could back up to anyone to get a run, but by then we were only in a tight pack of three, so I had to sit tight.

“I just want to thank Venturini Motorsports. They gave me a great racecar all weekend. I was really just learning all day, trying to stay patient and learn the process of drafting in the pack. When it got three-wide, you had to learn on the fly and put your trust in the guys around you.”

Kyle Weatherman, in the No. 58 Lira Motorsports Ford, battled from the 32nd starting position on very little practice as a result of an engine change Friday. The Wentzville, Missouri driver also barely missed a multi-car crash just as the leaders began the third lap.

“Maybe that was a blessing in disguise (starting in the back),” Weatherman said. “I could have been right in the middle of that. Starting in the back definitely helped today. Everything happens for a reason. After that first crash, I had to keep my eyes wide open.”

Weatherman was referring to a nine-car wreck in the tri-oval, triggered when Derrick Lancaster made contact with Cole Powell in a tight pack. Bobby Gerhart, Kevin Thomas, Jr., Shane Lee, Austin Wayne Self, Jairo Avila, Mark Thompson, Cole Powell, Lancaster and Gus Dean were involved. Gerhart, Self, Lee, Dean and Avila were evaluated in the infield care center and released.

“Today was a big learning curve,” added Weatherman, also making his Daytona debut. “This is the biggest track I’ve ever been on. I learned everything this place could throw at me today. I learned you have to trust the people around you…you hope they’re your friends.”

Chase Briscoe, in the No. 77 Cunningham Motorsports Dodge, finished fourth in his Daytona debut. Frank Kimmel finished fifth in the No. 46 JUICE Batteries Ford for Team Stange, a brand new team for Kimmel.

“Today was pretty remarkable,” Kimmel said. “Our guys really fought hard for this. We didn’t have enough time to prepare for this race. We had great pit strategy…the General Tire ran great all day…we never put a tire on it. Thank the 22 car (Kevin Thomas, Jr.)…he pushed us really hard. Great day. Thanks to John and Ashley Stange for believing in me. We have our eyes on a championship.”

Bo LeMastus finished a career-best sixth in his own No. 42 Crosley Brands Dodge. Kevin Thomas, Jr., in a second Cunningham car, finished seventh in his series debut in the No. 22 Bakken Concrete-KT Construction Services Dodge.

Willie Mullins, with some help from his crew chief Andy Belmont, finished a career-best eighth in his Daytona debut in the No. 34 Bugsy’s Auto Repair-Crow Wing Recycling Ford. Gray Gaulding, who turned 18 on February 10, finished ninth in his series debut in the No. 38 Krispy Kreme Ford. Cole Custer rounded out the top-10 finishers in the No. 54 Haas Automation Chevrolet, a car fielded by Ken Schrader Racing.

Custer also won the Menards Pole Award presented by Ansell and led the most laps – 42 overall.

Townley spent much of the race outside the leader Custer, but once the Watkinsville, Georgia driver got to the bottom on lap 50, no driver could find a way around the eventual winner.

Will Kimmel was a strong contender all day, leading five laps in the back half of the race, but ran out of gas under five laps remaining, relegating the Sellersburg, Indiana driver to 18th in the final running order.

Despite a red flag for the aforementioned pile-up for 11 minutes, the race, which also included three cautions, was completed in one hour, 27 minutes and 45 seconds.

The next event for the ARCA Racing Series presented by Menards is on April 9 at Nashville Fairgrounds Speedway.