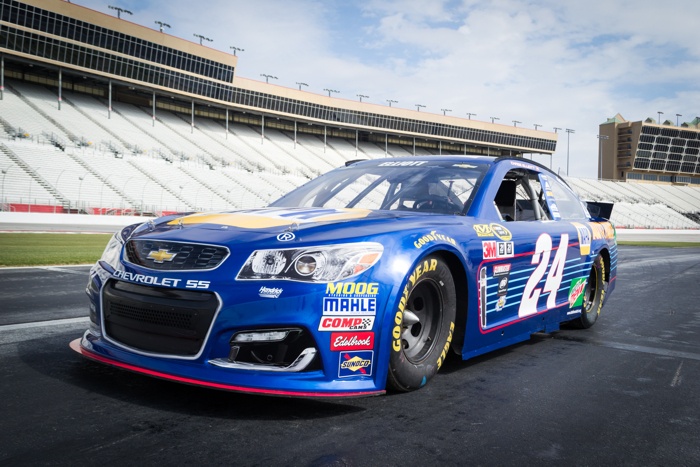 At just 20 years old, the Sprint Cup Series rookie becomes the youngest driver ever to win the Daytona 500 pole, after climbing behind the wheel of the No. 24 Chevrolet made famous by recently retired NASCAR icon Jeff Gordon for the first time.

Elliott, an AMS Thursday Thunder alumnus who raced Legend and Bandolero cars on Atlanta Motor Speedway’s quarter-mile Thunder Ring as recently as seven years ago, said he looked forward to his Atlanta Sprint Cup Series debut in the Folds of Honor QuikTrip 500 next weekend. In a way, he’ll come full circle.

“It’s always been a special place to me,” said the younger Elliott. “Dad and I have done a lot of racing here on the front stretch, whether it be a bandolero or Legends car. It’s odd, I guess, to think about being part of this Sprint Cup weekend. I can remember racing the Legends when the Cup cars were in town.

“We’re excited to be part of the show and hopefully put on a good one for the fans.”

Prior to Atlanta, looms this weekend’s season-opening Daytona 500. And while a visit to AMS was planned well before yesterday’s history-making qualifying run, Elliott said it couldn’t have worked out any better.

“It was great way to start things off,” he said of winning his first NASCAR Sprint Cup Series pole before visiting Atlanta the following day. “So it was cool that it happened like that.”

But the ever-modest Elliott gave all the credit to his team.

“Regardless, as I’ve said, yesterday had very, very little to do with me. It was about the 24 team, Hendrick Motorsports, the Hendrick engine shop for making it all happen,” he said. “Those are the guys that earned that. I have very little to do with that lap and qualifying. They’re the ones that earned it and I’m just excited to be a part of it.”

While the season-opener at Daytona kicks things off, Atlanta Motor Speedway will host the first non-restrictor plate race of the season just one week later. Combined with the new low-downforce aero package set to debut at Atlanta and Elliott’s first Sprint Cup Series race at a non-plate track, he said there is plenty to look forward to when he rolls onto the historic 1.54-mile track in less than two weeks.

“Daytona is its own animal, one of the biggest races, if not the biggest race of the year,” he said. “However, it’s kind of its own deal. A lot of the garage members and racers look at Atlanta as Week 1 for us. It’s the type of racetrack we’re going to see more often. We only see plate races four times.

“A track such as Atlanta, we’re going to see countless times throughout the year. Getting here, you’ll see more of how things are really going to go for teams and you’ll see how you really stack up amongst the competition.”

Larry McReynolds, TV analyst for Fox Sports and former NASCAR crew chief, who also made the trip from Daytona Monday, offered his view on what racing at Atlanta will look like from a unique standpoint.

“Atlanta Motor Speedway, I can say this coming here for a number of years as a crew chief and now going on 16 years as a broadcaster, and I’m not saying this because I’m standing on this stage: we don’t have bad racing at Atlanta,” he said. “When you look at the fact that they have reduced the downforce by roughly 25-30 percent, overall front and back from what we had last year, it’s going to put even more in the drivers’ hands.

“Atlanta Motor Speedway is a driver’s racetrack anyhow because the cars do start sliding around, the tires do give up, you do have options to move the car around bottom of the race track on fresh tires.”

The new rules package set to debut in the Sprint Cup Series in 2016 at Atlanta, McReynolds said, plays a large part in what he anticipates as a very competitive race.

“The whole premise behind this package is to hopefully create more side-by-side racing and more passing. If Kentucky and Darlington was any indication of that, I’m anxious to get here — and I think everybody is.

“You do have to take advantage of fresh tires after a restart, which has been the case for the last few years. You get all you can on the restart. You better have both hands and feet up on that steering wheel because we do know once you start sliding around, it becomes more of a challenge to pass.”

The elder Elliott, Bill, a five-time winner at Atlanta over his 36-year Sprint Cup Series career, took time to talk about the career his son is about to embark upon.

“Yesterday was a big deal for us,” he said. “You look back, two years and one month ago, we had nothing. NAPA came along and we were able to get them on board with Mr. Hendrick. Being able to go to run the XFINITY Series and what Chase was able to accomplish, winning a championship in his first year then adding some Cup races last year, it seems like things have really lined up.”

As for the challenge of driving at Daytona, Bill reiterated the accomplishment of simply finishing the race but focused more on getting to the second week of the season.

“Just to making it to the end of the race (at Daytona) is a challenge in itself,” he said. “Really, the racing starts the weekend we come to Atlanta the weekend after and you get more into a mode. It sets the stage for what to expect week in and week out. Daytona is such an unknown, which is what I’ve told Chase, really everything starts in Atlanta.”

And while the focus was largely on his son today, the NASCAR Hall of Famer couldn’t help but reminisce about his own days racing at his hometown track.

“I love racing here. It was always fun racing in front of the hometown crowd,” he said. “I’ve had good runs here. I’ve had bad runs here. Iv’e had everything in the middle. It’s been a race track where some races you love to hate. But it’s always a raceable race track. It’s what makes it a unique track and, from a fan’s standpoint, so much fun to watch.”

For Chase, it’s been all about soaking up as much advice from his peers and teammates as he can.

“They’ve all had a lot of great insight to give, whether it’s on the race track or off,” he said. “I had a question for Dale (Earnhardt Jr., his Hendrick Motorsports teammate) between qualifying sessions Sunday, and we talked about it. As I can tell, he’s been an open book with me. I’m sure he’s not going to tell everybody everything. There are some things you have to learn on your own, but he’s been great so far. They all have.”

Click the links below to view the Chase Elliott Media day test footage: